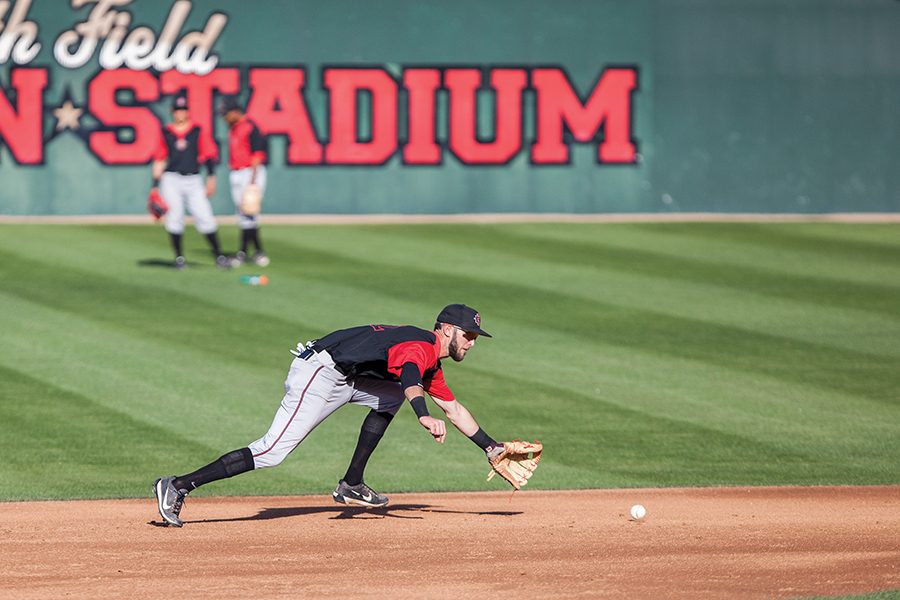 San Diego State baseball is accustomed to being at the top of the Mountain West Conference, but the team enters the new year hungrier than ever after a successful season ended in NCAA tournament heartbreak.

SDSU finished with a record of 42-21 – en route to winning its fifth Mountain West Conference tournament championship in six seasons – but the team ultimately fell to Long Beach State in the regionals of the postseason tournament.

This year the Aztecs are ready to build upon last seasons success.

Bible will be making his long-awaited return to the Aztecs, after he was unable to play last season while battling hodgkin’s lymphoma.

There will also be plenty of fresh faces in the clubhouse, as the team welcomes in 17 new players, among them 15 freshmen and two junior college transfers.

Head coach Mark Martinez said that this year’s underclassmen are going to have an immediate impact, although he understands that there may be some growing pains.

“Some guys are going to be thrown into the fire opening day,” Martinez said. “But they are going to have to stay on the process of learning and developing as players.”

Teammates like Bible will also be there to help guide the younger players.

Along with the sizeable incoming class, Martinez will have a strong core of returning players from last year’s squad.

Outfielder Chase Calabuig sported a .305 batting average with seven home runs and 38 runs batted in last season, and the senior is likely to play an important role again this year with experience in all three outfield positions.

Even with all the success the Aztecs have had in recent years, Calabuig said that this year’s team will remain focused on one game at a time.

“Obviously, the goal is to go beyond that (MW Tournament), but we must start with what is in front of us, and that’s the Mountain West Championship,” Calabuig said. “That’s the first step in getting to Omaha, so in order to get where we want to go we have to start small and grow from there.”

Another big returning piece on offense will be senior shortstop David Hensley, who played in 59 of 63 games last season while batting .357 with 16 doubles and 31 runs batted in.

On the pitching side SDSU will see the return of redshirt senior pitcher Jorge Fernandez, the teams go-to arm out of the bullpen.

Fernandez posted a 3-1 record with a 2.79 earned run average last year, and should remain a presence out on the mound again this season.

Third-year pitching coach Sam Peraza works with Fernandez and the other hurlers on the team, and has high praise for his staff.

“I’m always about attacking the strike zone, not giving up free bases, having the other team beat us,” Peraza said. “If (the pitchers) can control the running game and make the other team get three hits an inning to beat us, we will be in very good shape.”

The Aztecs first opportunity this season will come on Feb. 16, when the team begins a three-game series against University of California, Santa Barbara at Tony Gwynn Stadium.