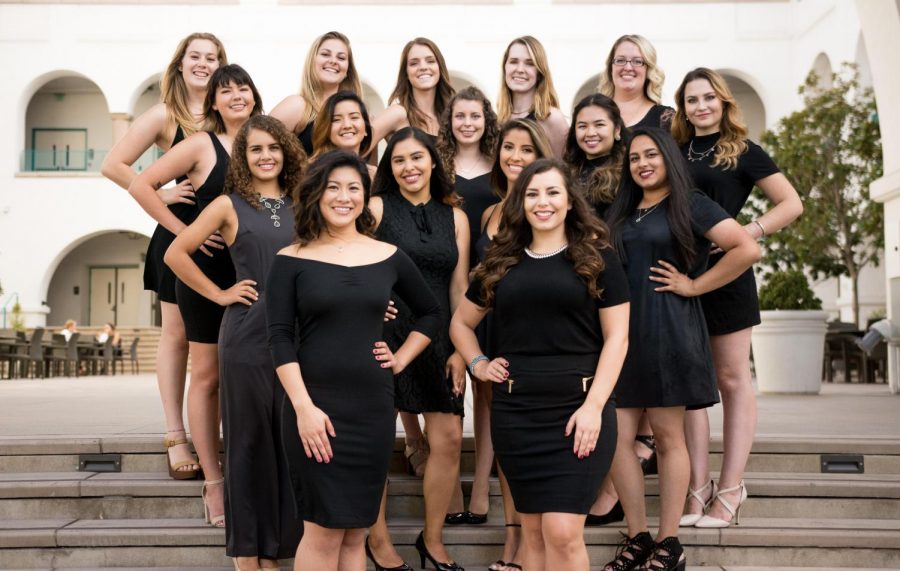 Sirens of State members pose for a group photo in the Conrad Prebys Aztec Student Union.

Sirens of State, the all-female acapella group of San Diego State, create friendships and bonds that are just as tight as its harmonies.

Although auditions were not held second semester, the group of 16 girls meets together every week to learn new songs, practice dance moves and prepare for upcoming events.

“One of our most important goals is fine tuning our sound and I think we definitely accomplished that as a group especially this semester” Vicky Caluag, child and family development senior and the group’s president, said.

Caluag has been in Sirens of State since her freshman year and has been president since the second semester of her sophomore year.

In addition to singing and arranging songs, the group is also focused on creating a sisterhood of singers.

“I love that we’re like a family, all the girls are super sweet and everyone has their own personality that they bring to the table,” kinesiology freshman Delilah Tholander said. “I love that Sirens is a music outlet when I have to go to school all the time.”

Tholander auditioned during the fall semester and is planning to continue with the singing group throughout her college career. She is most excited about creating arrangements and performing with her friends.

Jessica Stensby, a mechanical engineering junior, has been in Sirens for over two years.

“In engineering it is a lot of guys, like 85 percent guys, and it’s super fun coming to Sirens because I have all girls that I can talk to and hang out with,” Stensby said.

It’s more than just the music and performing, all three acapella groups on campus will get together and have parties and go to workshops and retreats together. Last year all three groups attended the Los Angeles Acapella Festival.

“(It was) really eye opening and fun because all three groups were together,” Stensby said. “There’s all different voices and styles of singing that everyone does and we did pop songs and they taught us how to pepper in different noises and stuff.”

The members of Sirens of State collectively decided to forgo competitions in their group because they felt that the competition lifestyle was too much of a stressor on every day college life. While they don’t compete, they still do performances and workshops in the San Diego and Los Angeles areas.

The group’s next performance will be at the Aztec Dance Marathon on Feb. 23 around 9:30 p.m.

In addition to performing at the Aztec Dance Marathon, Sirens hosts its spring showcase where the members perform every song they’ve learned throughout the semester. It is free and is open on April 7 at 7 p.m.