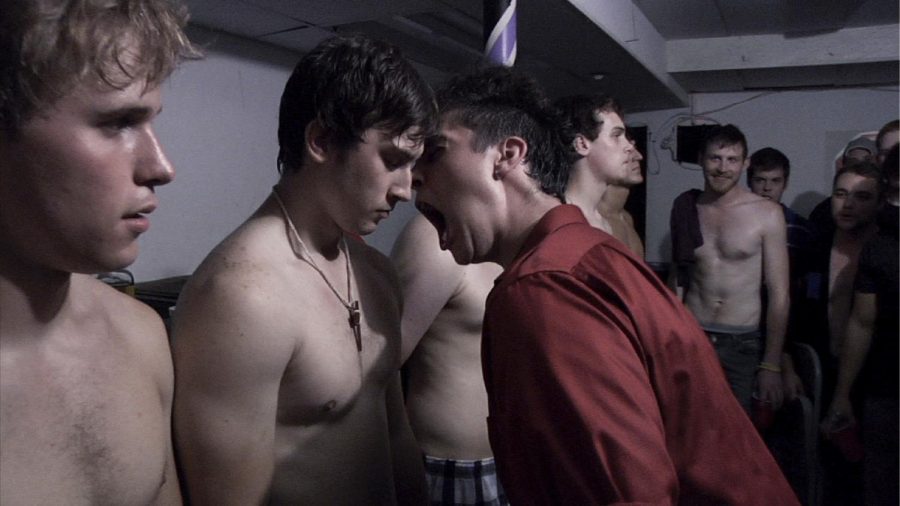 Still image of characters in "Haze" undergoing hazing rituals in their collegiate fraternity.

Love or hate it, the Greek system’s tight grip on American universities is undeniable. Perhaps nowhere is this more apparent than here at San Diego State, where approximately 15 percent of the population belongs to either a fraternity or sorority. For better or worse, the image of blonde heads and toned shoulders in matching t-shirts and custom backpacks is as attached to campus culture as sunshine and Mexican food.

As a member of the Greek community myself, I see many positive attributes to these organizations, namely their ability to foster community and encourage philanthropy. However, issues such as rampant sexism, racism and bullying make a solid argument that the risks of these institutions may outweigh their benefits.

Besides sexual assault, hazing is the most commonly cited abuse of the Greek system, especially in regard to fraternities. “HAZE,” a film recently released on Netflix, sheds light on the inhumanity of the practice in the hope of spurring institutional change.

“HAZE” explores the world of paddling and binge drinking in a drastically different fashion than the likes of “Animal House.” A gritty pseudo-documentary retelling of the Greek tragedy, “The Bacchae,” it follows naïve freshman Nick Forest as he pledges a fraternity. As the harrowing pledging process intensifies, however, Forest is forced to decide between brotherhood and conscience.

Drawing on his experiences in a fraternity at Indiana University, David Burkman directed, wrote and produced “HAZE.”

“I actually had a great time in my frat,” he said. “I even have twistedly fond memories of a lot of the hazing I went through. Having had some distance from it though, I do see that it was very dangerous.”

Long perpetuated by a “boys will be boys” mentality, hazing is not a laughing matter.

Stophazing.org, a leading resource for the research and prevention of hazing, defines the practice as “any activity expected of someone joining or participating in a group that humiliates, degrades, abuses or endangers them regardless of a person’s willingness to participate.” Its most common forms include extreme alcohol consumption, humiliation, isolation, sleep-deprivation and sex acts. The same organization estimates that 76 percent of Greek students have been hazed at least once.

The issue became painfully clear in 2017, with four fraternity-hazing related deaths at high-profile universities. While these tragic events weren’t the sole reason Burkman made the film, he does acknowledge their role in informing its tone.

“The vast majority of movies about Greek life are either comedies or campy horror films,” he said. “I knew that there was an opportunity to do a movie that was more grounded in authenticity.”

While filmmakers have the artistic liberty to portray their subjects in any tone they wish, there’s an element of social responsibility involved with subjects that are so closely linked to damaging and potentially fatal behaviors. Burkman therefore set out to convey the pledging process as he sees it—operant conditioning.

“Hazing is not something that starts out crazy on day one,” he said. “No one would stick around. It starts out with fun and funny stuff and then is constantly ramped up. By the time you get to the really tough stuff, you’re really committed.”

Fraternities essentially keep their pledges coming back for more by alternating punishments— trading cleaning the house with a toothbrush or drinking puke out with rewards, parties and free shirts.

“Fraternities didn’t invent this system,” Burkman said. “It’s been proven throughout history to be an effective way of making people loyal to a leader.”

Universities’ attempts to address the issue tend to take the form of improvident statements, temporary punishments and “required” workshops with about as much authenticity as an after school special.

Burkman’s team has thus taken “HAZE” on the road, screening it at over 50 colleges.

“What’s unique about ‘HAZE’ is that unlike a lot of programming that the schools do, it’s just a cool movie,” he said. “People are easier to reach if they’re being entertained, making them more open to having a discussion.”

“Greek life is here to stay,” Burkman said. “I think that if we tried to ban it then the darker parts would just go underground. My hope is that we can find safer, healthier, more meaningful ways of challenging pledge classes.”

Psychology junior Meghan Ursa is president of the Kappa Alpha Theta sorority at SDSU. She said no sort of hazing should be tolerated in Greek life, and the national attention the act has been getting is a good thing.

“I think that with all of the national coverage it’s been getting there’s been a lot more changes to try and prevent it, but I feel like there are still lots of leaps and bounds we still need to make going forward,” Ursa said.

She said her chapter has a zero tolerance policy.

“I don’t believe that any sort of hazing should be done if you want your members to actually feel welcomed into your organization,” Ursa said. “You don’t want them to feel like they have to jump through all these hoops to become a part of it.”

While I don’t view “HAZE” as a wholly accurate representation of the Greek system, mostly due to the extremism of the hazing acts depicted, it succeeds in shocking the audience in a constructive way, revealing the inherent cruelty of this behavior.

I don’t see it as a revolutionary film but rather an effective tool for rallying students behind the anti-hazing movement. If the looming lettered houses want to keep their place on The Row, change is a necessity.