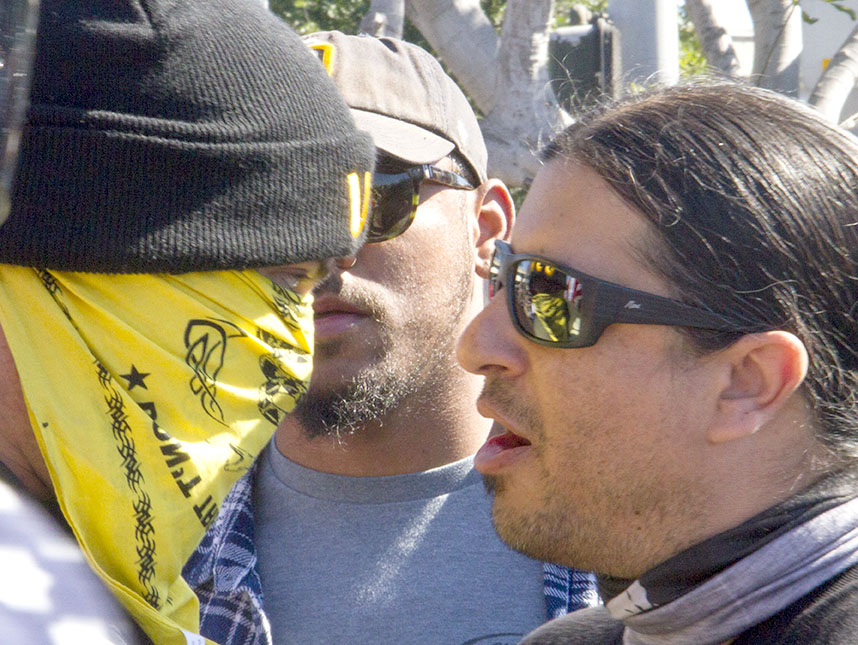 Two protesters confront one another at Chicano Park on Saturday.

Two opposing groups of protesters clashed in Chicano Park over the weekend, resulting in three arrests — including one after a police officer was punched in the face.

A few dozen people, part of a “Patriot Picnic” set up by a right-wing group known as the Bordertown Patriots, arrived at the park around 9 a.m. Saturday to call for raising the American flag over the local landmark.

“There’s a couple groups of people that have claimed this park as Mexican territory and they kick people out that carry American flags,” said Ed Baker, part of the Bordertown Patriots’ demonstration. “They’ve got their own park. That’s no big deal. But when you start kicking people out of a public park, that’s an issue.”

A flag of Aztlan, the mythical homeland of the Aztecs, flies on the park’s main flagpole, while an American flag is close by at a veterans’ memorial in a corner of the park.

An estimated 700 counter-protesters also showed up, and they quickly outnumbered the Patriot Picnickers.

Georgette Gomez, who represents the College Area on the San Diego City Council, said she was there to defend the park and its history.

“This is a historical park that comes from a lot of tears and sweat by the people in the ’70s, when the community was abandoned by the government for many, many years and this park is a creation of the community,” Gomez said.

She questioned why the flag flying in the park is even an issue.

“You step outside of here, you’ll see a flag,” she said. “They’re just trying to prove a point, and I think that point does not belong here in this particular space.”

Dozens of officers were present at the two demonstrations to separate the two sides and keep the peace.

Both sides were mostly violence-free, but when they Bordertown Patriots began to leave, clashes began occurring — even with a police escort.

Two people began striking each other with a motorcycle officer in between them.

Another person tossed eggs at the right-wing protesters as they headed away from the park.

“I think it’s disappointing, but expected,” said a woman in the Patriots group who asked only to be identified as ‘Lisa C.’ “Both sides aren’t going to come together and not have any issues. When the cops can’t watch each side perfectly, there’s going to be a little action.”

Nicole Orsi, one of the counter-protesters, said she was at the park to demonstrate against the “white supremacists” she heard would be there.

“Supposedly, they say that this park is anti-American and that they feel threatened by it,” Orsi said. “But I feel the opposite, that Chicano Park belongs here. Diversity is what makes America a great place to live.”

The Bordertown Patriots said no white supremacists were at the event, and any who showed up would not have been allowed in.

“Those are rumors that were debunked on the spot,” said demonstrator Jourdin Davis. “There’s no neo- Nazis or white supremacists here at all, or anybody who stands behind that philosophy,” Davis said.

He said he traveled all the way from the Bay Area to have “a nice, peaceful picnic at a park that’s still on American soil.”

But for Luis Miguel Tovar, who was at the park as a traditional Aztec dance performer, it’s not so simple.

“For us, this is one of our sacred spaces here in San Diego,” he said. “We’ve been here for hundreds, if not thousands of years. This is Native American land.”