No announcement yet on mascot task force

Officials originally said decision would be made by Feb. 2 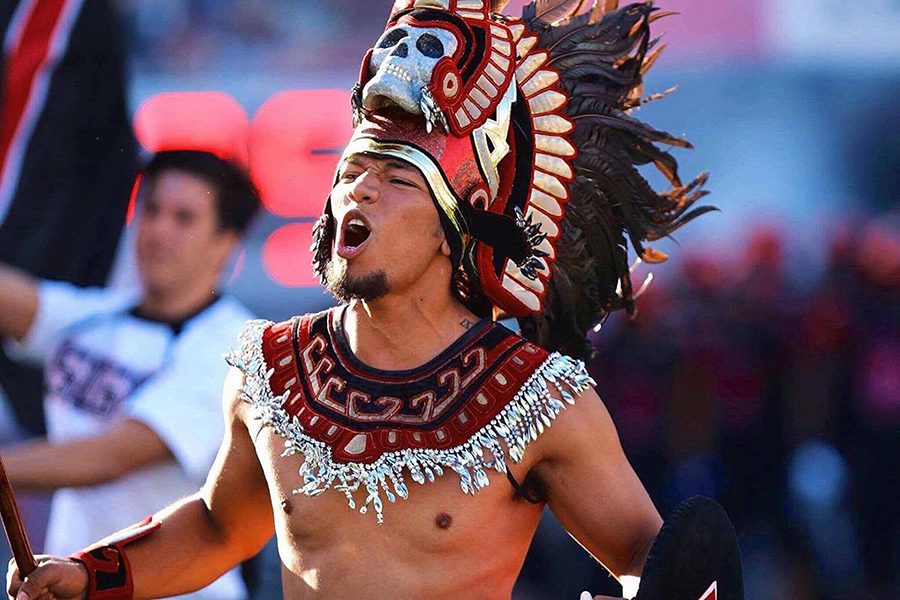 A man portrays the Aztec Warrior mascot at a sporting event in spring 2017.

San Diego State officials have not yet announced the members of a task force to explore the appropriateness of the Aztec Warrior mascot.

The university had previously said in a press release that an announcement would be made by Feb. 2.

In November, the University Senate passed a non-binding resolution to retire the use of the human Aztec Warrior mascot and called for the creation of the task force.

The university announced on Jan. 17 in an SDSU Newscenter article that they were seeking nominations for members to be on the 17-member task force. Director of Media Relations Jill Esterbrooks said President Sally Roush is currently in the process of seeing if those who were nominated want to be on the task force.

“We may have been a little ambitious in saying we would have an announcement Feb. 2,” Esterbrooks said.

University Senate member and women’s water polo head coach Carin Crawford said the large number of members could be contributing to the delay.

“(The issue) could be simply trying to coordinate a lot of schedules of nominees and the simple logistics of getting together that many people from quite a variety of factions, departments and agencies across campus,” Crawford said.

However, she said this delay should not result in worry.

“While we are past the deadline, I think we’ll hear news soon and I don’t see any reason to be concerned about a lack of transparency,” Crawford said.

Victoria Gonzalez-Rivera, associate professor in the Department of Chicana and Chicano Studies, said the nomination process highlighted one of the central issues of the mascot debate regarding who has the authority to speak on part of the Aztecs. She said, in reviewing statements from task force nominees, she found a number of the nominees wrongly identifying themselves as being of Aztec ancestry.

“Several of them were very enthusiastic about ‘being Aztecs,’ which led me to believe that, not only do they have no real interest in learning about real life native peoples, but they are attempting to impersonate them without regards for the consequences,” Gonzalez-Rivera said.

While Gonzalez-Rivera said she believes it is important for task force members to be well-versed in the history of the Aztecs, what qualifies expertise in this situation has become an open question.

“I have a feeling that most of the members on the task force have never picked up a book written by someone who has academic credentials about the history of the Aztecs and has actually read that book,” she said.

Gonzalez-Rivera said San Diego State has opted to give voices to stakeholders in the issue rather than purely experts. However, Crawford said this approach is necessary to make a fair decision.

“This seems to be the best way to gather together representatives of various stakeholders and hear their opinions and maybe revisit this issue with maybe the lense of 2018 rather than 2003 and see if attitudes and cultural opinions have changed,” she said.