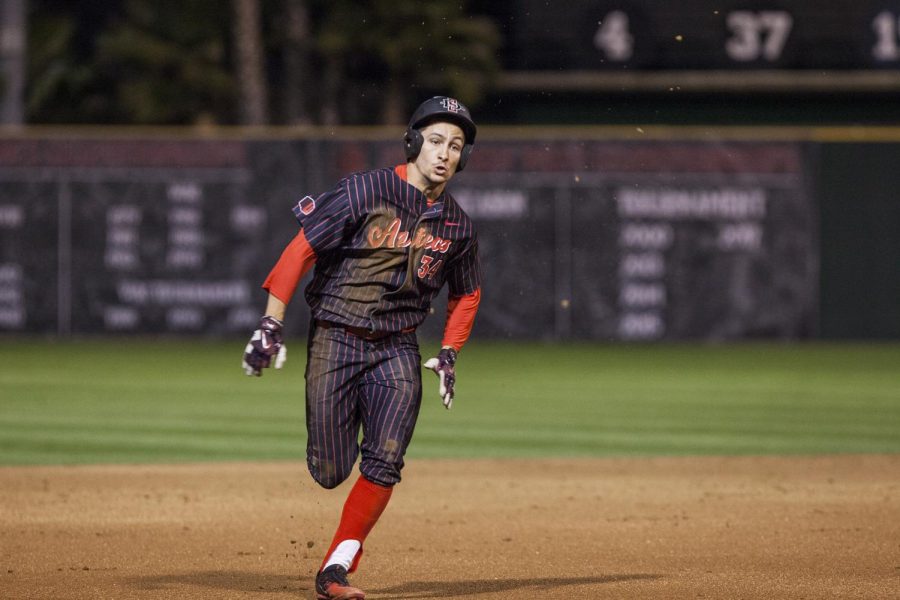 Senior outfielder Chase Calabuig runs the bases during the Aztecs 9-1 victory over UCSB on Feb. 16 at Tony Gwynn Stadium.

San Diego State baseball came away with a 7-5 victory on Sunday against UC Santa Barbara, completing a three game series sweep in front of 1,384 fans at Tony Gwynn Stadium.

SDSU remains undefeated with a record of 3-0, while Santa Barbara falls to 0-3 to start the new year.

“We tell our guys all the time winning is extremely difficult, it’s hard to beat somebody three times,” head coach Mark Martinez said. “Santa Barbara’s a great program, it’s a testament to our kids coming out with the right attitude.”

The Aztecs started junior pitcher Garrett Hill (1-0) – a transfer from Santa Rosa College – who came away with a victory in his first career start in the scarlet and black, finishing with six strikeouts in five innings pitched while giving up two unearned runs.

“(Hill’s) a perfect Sunday guy, he’s going to pound the strike zone,” Martinez said. “He’s a good addition to our program and I think he’ll kind of settle into that Sunday role.”

It was the second home run in as many games for Calabuig (2-4, two RBI, two runs), who said that he is locked in at the plate so far in his farewell season on the Mesa.

“Up at the plate I feel like I’m being slow,” Calabuig said. “I’m seeing the ball really well letting it travel deep and seeing the results.”

Calabuig hit a combined .538 over the three game series to lead the team in batting average.

The two RBI’s were the first of Rudick’s career, and Calabuig heaped praise on the Scripps Ranch High School product.

“That kid is a baller, that dude works so hard and he wants to do the best he can each and every at bat,” Calabuig said. “Sometimes you’ve got to be able to slow him down and hold him back a little bit but he’s an unbelievable baseball player.”

Clements was unable to get out of the third inning, and left after 2.2 innings pitched with seven hits and four runs given up (three earned).

UCSB was able to get a two-out rally going in the top of the fourth inning, and cut the Aztecs lead in half after a bases loaded single by redshirt junior outfielder Thomas Rowan brought in junior outfielder Michael McAdoo (2-3, two runs) and sophomore catcher Eric Yang (2-4, two runs) for the Gauchos first two runs.

After a sacrifice fly from Calabuig scored sophomore outfielder Julian Escobedo (0-2, two runs)in the bottom of the frame, Hill struck out the side in the top of the fifth for his final inning of work.

Hill left the game with a 5-2 lead, and said that the strong run support helped ease the pressure he was feeling from his first ever start.

“(I) got a lot of early support from the team and that was a huge help just a weight off my back, just let me do what I do,” he said.

The team’s traded runs in the sixth inning, with redshirt junior designated hitter Clay Fisher (1-5, one run) scoring on a sacrifice fly from Rowan in the top of the frame.

The Aztecs were given new life in their half of the inning after freshman third baseman Jason Willow dropped a two-out foul popup from Escobedo.

Escobedo went on to draw a walk before coming home on a double from senior shortstop David Hensley (1-5, one RBI) to give the team a 6-3 lead.

Nevarez came home on a bases loaded groundout by Schmitt in the bottom of the seventh, before the Gauchos once again tightened the gap with two runs of their own in the top of the eighth.

Senior pitcher Jacob Erickson found himself in trouble in the inning, after Yang singled and McAdoo doubled to give the Gauchos a second and third opportunity with only one out.

Redshirt freshman first baseman Cole Mueller (0-3, one RBI) was credited with an RBI after hitting into a fielder’s choice to score Yang, while Rowan singled to center field to score McAdoo from second base for his final RBI of the night.

Redshirt junior pitcher Justin Goossen-Brown came in to relieve Erickson, and closed out the inning before earning his first save of the year in the ninth.

The Aztecs will take a day off before welcoming local rival University of San Diego to Tony Gwynn Stadium on Feb. 20.