Discovering mi familia and myself in Guatemala 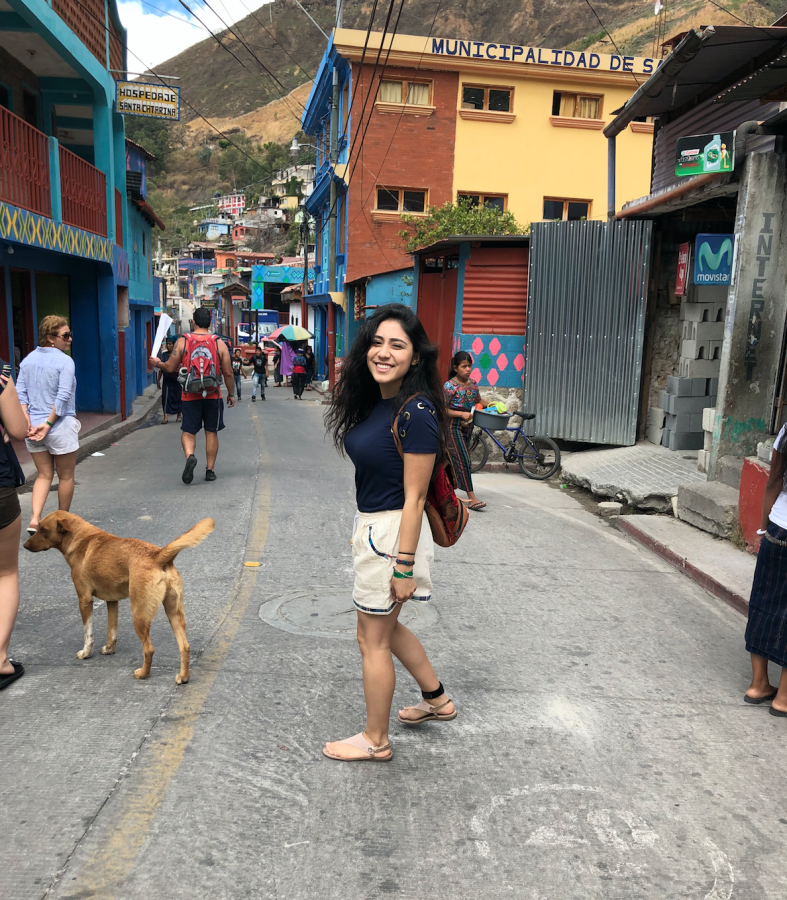 As the sun set, we looked out to the lake, engulfed on the horizon by three volcanoes. We had arrived at a restaurant, anxious to finally eat after a three-hour car ride. It hadn’t been one minute since we sat down at a table when two little girls approached us, showing us bracelets, pens, keychains and clothing they were selling while carrying baskets on their heads.

Their faces lit up when we asked what they were selling and for how much, hoping they would get their first sale of the day. I looked at them, amazed by how young they appeared. I asked them how old they were. They said 12 and seven.

Those are the two names I remember most from my trip to Guatemala two weeks ago.

I decided to go to Guatemala with my family for my cousin Rodrigo’s wedding. I had just met him less than a year ago, after my dad found out a year prior he had a younger sister. My dad’s sister, Rodrigo’s mother, had become family to us in a short amount of time, and we would take any opportunity to go to Guatemala and spend time with them.

However, as the week went by, I became nervous because of all the work I was missing at school. At 2 p.m. on the Monday I was there, I thought “I should be in JMS 430 right now,” since I had the class at 12 p.m. and there was a two hour time difference. The next day, I thought “I am going to fail all of my classes for missing one week of the semester.”

But that one week gave me a different perspective. It exposed me to an experience I wouldn’t forget and one I would appreciate so much.

Cecilia and Rosario were sisters and had arrived at Panajachel, Lake Atitlán, Guatemala earlier that day after getting out of school at noon in a nearby town called Santa Catarina Palopó. Their job now was to sell as much as they could to tourists in order to bring as many quetzales back to their family. The quetzal is Guatemala’s currency.

As they were scrambling through their baskets to show us what they were selling, Cecilia and Rosario kept talking back and forth in a language I couldn’t understand. I asked Cecilia what she was speaking, and she said Kaqchikel. Kaqchikel is their native language. They learned to speak Spanish growing up and were now also learning English in school.

After they told us the languages they knew how to speak, my tía Liily, my dad’s sister, said “Wow, oh my gosh.”

Cecilia replied in Spanish with “I know what that means.”

I smiled at her. I just wanted to hug her. I told her I liked her dress, and she thanked me with the biggest smile I had seen in a long time. She said it was brand new and her mom had just made it for her.

Rosario followed Cecilia’s lead in selling her items, and Cecilia made sure we were buying from her little sister as well.

After we bought several items from both of them, they thanked us and ran to their mother.

Two minutes later, Cecilia came running back to our table and wrapped a scarf around my uncle’s neck.

She told him not to tell her mother she was giving it to him because she would get mad. She then said it didn’t matter to her because we were so kind with her and the scarf was hers to sell.

Cecilia and Rosario’s smiles put a smile on my face for the rest of the night. Their resilience amazed me. But most of all, their kindness left me speechless.

I think about what I was doing when I was seven, and I was playing with my cousins outside while my aunt prepared us lunch after school. When I was 12, I was completing my homework, worried about the test I would have the next day.

And Cecilia and Rosario were worried about selling enough items in order to bring as many quetzales back to their family.

Despite struggling to support her family, Cecilia gave us a scarf to thank us for our kindness.

The next morning, I saw them again when we took a trip to the town they are from.

Rosario ran up to me and gave me a hug, remembering who I was.

She took a photo with me, and then the bell rang. She ran back to school and looked back to wave goodbye, with the biggest smile on her face. My smile reflecting hers, I waved back.