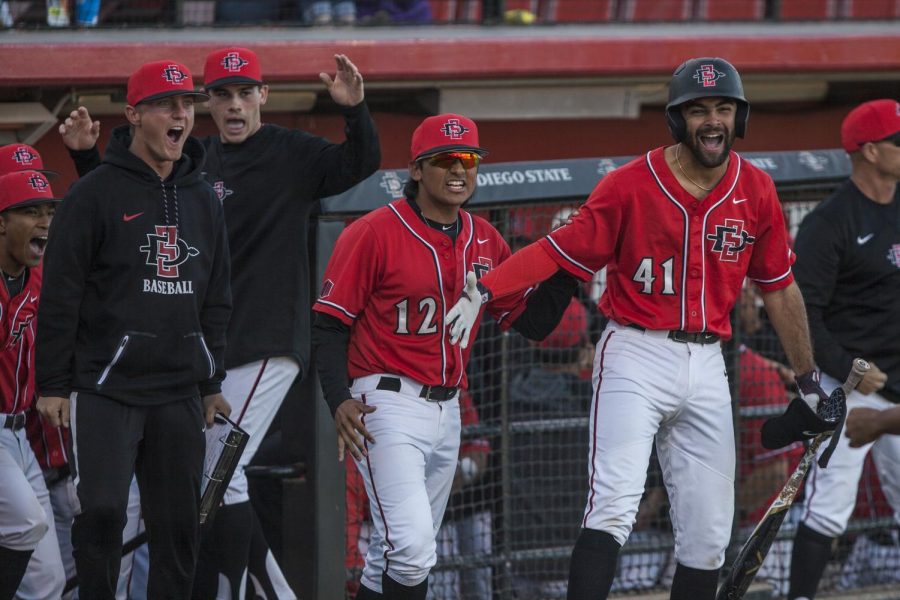 SDSU players celebrated outside the dugout amidst a four-run eighth inning during the Aztecs 5-4 win over Grand Canyon on Feb. 25 at Tony Gwynn Stadium.

San Diego State baseball used a late rally to come from behind and win the final game of the 2018 Tony Gwynn Legacy, defeating Grand Canyon University by a score of 5-4 at Tony Gwynn Stadium on Feb. 25.

The Aztecs were facing a 4-1 deficit going into the bottom of the eighth inning, but were able to push four runs across to take the lead.

Redshirt junior outfielder Chad Bible played pinch-hit hero for SDSU in the inning, coming in with two outs and delivering a two-run double to left center to tie the game at four apiece.

“It was huge for the Aztecs today,” Bible said. “I’m happy that I contributed to this win, it meant a lot for the team, especially since we weren’t playing our A-game today.”

Senior outfielder Denz’l Chapman came in to pinch run for Bible, and scored the eventual game winner after beating the throw to the plate following a single by sophomore outfielder Julian Escobedo.

“Everyone’s contributing, everyone’s trying to get on, so the least I can do is get a hit and hopefully get the game winning hit,” Escobedo said.

SDSU improves to 5-2 on the season with the win, while Grand Canyon falls to a record of 2-5.

“I think we showed a lot of character,” head coach Mark Martinez said. “I think we came out a little bit flat, but what I did tell the team is that good teams can win ugly, and I feel like we have a pretty good program and we are headed in the right direction.”

Freshman pitcher Casey O’Sullivan (1-0) came on in relief in the seventh inning and was credited with the first win of his career, while Jorge Fernandez came on in the ninth to record his first save of the season.

Mick Vorhoff (0-2) was saddled with the loss for the Lopes after giving up two hits and one earned run in one inning of work.

Junior transfer Garrett Hill got his second career start for the Aztecs, and gave up three runs in four innings pitched.

Hill struck out nine, including the first four batters he faced, before striking out the side in the third.

“I love striking guys out,” Hill said. “ (It) just makes me feel like I’m better than you.”

The Lopes loaded the bases on Hill in the fourth, scoring their first run of the game after sophomore outfielder Quinn Cotton singled and stole second base, before coming home on a single to center by junior infielder Zach Malis.

Grand Canyon loaded the bases again in the fifth, and chased Hill from the game after he gave up four straight singles to start the inning.

Flores limited the damage, allowing only one more run to score in the inning, after a sacrifice fly by junior outfielder Preston Pavlica brought home sophomore outfielder Kona Quiggle.

“He was awesome, he saved me from potentially a huge inning,” Hill said. “That to me was a turning point that helped us to be able to in the end get the victory.”

O’Sullivan came on for the Aztecs in the seventh inning, allowing one run after Cotton scored on a double from junior infielder Tyler Wyatt.

Grand Canyon loaded the bases again in the eighth inning, but O’Sullivan was able to escape the jam after striking out Evans to end the threat.

The Aztecs return to Tony Gwynn Stadium tomorrow to play the University of Michigan.