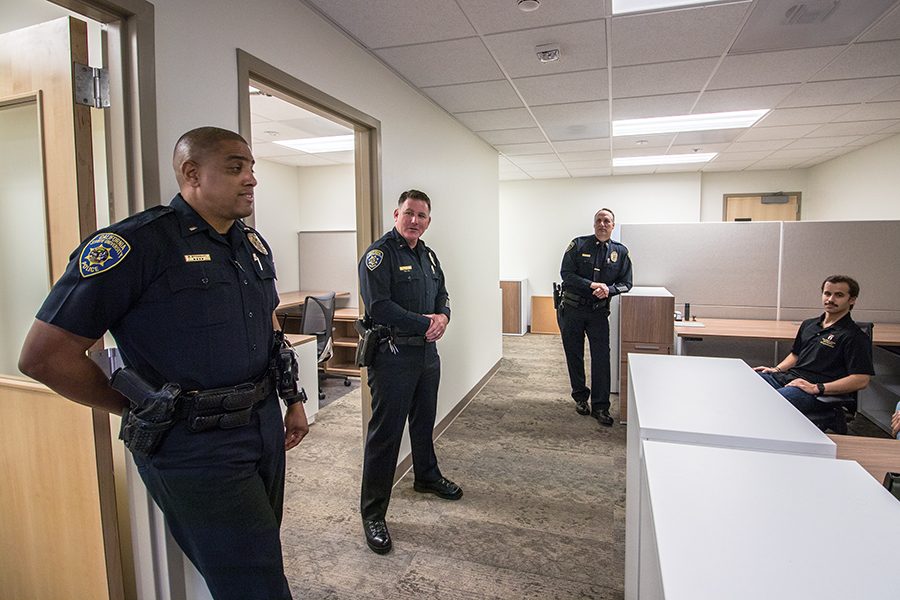 From left to right: SDSUPD Lts. Ronald Broussard, Matthew Conlon and Chuck Kaye, along with Ryan Janics, a student inspection assistant for the Office of Housing Administration, at the police department's new substation Monday.

Raquel Herriott, an SDSUPD spokesperson, said the new location allows members of the SDSU community better access to police services on the east side of campus.

“As the on-campus population increases, the SDSU Police Department would like to ensure community members are aware of our agency’s safety services and resources,” Herriott said in an email.

She said the substation will include a small reception area where visitors will be welcomed by a student community service officer, an office for the community resource officer and multiple workstations for staff and volunteers.

There will be space for the community resource officer to host a variety of events, she said.

“Our goal is to increase positive interactions and create an approachable environment for our diverse community,” Herriott said.

SDSUPD Capt. Chuck Kaye said the new station is a useful addition to the department.

“There’s a lot of activity over here not just during the day but on the weekends, and (the substation) will give us the opportunity to have a location where we can be quicker to respond to some of the issues that occur on this side of campus,” Kaye said.

He also said the station will allow officers to go in and out throughout the day to write reports and do their work without having to go to the opposite side of campus.

Mechanical engineering freshman Krysta Rhodes said while she understands why university police to want to make their presence known throughout SDSU, she’s unsure if the new station is a good idea.

“I don’t want incoming freshmen next year to walk to their dorms and wonder why they’re surrounded by cops and cop cars along the street,” Rhodes said. “There needs to be a balance so that students don’t feel intimidated.”

Still, she said she would rather have too much of a police presence at SDSU than not enough.

Civil engineering freshman Naomi Tanaka said she thinks the expanded presence on the east side of campus will make students feel safer.

“There are some sketchy people who will sometimes approach you,” Tanaka said. “I’ve never felt unsafe, but I feel like having the station nearby will help some people who do.”

“I think it’s a super important time right now to have more police around when there’s all this bad stuff going on in the country,” Mahoney said. “I feel like a lot of students don’t always feel as safe right now due to the shootings that have happened, so that’s why it’s important to have more officers around looking out for our safety.”