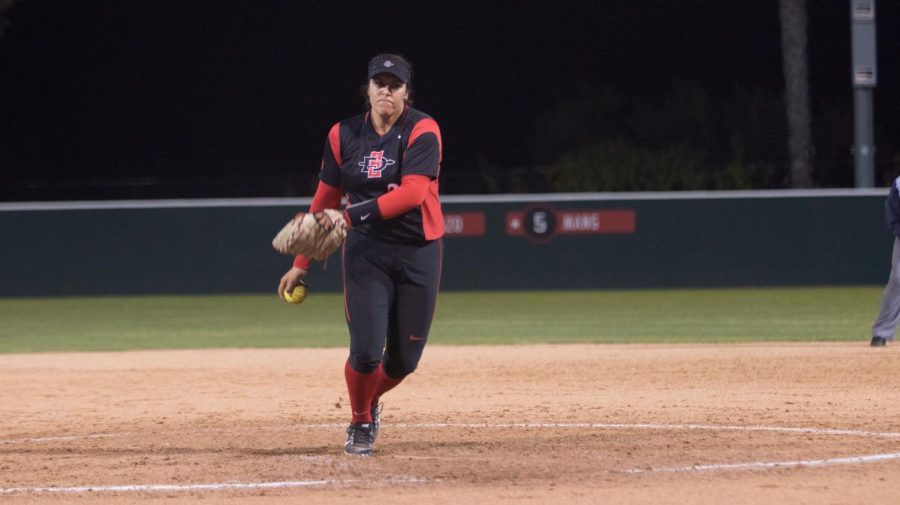 Sophomore Marissa Moreno prepares to throw a pitch during the Aztecs 2-0 loss to Cal State Northridge on March 2 at SDSU Softball Stadium.

San Diego State softball went 1-1 in a double header Friday night, with a 6-2 win over the University of Minnesota and a 2-0 loss to Cal State Northridge at SDSU Softball Stadium.

The games came on day two of the San Diego Classic, and the Aztecs are now 2-1 in the tournament and 8-11 overall.

Redshirt junior second basemen Katie Byrd came up clutch for SDSU against Minnesota, hitting a three-run triple with two outs in the bottom of the fourth inning.

“I love being able to come through for my team,” Byrd said. “That’s probably the best feeling, just being able to make something happen for your team when they need it.”

Sophomore pitcher Marissa Moreno gave up two runs in the first three innings, before senior pitcher Alex Formby came in and held the Gophers scoreless for the rest of the game.

The Aztecs hit the ball hard against Northridge in the nightcap, but were unable steer clear of the Matadors gloves when they needed big hits, leaving five on base.

“It’s really frustrating,” Formby said. “But it’s also kind of nice to see your offense hitting the balls hard. It still feels like you have a shot and at any moment any of those balls could fall and the game would be completely different.”

Aztecs head coach Kathy Van Wyk said that she was pleased overall with her teams performance.

“I’m pleased because we’ve been struggling so much offensively, and today I thought we made really good progress to play Minnesota’s pitchers and hit them as well as we did,” Van Wyk said. “In the game against Northridge, we hit the ball really hard, so I’m pleased, but we couldn’t get the hit we needed.”

Byrd and Formby said that fatigue of playing two games in one night did not play a role in the loss against CSUN, but Van Wyk disagreed.

“When I looked at them and saw the energy, it looked like we were tired,” Van Wyk said. “I did not like our energy.”

SDSU will look to re-energize when they retake the field tomorrow for a head to head with Boston University.