Students to take part in gun violence walkout on Wednesday 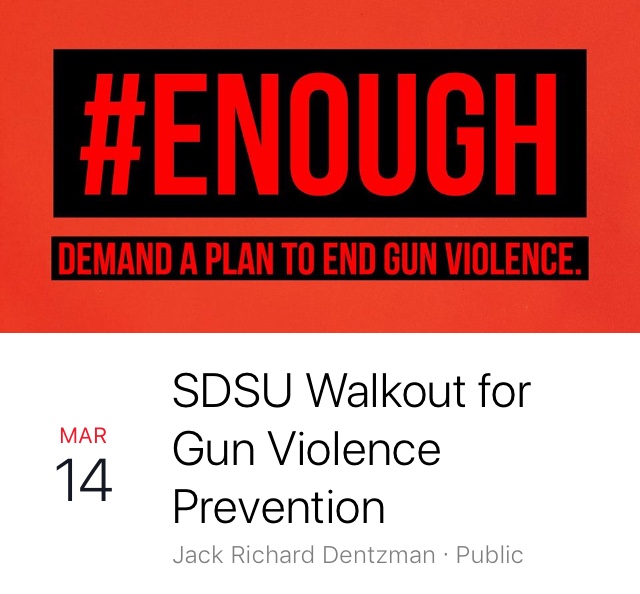 A screenshot of the Facebook event for Wednesday's gun violence walkout event.

For 17 minutes this Wednesday, students at San Diego State will join thousands around the nation in abandoning their classrooms to commemorate the 17 people who lost their lives in Parkland, Fla.

“I wanted to do something about this,” said management sophomore and walkout organizer Jack Dentzman. “I couldn’t just sit there and do nothing.”

The walkout will occur from 10 to 10:17 a.m. outside of Hepner Hall on Wednesday, March 14. Dentzman said this event does not promote any particular stance on gun control and that people of all different viewpoints are encouraged to participate.

With thousands of schools nationwide partaking in walkouts this Wednesday, the approaches to the event have been vast. Some have encouraged protesting, although Dentzman said the goal of his walkout is to get people talking to their representatives through writing postcards and registering to vote.

“Here, at SDSU, I wanted to make something that was really educational and kind of inclusive to everyone,” Dentzman said. “I wanted to stay away from the ‘rally’ aspect of it.”

Interdisciplinary studies junior Lauren Ybanez similarily said she thinks it would be important to attend an event like this since it would be good to raise awareness and stand in solidarity with those who have been affected by mass shootings.

For those who plan on attending, Dentzman said professors should be informed of any intent to miss class. However, he said all professors have been notified of the event through an email sent out this Friday.

He also said participants should wear orange: the color for gun violence prevention.

“It’s not an anti-gun event,” Dentzman said. “It’s an event to honor the 17 individuals who lost their lives. Regardless of anybody’s political beliefs, everyone is welcome.”