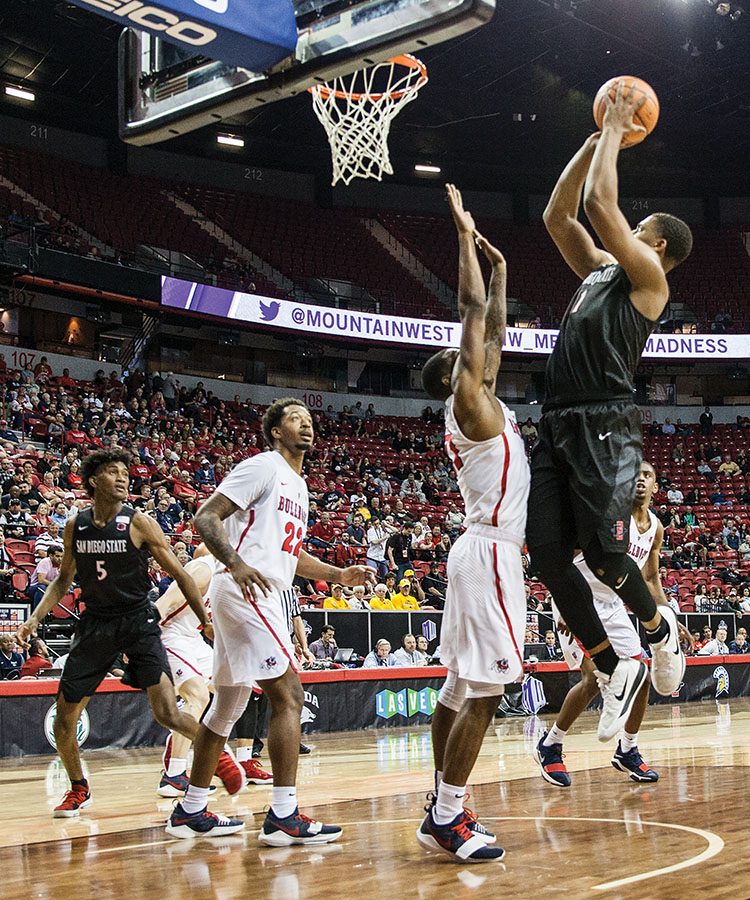 Freshman forward Matt Mitchell goes up for a shot during the Aztecs 64-52 victory over Fresno State on March 8 at the Thomas & Mack Center in Las Vegas.

The Aztecs (22-10) head to Wichita on a nine-game win streak, and are coming off their first Mountain West Conference tournament championship since the 2010-11 season.

Houston (26-7), meanwhile, comes into the tournament on a down-note, after losing by a single point to the University of Cincinnati in the championship game of the American Athletic Conference championship on March 11.

The Cougars are led by Kelvin Sampson, who has changed the culture of a team which was 13-19 in his first year as head coach back in 2010.

“They are extremely physical, they double in the post, they’ve got really strong guards that can shoot it and drive it and they defend at a high level,” Dutcher said. “They reflect their head coach, (Sampson)… I’ve got great respect for him and what he’s done with that program.”

Sampson is most well known for his tenure as the head coach at the University of Oklahoma, where he led the program to the NCAA tournament in 12 of his 13 years at the helm.

Dutcher, meanwhile, will be making his first appearance as a head coach in the tournament, though he has gone to the big dance eight times already as an assistant coach for the Aztecs.

“This is my first tournament, and I’m excited to go against a great coach in (Sampson), and I take great comfort that I have a really good team to do it with,” Dutcher said. “Hopefully they will make a first-time head coach look good.”

Houston is led on offense by senior guard Rob Gray, who averaged 18.5 points per game this season, and recently scored 33 points in the Cougars AAC semifinal victory over No. 11 Wichita State.

“(Gray’s) a dynamic guard, he’s great going downhill on the fast break, you give him momentum going forward… hell get to the rim on anybody,” Dutcher said.

One thing that Houston does especially well is shoot from behind the arc. The team has made 278 three-pointers this season, with 102 of them coming from junior guard Corey Davis Jr., and 82 from sophomore guard Armoni Brooks.

To put those numbers into perspective, the leading three-point shooter for the Aztecs is freshman forward Matt Mitchell, who has made 49 shots from behind the arc this season.

“(Houston) plays tough, they shoot threes, they make them,” Mitchell said. “They’re just a really tough team, and I think we’re just going to have to go match that in Wichita.”

The Cougars are also known for their physicality and block-out ability, which will put extra strain on SDSU players like freshman forward Jalen McDaniels and senior forward Malik Pope.

“They do such a good job of boxing out that well have to find a way to work ourselves around their bodies,” Dutcher said. “(McDaniels’) going to hit a forearm on the way in (the post), and then he’s got to either fight his way off it and still pursue the ball or give in. I think hell continue to fight.”