NCAA tournament at Viejas: No. 5 West Virginia advances with 94-71 victory over No. 13 Marshall 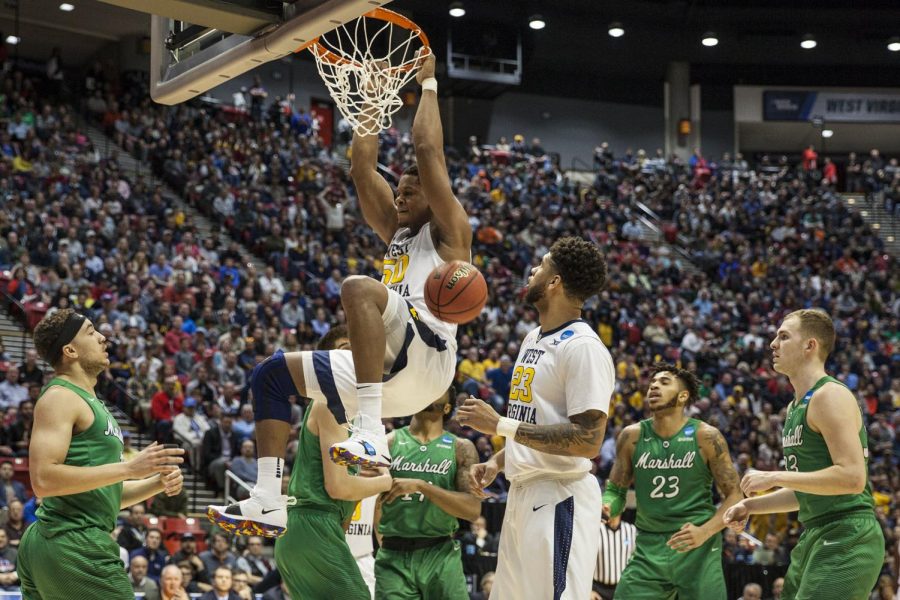 Junior forward Sagaba Konate dunks the ball during the Mountaineers 94-71 victory over Marshall on March 18 at Viejas Arena.

West Virginia sophomore forward Sagaba Konate pulled down an offensive rebound and went right back up. His shot was blocked, but after getting his own rebound he went up again, this time making sure no one else got a hand on the ball as he slammed it through the net.

Konate let out a thunderous scream, drowning out the Thundering Herd and the contingent of green-clad fans which followed them to Viejas Arena for the NCAA tournament Round of 32.

The dunk extended a West Virginia run to 13-0, flipping a five point deficit to an eight-point first half advantage.

Six unanswered points later and the run was 19, the lead 14, and nearly five and a half minutes since the last point of any kind for the Thundering Herd.

It only got worse for Marshall (25-11), who could not match the size and strength of their in-state big brother.

“We are just happy to keep playing,” West Virginia senior guard Jevon Carter said. “This is March. This is what we came to do. We don’t just want to go to the Sweet 16. We want to win it all.”

The Mountaineers held a 38-23 rebounding advantage and Marshall had nearly as many turnovers (18) as field goals (22).

Eight turnovers came from junior guard Jon Elmore, who finished with 15 points in the game after scoring 27  in the Thundering Herd’s first round upset-victory over Wichita State.

“They’re a heck of a team. They get after it. I think their physicality got to us a little bit,” Elmore said. “They got quick hands, handshake, ride you up the floor. They defend, trap, run all different kinds of guys at you. They’re versatile. Credit to them.”

Elmore met his match on the defensive end in Carter, who had four steals to go along with a game-high 28 points with five assists and four rebounds.

“(Carter’s) shattered our steals both in the season and career,” Huggins said. “He’s had a phenomenal career. I don’t know if he’ll break the assist record, but he will be close if he doesn’t break it.”

Marshall head coach Dan D’Antoni said that the team had a great run and has no reason to hang its head following the season-ending defeat.

“Proud of our kids. It was a great journey. They’ve lifted Marshall basketball further than its been, ever,” he said. “I think you will be surprised what we will do in one year. We want to keep it at a national level and this was a great start.”