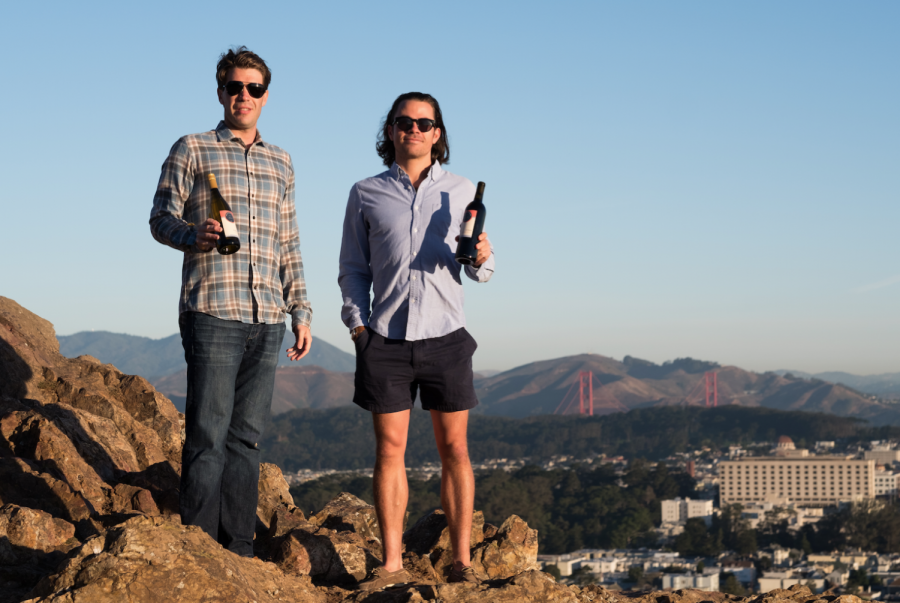 Founder and CEO Luc Bergevin (right), along with Chief Wine Officer and co-founder Martin Sheehan-Stross (left) started Foot of the Bed Wine Cellar in 2016 as a way to highlight Californian wines and share them with members.

Crumpled up blankets, discarded socks, teddy bears, sleeping puppies and dirty laundry are among the most common items that are found at the end of a bed. If the category came up on “Family Feud” for Luc Bergevin, CEO of Foot of the Bed Cellars, his response would be “a barrel of wine.”

After graduating from UCLA in 2011, Bergevin—whose last name translates to wine merchant or “Shepherd Wine”—began making homemade wine with fathers from his hometown of Los Altos, California. When he moved to San Francisco, he was given a barrel of wine, which he aged for a year at the foot of his bed.

“He made wine with (the dads) and aged it at the foot of his bed, literally, in his apartment in San Francisco,” Martin Sheehan-Stross, chief wine officer and co-founder for Foot of the Bed Cellars, said. “It’s very much truth in advertising and our logo kind of depicts that barrel at the foot of the bed.”

Bergevin later sought a business partner to start a wine business with, pairing up with sommelier Sheehan-Stross, an alumnus from San Diego State who graduated in 2009 with a degree in hospitality and tourism management. The two had attended the same high school a couple of years apart, and Sheehan-Stross was on Bergevin’s radar after being named one of the best young sommeliers by “Wine & Spirit” in 2015.

Foot of the Bed Cellars—a subscription-based wine club in San Francisco—was launched in 2016.

“(Bergevin) had wanted to start a wine company for a while, and he thought a lot about local wines and how we could meet producers and tell their stories,” Sheehan-Stross said.

Though the two had to learn about packing and storing wine while developing the concept for Foot of the Bed, Sheehan-Stross said that his education at SDSU helped him to successfully take care of customers once the business was open.

“One of the great things about the School of Hospitality and Tourism Management is that we start learning about service, what hospitality is and how you welcome someone in and take care of them,” Sheehan-Stross said. “Some of our members stick with us or switch to us from other wine clubs because customer service is paramount to us.”

Foot of the Bed Cellars now has more than 350 members in its wine club, the bulk of whom live in San Francisco, Marin County and Silicon Valley. Other members can be found throughout the state of California, and the age range varies from a young, early 20s demographic to members in their 50s and 60s.

“(Our members) find us and value us for different reasons,” Bergevin said. “I think the folks in the city love the variety and the community aspect to it, and I think folks a little bit older also love the variety, but they also love our value and that we can consistently deliver quality bottles of wine.”

Wines are chosen from wineries along the west coast, with many of the products coming from Californian vintners.

Once selected and purchased, Foot of the Bed bottles and labels the wine and members receive three bottles per month for $45. Each month, members can choose between a red varietal and a white varietal, mixing and matching bottles to meet their wine drinking preference.

“The goal of what we’re trying to do is to expose our members to the wide range of what’s being done in wine on the west coast,” Bergevin said. “Most people know they like wine, but they don’t know a ton beyond that. (We’re using) Martin’s huge base of knowledge as a kind of curated approach to a wine club.”

In addition to receiving their bottles of wine, members in the Bay Area are also invited to monthly parties in San Francisco and Silicon Valley, and quarterly events in Los Angeles.

Though the company is mainly dedicated to selling wine at an affordable, $15 per bottle price, Foot of the Bed Cellars is currently offering the Cool Gray 2016 Sonoma Coast Pinot Noir for $45 per bottle. This bottle is from winemaker Chris Pittinger of Gros Ventre Cellars in the Sierra Foothills, and is being offered to share a high quality pinot noir with customers, Sheehan-Stross said.

“We wanted to stay really committed to the $15 price point for a bottle of California wine, which is kind of hard to achieve since the land is so expensive in California,” Sheehan-Stross said. “(With Cool Gray), we wanted to do something a little more geared toward something that would be served in really high-end restaurants.”

For anyone interested in learning about wine or developing a palette to become a sommelier, Sheehan-Stross suggests starting by tasting and discussing different types of wine.

“Go drink the wine and then read about them,” Sheehan-Stross said. “Find other people who are into wine and drink with them, bounce ideas of them and travel as much as you can.”