Malik Pope was suspended for ‘amateurism’ last month. What’s that? 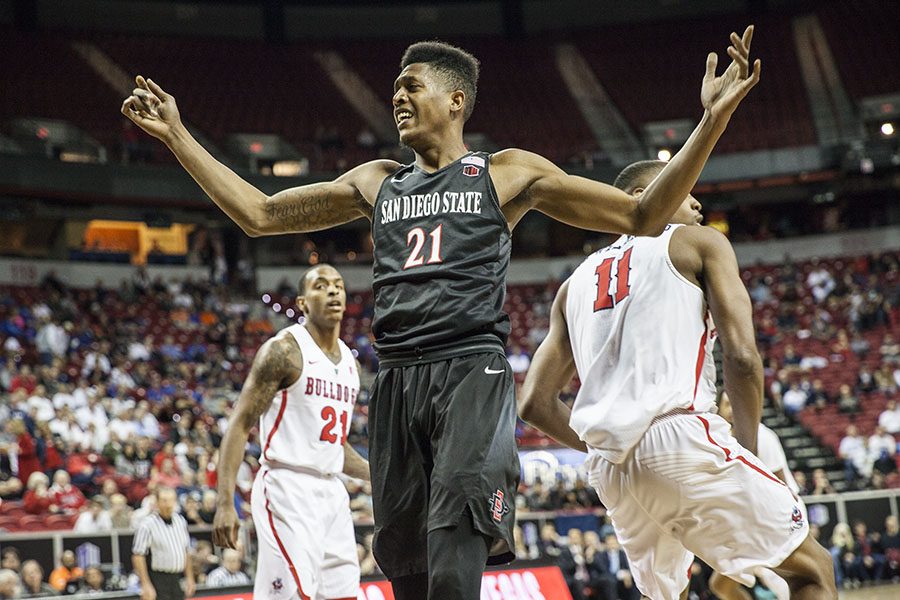 This kind of situation has become increasingly common as numerous college athletes have faced disciplinary action after receiving material rewards from outside groups. This is because this practice violates NCAA amateurism guidelines, a set of rules that are being called into question by some.

“The general rule for student athletes in regards to extra benefits is, once you’re a student athlete, you’re not allowed to receive anything that any member of the student body couldn’t receive,” said San Diego State Associate Athletic Director of Compliance Andy Humes.

The term “amateurism” refers to the practice of preventing athletes of non-professional status from receiving material rewards for their participation in a sport. According to SDSU’s Compliance Policies and Procedures Manual, even something like taking a free meal could potentially threaten a student athlete with a policy violation under NCAA amateurism guidelines. However, this issue most significantly takes the form of loans made out to families by what the NCAA calls “boosters.”

A booster is any “representative of athletics interests” — meaning anyone who makes financial contributions to university athletics. Boosters can give money to athletics programs, but can’t involve themselves with the recruitment process for athletes.

“I think one thing people maybe don’t realize about boosters is that, once you’re considered a booster, you’re a booster for life,” Humes said. “Technically, a dollar donation could make you a booster for life for that institution.”

Kinesiology junior Haig Yeghiayan said under-the-table bribes between boosters and athletes have occured for many years as a means of recruiting players, despite this process being a violation of NCAA amateurism rules that clearly outline that college athletes cannot be paid.

Yeghiayan said he also perceives this issue to be problematic from a socioeconomic perspective, as many talented players are from disadvantaged backgrounds.

“They get tuition, housing and stuff like that but a lot of them come from lower socioeconomic backgrounds and don’t have much money,” Yeghiayan said. “These people from poorer backgrounds take the money because they need it to survive.”

Timothy Myers, an administrator of an SDSU basketball fan page,  said he thinks it’s unfortunate that college athletes cannot be paid since many people forget these students are “college broke” just like many normal college students. He said having another job as a college athlete is forbidden during their sport’s on-season, creating a reality where athletes are forced to go to bed hungry.

While this may have been a more prevalent issue in previous years, Humes said recent changes in NCAA rules regarding how much money universities can give college athletes in grants have made this less common. Universities used to be capped at gifting college athletes an amount equivalent to full grant and aid but are now allowed to adopt what is called the cost of attendance stipend.

Humes said the amount of the cost of attendance stipend is determined by each institution’s financial aid figures of what the entire cost of attending the university is. This figure goes beyond considerations such as tuition and housing, covering outside costs for things such as food.

Even though the cost-of-living aspect of the debate over amateurism seemed to have had an easy fix, the prospect of eventually paying student athletes does not look like it will occur so simply. While most people cannot agree on how the NCAA should pursue such a change, Humes said that recent FBI involvement in the conversation could signal that change is on its way.

“I think there is a lot of review being done on (amateurism) in the Commission on College Basketball and a lot of conversation about that so I think there’s likely to be some recommendations and possible changes going forward,” Humes said.

For now, Myers said he fears the future of college sports is uncertain.

“It could end college athletics as we know it,” Myers said.