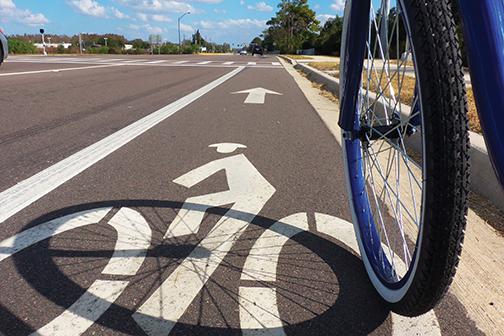 An inaugural “Bike to Campus Day” will take place at San Diego State on April 10 from 10 a.m. to 2 p.m. to promote commuting to campus via cycling.

“Our hope is really that not only will people get excited about the event — it’s going to be really cool and communal because it’s going to be fun to see so many people ride bikes on campus — but also people saying ‘hey, this is actually something that I can do,’” said Luis Bretts, first-year city planning graduate student.

Cyclists can get free snacks, water and gear during the event, as well as have their bikes tuned up on campus. Members of the campus community can also get a free Kryptonite bike lock if they register their bikes with SDSU Police Department during the event.

The planning-focused student organization, American Planning Association Student Group at SDSU, was started as a campus chapter in fall 2017. The idea of Bike to Campus Day was born as the organization started to form and its members sought a way to apply their city planning skills to the campus..

As the student association was looking at possible events to plan, the San Diego Association of Governments announced a grant program to promote cycling as part of the city’s climate action plan to reduce the number of motorized vehicles on the road.

“Right now, with cycling, we only have about 1.7 percent average of people in San Diego that commute by bike — (the San Diego Association of Gorvernments) is trying to change that,” said Bretts, who is a part of the association subcommittee that’s organizing the event.

SANDAG awarded the grant to the association, which is being used to help fund the event, Bretts said.

Bike to Campus Day has been organized through a partnership with the association, SDSU Parking and Transportation Services, Associated Students and Green Love. Cyclists can attend workshops to learn about where to park, how to safely lock up their bikes, learn how to change a flat tire, tune up a bike and perform safety checks.

The dockless bike company Ofo will also be involved during the event, Bretts said.

According to Parking and Transportation Services, Ofo will be available as a pilot program on campus starting April 10. Bikes will need to be left at bike racks, and the service will be free for the first month for anyone who signs up with their @sdsu.edu email account.

In addition to promoting cycling to campus, the organization is also studying the number of cyclists to campus before, during and after Bike to Campus Day. Students set up eight stations to count the commuters to campus who walk or use bikes, skateboards, scooters and other vehicles.

“We’re just trying to get a sense of where these activities are happening and trying to see if we see a large amount of people on wheels and, maybe even moving forward, on some of the proposed bike lanes,” said Paola Boylan, city planning first-year graduate student.

Members of the student planning association hope to encourage a healthy and environmentally-sustainable lifestyle, with intentions to make Bike to Campus Day an annual event, Bretts said.

“In some other cities, cycling is really a recreational, communal thing and a lot of people like going (places) by bike together,” Bretts said. “Besides the health benefits, besides the environmental benefits, there’s really a benefit to the community.”

Boylan added that Bike to Campus Day is a way to celebrate those who take alternative transportation methods to SDSU, while also encouraging others to join them.

“We know that our topography here in San Diego can be really challenging, and we also want to encourage people because it reduces greenhouse gas emissions, it gets people outdoors being active,” Boylan said. “These are all things that we want to celebrate, and that’s what this event is about.”