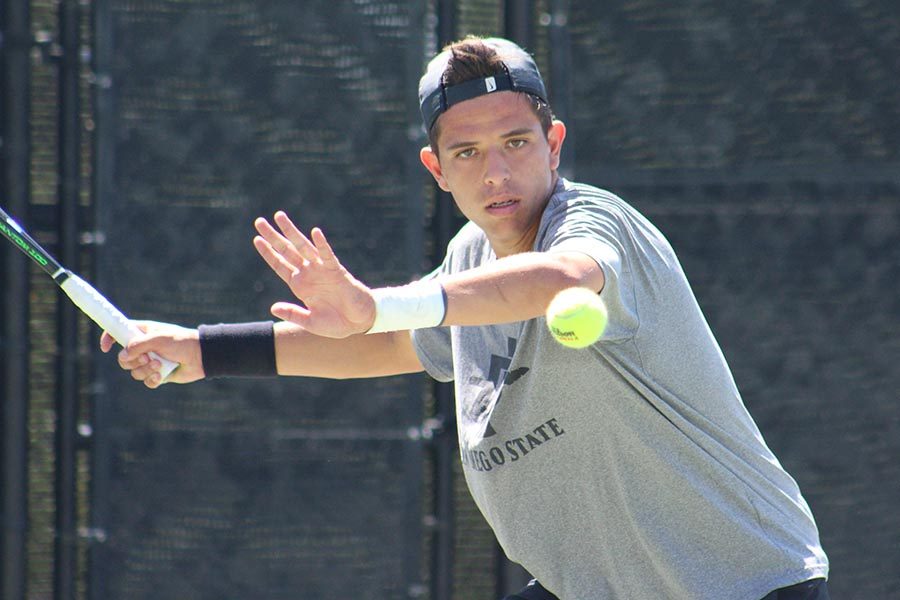 Sophomore Rafael Gonzalez Almazan prepares to swing his racket during the Aztecs 4-3 victory over Nevada at the Aztec Tennis Center on April 13.

In August of 2016, San Diego State men’s tennis player Rafael Gonzalez Almazan was faced with a decision that would forever change his life: leaving his hometown to pursue his passion for tennis.

Born and raised in Madrid, Spain, the question of whether Rafael would pursue tennis after high school lurked. Would he try to study in Spain, where universities did not combine athletics and studies, ultimately forcing Rafael to quit tennis, or would he venture elsewhere to pursue his passion?

The choice became clearer for Rafael once his best friend and mentor, Javier Pulgar, told him about San Diego State. Pulgar, also from Madrid, had a successful collegiate career playing tennis for the Aztecs as an all-conference competitor at the top of the lineup in 2009 and 2010.

“(Pulgar) experienced the college level here in America, and he told me it was going to be a great experience for me because of my personality and how much I could help the team,” Gonzalez Almazan said. “He also told me how good it was going to be to learn a new language and culture.”

On the other side, head coach Gene Carswell said that it was a huge advantage having Pulgar let SDSU know what kind of person and competitor Gonzalez Almazan was, since Pulgar had seen him play for years back home in Madrid.

“Having some first-hand knowledge about what (Gonzalez Almazan)  is all about and how he fights and competes, I think that goes a long way,” Carswell said. “As you spend more time with the kid, understanding what makes him tick, understanding what he wants to do with his future, it becomes more and more clear that this is a guy that’s going to be a good fit.”

“(Gonzalez Almazan) is a constant team player, always fighting for the guys. If it comes down to his match, he’s the one you want in there to decide it,” Carswell said. “He has plenty more to grow upon and get better with, which is exciting, because he is winning with solid play and still room for improvement.”

One thing that Gonzalez Almazan had to work on when he first came to SDSU was the learning curve of playing on a hard court surface.

“In Spain, it is super traditional to play on clay courts.  The ball goes slower there and the rallies are longer, the points are longer,” Gonzalez Almazan said. “Freshman year it was kind of rough to go from clay to hardcourt, where everything is faster, serves are faster, points are shorter.”

Gonzalez Almazan did not shy away from the challenge, but rather adapted his game.

“After being one year here and experiencing the college level, you have to make some changes, so that was my main goal this season–to try to be more aggressive,” Gonzalez Almazan said.

While collegiate tennis players boast a personal record aside from their team’s success, Gonzalez Almazan focused on his team’s 5-19 record when describing his emotions of how the season has gone.

Freshman teammate Ignacio Martinez said that while Gonzalez Almazan’s skill set is undeniable, it is the intangibles that makes him so special.

“He’s always the one pumping everyone up.  We are always waiting for his scream to get us going. I see him as one of the main leaders on the team,”  Martinez said.  “As a friend, he is a very good person and a very big heart.  He is very kind to everyone.”

Looking ahead to the Mountain West Conference Tournament, which will take place on the Aztecs home courts from April 26-28, the team will look for Gonzalez Almazan to continue being a tough spot in the lineup for opponents, and one of the major keys to a successful tournament run.