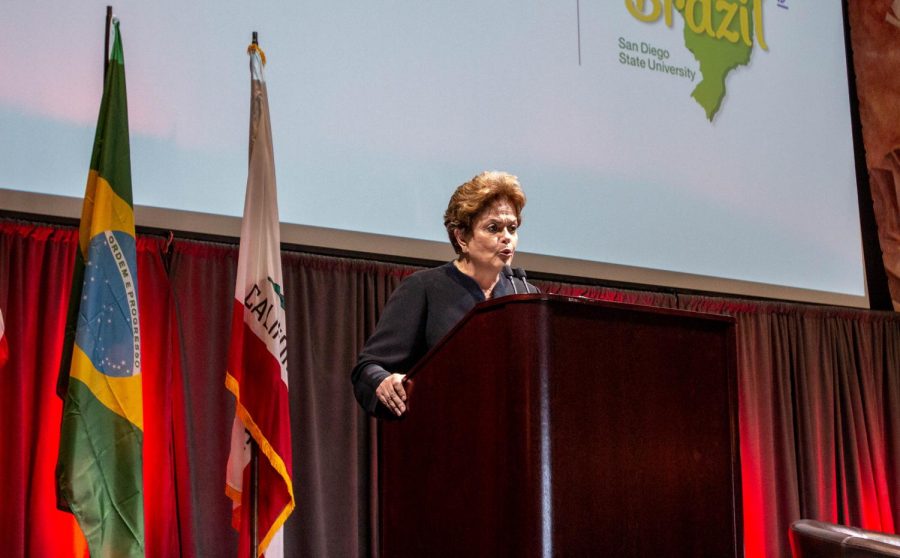 The impeached former president of Brazil spoke at San Diego State on Wednesday, April 18, about the controversy surrounding her removal and the contentious political climate in her country.

In the midst of Brazil’s complex and troubling political situation, the former president visited college campuses in Spain and California to talk about the events that led up to her impeachment while attempting to garner international support to free former Brazilian president and current presidential candidate Luiz Inacio Lula da Silva, who was sentenced to 12 years in prison on corruption charges last year.

Rousseff, who was elected as Brazil’s first female president in 2011, was accused of corruption when she broke Brazilian fiscal laws by moving funds between government budgets.

Impeachment proceedings soon followed, beginning on Dec. 2, 2015 and ended Aug. 31, 2016, when she was officially removed from office and replaced by vice president Michel Temer, leader of the opposing political party. Rousseff maintains her innocence and cites ulterior motives for her ouster.

“There is no basis for my impeachment,” she said during her speech.

Rousseff claimed that gender roles, misogyny and corruption were some of the reasons why she was removed from office.

In a series of tweets posted on Nov. 4, 2017, she wrote: “I was considered ‘obsessive-compulsive’ with work,’ while men are regarded as dynamic and hard-workers. Dilma is a harsh woman, and men are firm; Dilma is emotionally unstable, men are sensible.”

Eduardo Cunha, the politician who organized Rousseff’s impeachment, was sentenced to 15 years in prison just a few months after her impeachment proceedings began for his own corruption scandal.

There was a clear divide in the audience during Rousseff’s speech, whose supporters cheered her on when she was interrupted several times by protesters.

Brazilian-born San Diego resident Luiza Marques was one of the protesters present at the event.

“Dilma has an agenda,” Marques said. “They talk about the (political) party for the workers, but that’s not what they do. They steal from Brazil.”

Rousseff responded back to the protestors through her speech, saying that her administration was the first to address the corruption within the government.

The audience members also served as an example to Rousseff’s explanation of how polarized politics have become in Brazil.

She attributed this phenomenon to the societal issues some Brazilians face, adding that many of the country’s government problems are rooted in its history with slavery and its current conditions with poverty and racism.

Kim Capille, a Brazilian student studying marketing at SDSU and a supporter of Rousseff, had a more positive outlook on the current political situation.

“I would like to believe that we’re just in a place that’s messy and that it will get better,” Capille said.

Brazilians are set to vote in presidential elections in October 2018. Lula is currently leading in the polls despite his incarceration. It is yet unclear whether if he will still be eligible to run for office.