Baseball capitalizes on miscue in 3-2 victory over Fresno State 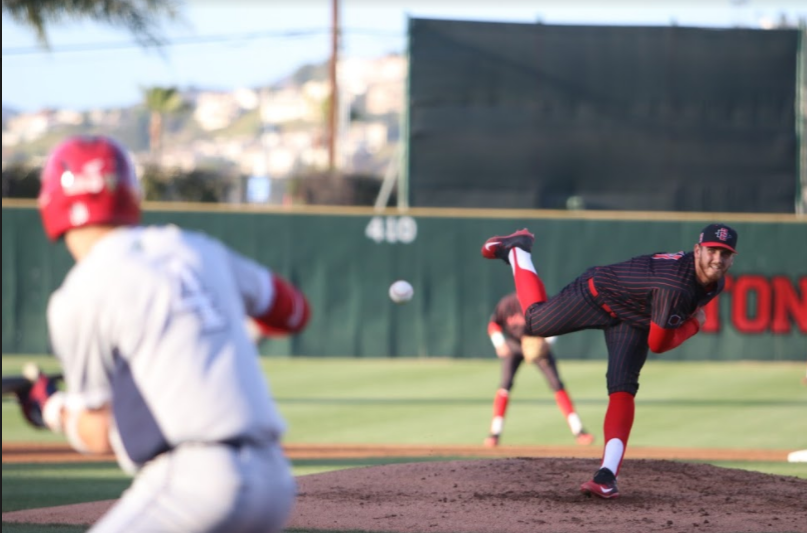 Junior pitcher Harrison Pyatt throws a pitch during the Aztecs 3-2 win over Fresno State on April 20 at Tony Gwynn Stadium.

The teams were tied at 98-98 all time in the series coming in, and split eight games in matchups last season. The Aztecs also defeated the Bulldogs twice last year in the Mountain West Championship Tournament, en route to their fourth MW title in five years.

In this one, strong pitching by SDSU, along with an error by Fresno, helped give the Aztecs the victory in the first game of the weekend series.

The turning point in the game came in the bottom of the seventh inning, after what seemed to be a routine ground out turned into a runner on base for the Aztecs. Bulldogs first baseman Nick Warren forgot to step on the base to complete the out, resulting in runners on first and third for SDSU.

SDSU capitalized on the opportunity after junior catch Dean Nevarez singled to left, notching his second RBI of the night and tying the game at 2-2. Sophomore center fielder Julian Escobedo also tallied an RBI in the inning, hitting a single which gave the Aztecs a 3-2 advantage heading into the top of the eighth inning.

The Bulldogs were facing the same deficit going into the ninth inning, before freshman Casey Schmitt managed to close out the game for SDSU to seal the victory.

The Aztecs started junior pitcher Harrison Pyatt, who came into the game with a 2-2 record and a 4.30 ERA, while Fresno State started sophomore pitcher Ryan Jensen, who had a 2-3 record and a 4.43 ERA.

Through the fifth inning the game was scoreless as the two pitchers combined to give up eight hits and no runs. Pyatt amounted six strikeouts for the Aztecs through five innings, compared to Jensen’s two for the Bulldogs.

Pyatt ran into trouble in the top of the fifth, loading the bases with only one out after allowing a single and two walks. He managed to escape the inning unscathed after back to back strike outs.

Nevarez opened up the scoring for the Aztecs in the bottom of the sixth inning, after his home run to left field  gave the team their first lead of the game at 1-0.

“I was just trying to stay short on the ball and put a good swing on it and not do too much,” Nevarez said.

Fresno answered in the top of the seventh inning with a score of their own, tying the game at 1-1 after an errant throw to first by SDSU freshman third baseman Casey Schmitt. Junior left fielder Nolan Dempsey then hit a single into left to drive another run home and give the Bulldogs a 2-1 advantage.

A double play and a pitching change would get SDSU out of the inning.

An error by senior shortstop David Hensley gave the Bulldogs their first real scoring opportunity of the game in the top of the sixth with runners on second and third with two outs, but Erickson would get Fresno catcher Zach Presno to fly out to center to get out of the inning.

The Aztecs will play game two of the series against the Bulldogs tomorrow at 6 p.m. at Tony Gwynn Stadium.