REVIEW: ‘Anna in the Tropics’ heats up theater department 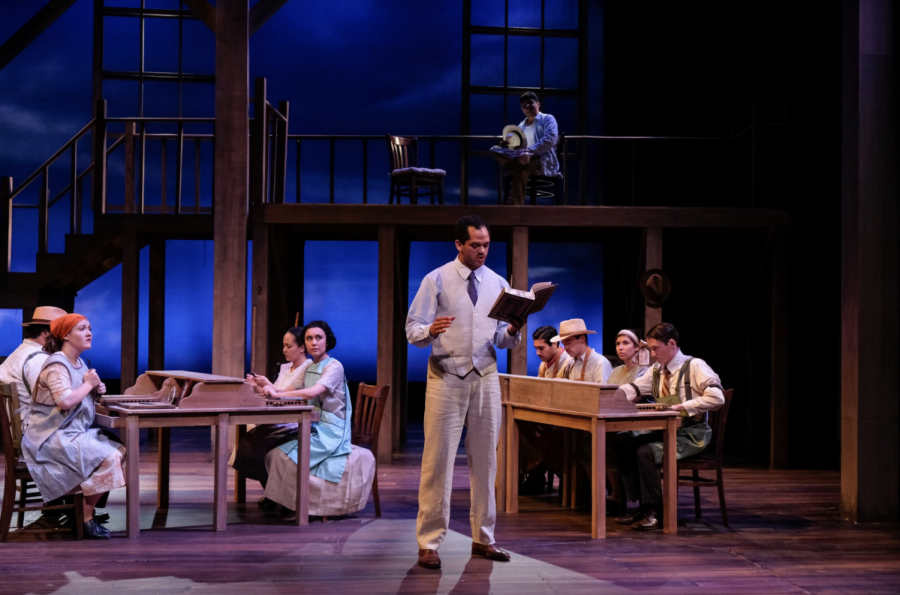 Cast of "Anna in the Tropics" take the stage during their April 26-29 performance in the Don Powell Theatre.

San Diego State’s theatre department shatters the ceiling with the performance of “Anna in the Tropics” directed by CJ Keith.

The production features a nuclear cuban family who owns a cigar factory in 1920s Tampa, Florida. The lives of the factory workers suddenly heat up when the new lector, Juan Julian, comes to town and stirs their feelings, all because of a book called “Anna Karenina.”

“Anna in the Tropics” is a roller coaster of emotions with twists of love and tragedy, and a million laughs in between. Computer engineer senior Madeleine Rasche saw the performance and enjoyed it.

“I absolutely loved the mother in the play, she was so funny and Alexis Park played the part flawlessly,” she said.

Theatre performance senior Alexis Park described her character, Ophelia — the mother — as the rock of the family.

“It was really challenging to take on the roll of a woman in her 50’s as a young 20-something,” Park said.

“With so many things happening I wasn’t sure what the overall message was because my emotions were all over the place,” Rasche said.

Theatre performance junior Matt Tornero was plagued with the name “bad guy” for his character in the performance. Although his character was the least liked and did some awful things, Tornero studied further and dug deeper into the true understanding of his part in “Anna in the Tropics.”

“I feel like my character CheChe felt out of place from the family because he was only half Cuban. Because of that he shouted louder and abused his power to try and make others feel the pain he was feeling. I feel like I can relate to his struggle in that sense on a personal level because I am of Latino descent,” he said.

For Alexis Vierra, a theatre performance freshman playing Marela in “Anna in the Tropics,” her role was a huge self victory.

“I have been acting since I was four years old but was always in the ensemble, so getting a lead in ‘Anna in the Tropics’ was a huge deal for me. I felt like I had to prove myself,” she said.

When she first started reading the script, she felt as if her character, Marela, was extremely naive and it was hard to connect. However, after studying Marela deeper she discovered that she is actually extremely perceptive, which made her acting so much more focused.

“Anna in the Tropics” will be held at 7:30 p.m. from April 26-29 in the Don Powell Theatre. Tickets are $17 for students and seniors, and $20 general admission. Children under the age of 6 are not permitted in the theatre.