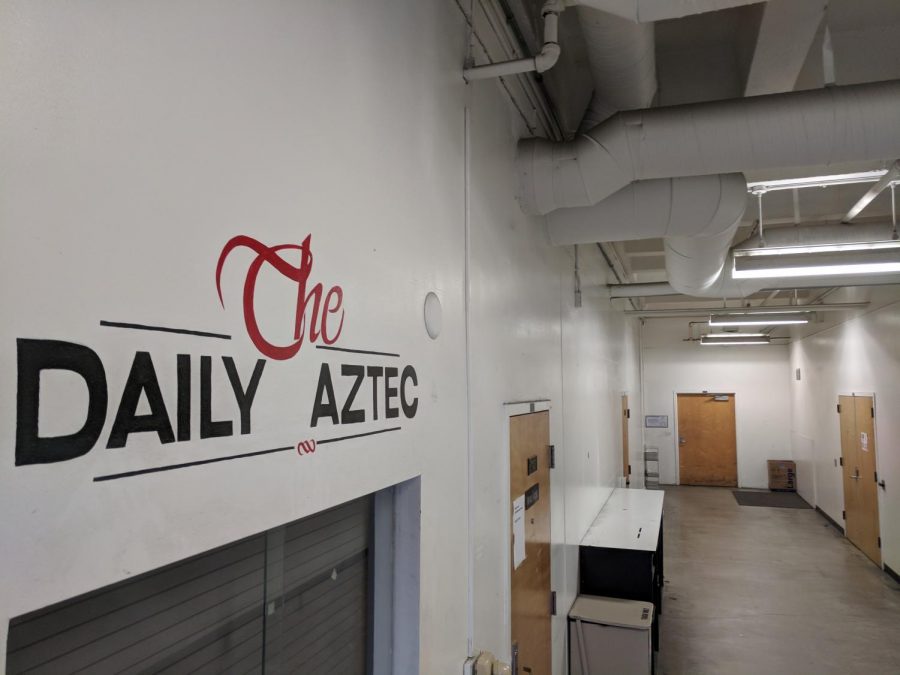 The Daily Aztec newsroom in the basement of the Education and Business Administration building.

The issue: Student media is in dire straits. Declining revenue is forcing university newsrooms across the country to cut coverage.

Our take: Support student media any way you can — donate, advertise with us or just share our content.  We need all the help we can get.

The decline in local newsrooms at daily newspapers has been ongoing since the mid-2000s. There are fewer journalists covering local governments, schools and courts than there were 20 years ago.

Student newsrooms have been affected as well. Declining advertising revenue and the decimation of classified advertising has left student publications reeling. Publications that were once profitable and independent are slashing budgets, staff and — in many cases — turning to their universities to bail them out.

The shrinking viability of student newsrooms has a ripple effect. Not only are there fewer reporters to cover student governments, organizations and university administrations, but, as a result, there are fewer trained journalists entering the professional ranks.

For this reason, student newspapers across the U.S. are participating in the #SaveStudentNewsrooms day of action. The Daily Aztec is not alone in facing these challenges, but, in coordination with student media organizations coast-to-coast, we are looking to raise awareness about the value of the work we do and how it can be supported.

The Daily Aztec has had its own challenges. Ten years ago, the paper printed four days per week, and paid not only its editors, but its writers and photographers as well.

The last several years has seen that output decline. The paper went from four times a week, to twice and now once a week. While we update and publish stories daily online, the loss of a daily print product hurt in both the training of writers and editors and in the amount of advertising it could sell.

By 2012, the newspaper was operating in the red.

A patchwork arrangement was made with Associated Students to save the paper. Every semester, the editor in chief of the newspaper goes before the A.S. Finance Committee and asks for a subsidy. That subsidy — which is less than half our operating budget — is not guaranteed year-to-year, but has allowed the paper to continue publishing despite the decline of advertising revenue.

This arrangement is far from ideal. Although the paper is editorially independent from A.S., the subsidy does leave us open to criticism, especially when it comes to how we cover student government, A.S. and the administration.

One look at the adversarial investigative reporting done by The Daily Aztec over the years renders those critiques moot. It was The Daily Aztec that investigated the expulsion of the Phi Kappa Theta fraternity and the university’s coordination with its national chapter to cover up the details of its numerous infractions.

It was also The Daily Aztec that first reported on the state’s findings of racism and discrimination in Ozzie Monge’s classroom, a story that was picked up by national and international news outlets.

The reporting done by student news organizations is valuable. No one else — not local TV, newspapers or magazines — are minding the store in the way college journalists are. As we lose them, we lose the first-line watchdogs for institutions that manage multi-billion dollar budgets, and whose decisions affect the lives of tens of thousands.

The Daily Aztec isn’t dying, but it is limping. Most of our cameras are five to six generations old. Many of our newsroom computers are almost ten years old. Most of our office chairs are broken and our carpet is stained from a decade of late-night coffee spills. We cannot afford to send our staff to valuable journalism conferences — opportunities to hone skills and network with other student journalists go unrealized.

The students — and we are all students — at The Daily Aztec often work into the small hours of the morning reporting, editing and designing the newspaper and website. This work is a service, and those who do it consider it a calling. We are resilient, and accustomed to doing more with less, but there are only so many cuts we can make before our ability to do this job is critically compromised.

Anyone can donate to The Daily Aztec via our website here and the Campaign for SDSU donation page. However, what is needed is a long-term solution.

Our arrangement with A.S. is year-to-year, and everyone from the university president to the editor in chief knows the arrangement cannot continue in perpetuity. Minimum wage will rise to $15 per hour, and we are bracing for further cuts.

If you are a current or former student at SDSU, and want to show your financial support, please consider donating. If you are not able to donate, consider sharing one of our stories on social media using the hashtag #SaveStudentNewsrooms. And, if you are a business owner or event planner, consider advertising with us. We print 5,000 copies of the newspaper weekly, 750 of which our staff personally hand-out on Thursdays at the farmers market.

We will keep doing the work. It is up to this community to ask itself how much that work is worth, and if it’s worth losing for good.