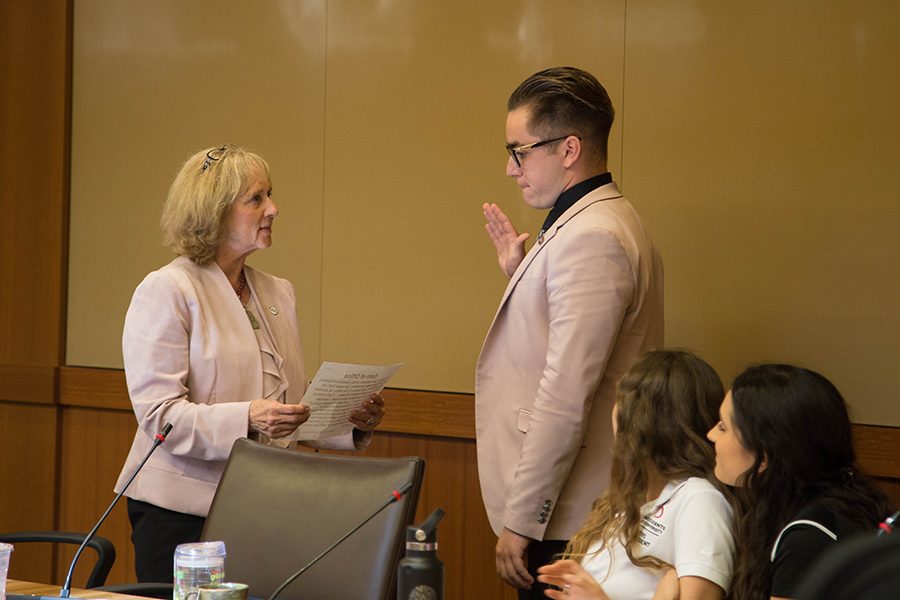 Incoming Associated Students leaders for the 2018-19 academic year were sworn in at the A.S. council chambers April 25.

He said that at his freshman convocation in 2014, he told his parents that he would one day address the crowds of students and their families at the annual event A.S. president.

In addition to Thomas, members of the A.S.Board of Directors, Campus Life Council, University Council and Judicial Affairs Council were all sworn in.

She said that some of the highlights of the year were watching A.S. work on the early registration timeline, Aztecs Rock Hunger and advocate for free speech around the discussion of the aztec moniker.

“I know that Chris is prepared,” Ebiriekwe said. “I have put him in positions where I was like ‘this is what you’re going to be doing as AS president’ and he was able to show great leadership qualities.”

Ebiriekwe said Thomas’ love and compassion for everyone is going to help bring A.S. and the university together as a whole.

For next year, Thomas said his vision for A.S. is to have a “year of the heart” — which he said means he wants student leaders to begin every conversation with compassion.

Board of Directors member Latrel Powell said he’s excited about this plan.

Powell said that he knows that A.S. is full of students with many different backgrounds and life experiences, and he believes that having them work with “love in their hearts” will help them come to better agreements on ideas.

Thomas said he wants to spend his year in office reaching as many of the 35,000 students at SDSU.

He said he wants the student body to know what A.S. is and what it can do for its student population and community.

Powell agreed with Thomas and said that although 35,000 is a large number, he feels that students aren’t being represented enough and he’d like to find a way to fix this.