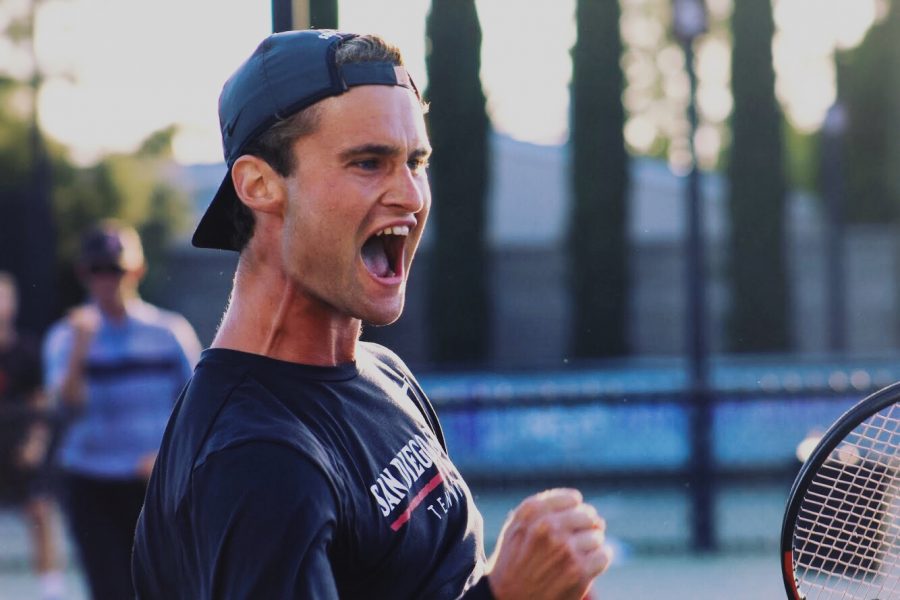 Junior Sander Gjoels-Andersen pumps his fist after clinching the doubles point with junior partner Rafael Gonzalez Almazan during the Aztecs 4-2 victory over New Mexico on April 26 at Aztec Tennis Center.

Juniors Sander Gjoels-Andersen and Rafael Gonzalez Almazan clinched the doubles point for SDSU with a 7-5 victory on the first court.

“Everyone showed up for doubles and the rest of the match, and everybody was on the same page,” junior Raul De La Torre said.

De La Torre would later clinch the overall victory for the Aztecs with his 6-4, 5-7, 6-2, singles win over senior Sean Baklini.

In singles play, the intensity was heightened as every match went to the full three sets.

New Mexico was able to tie the match at one a piece, after freshman Ignacio Martinez fell victim to senior Bart Van Leijsen’s two-set comeback win 1-6, 6-1, 6-2.

However, the Aztecs regained the lead thanks to a Gonzalez Almazan win of 6-2, 2-6, 6-4 over freshman Stepan Holis.

Aztecs sophomore Arnaud Restifo  lost his first set 5-7 to junior Ricky Hernandez Tong, an opponent that Restifo lost to the last time the Aztecs played New Mexico on the road on April 6.

Then, the revenge factor kicked in.

Restifo willed himself to victory, winning the next two sets and completing the comeback 5-7, 6-3, 6-2, to give the Aztecs their third point.

“I knew what to expect, and I knew I had to play well. I dropped the first set, but I missed so many occasions,” Restifo said. “Coach told me to refocus myself and play the next sets as if it was zero to zero, and to put that first set behind me.”

Head coach Gene Carswell praised the way Restifo stepped up for the team.

“Couldn’t say enough about (Restifo) today,” Carswell said. “He really did a great job of playing a complete match. I couldn’t be more proud of that kid.”

From there, it was left up to De La Torre or Gjoels Andersen to get the fourth and final point.  De La Torre finished his match first, clinching the first-round win for the Aztecs.

“I was up 5-4 in the second, 30-love, and somehow I managed to get broken, and I wanted to break my racket. But I managed my cool, and finished the match and we won it.  I am so thankful to have the opportunity to play here,” De La Torre said.

Tomorrow, the Aztecs look to win their semifinal match and make it to the championship round.