The Daily Aztec • May 2, 2018 • http://thedailyaztec.com/89737/artsandculture/cell-phone-inventor-makes-a-call-on-campus/ 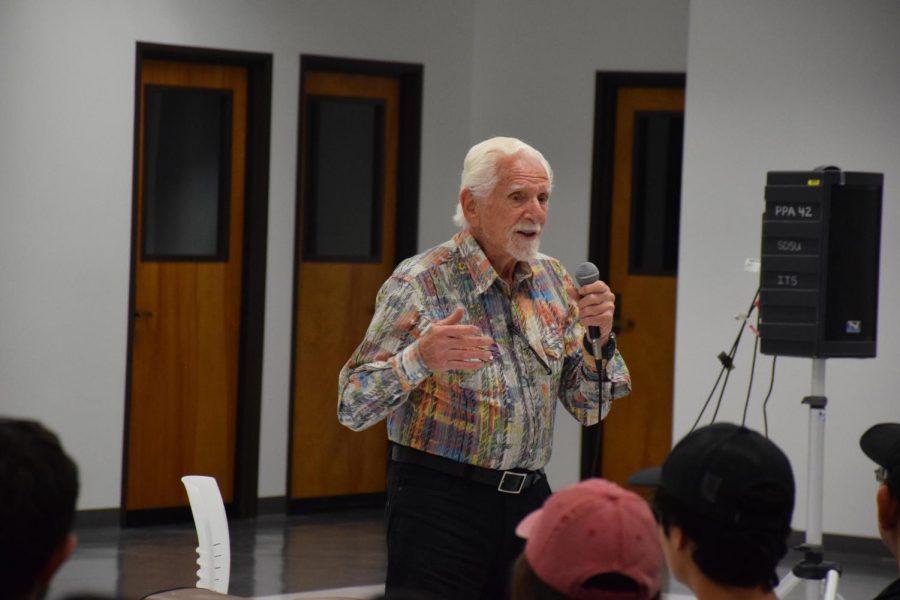 When Martin Cooper made his first cellphone call on April 3, 1973, the phone that he made the call on — the DynaTAC 8000x that he had invented — was much different than modern day smartphone technology.

Weighing two and a half pounds and only staying charged for about 20 minutes on average, Cooper and his team at Motorola had created a fully wireless phone that could be used outside.

During a speaking engagement at San Diego State’s Digital Humanities Center on April 17, Cooper discussed his personal career and the history behind mobile device technology.

In the 1960s, AT&T was advocating for the Federal Communications Commission to approve car telephones, not believing that completely mobile phones would be a necessary or viable alternative to landlines.

“What (AT&T) decided was what we wanted were car telephones,” Cooper said. “Could you imagine? We’d been trapped in our homes and offices with this wire, and they were going to solve our problem by trapping us in our cars.”

Describing himself as a former engineer and entrepreneur, he now identifies more as a “historical futurist.” At the time of the mobile phone’s creation, he said he hadn’t predicted that cellphones would become the tiny supercomputers that they are today.

“We had been doing texting for years — we had pagers that you could text on,” Cooper said. “It’s hard for you to imagine, all you young people, but in 1973, the digital camera had not been invented. The internet was still a young, private service used only for government purposes, there were no personal computers at all, there were no large-scale integrated circuits.”

“It’s hard to imagine how anyone existed without all those things, so it was a little difficult for us to imagine that all of those things and more would be squeezed into a little (phone).”

Some of Cooper’s current predictions for the future of mobile devices include optimum phones that are attached to the user’s ear, continued resources for people living in impoverished states and devices attached to various body parts that can detect health issues before they occur.

“Every disease is actionably preventable,” Cooper said. “If we could have a device on your body – or maybe a few devices, and maybe some of them implanted — that anticipates these diseases and catch them before they become diseases, then maybe we could eliminate disease completely.”

In the 45 years since its invention, the cellphone has become one of the most ubiquitous personal items in modern society.

Pew Research Center reported in February that 95 percent of American adults own cell phones, an increase from 65 percent in 2004. Researchers also found that Americans are now more likely to own a smartphone, with 77 percent of adults owning smartphones compared to 35 percent when the last smartphone survey was taken in 2011.

Librarian Markel Tumlin has worked at SDSU for the last 20 years. During that time, he said he has not only witnessed the increased use and ownership of cellphones, but he has also seen an increase in the library’s use of cellular devices as part of its overall system.

“When I started working here, I don’t remember too many people having a cellphone,” Tumlin said. “A lot of the the technologies that we work with at the library have adapted to the fact that people have handheld technologies. A lot of the apps that people can use to do various things did not exist back then, and I see the way that educational technology has adapted to the cellphone all the time.”

Referring to the cellphone as a “life-changing technology,” Tumlin said that he has seen cell phone etiquette evolve over the years.

“I think it has improved — when cellphones first hit, it was not uncommon for students to walk up to the reference desk talking on the phone and trying to hold two conversations,” Tumlin said. “That never happens anymore, so I think there was a learning curve eventually, but I do think it has gotten a lot better.”

After finding out that Cooper was now living in nearby Del Mar, School of Journalism and Media Studies professor Noah Arceneaux wanted to meet him and give students at SDSU the opportunity to meet him as well. Compared to Cooper, Arceneaux said he has a more judgemental view and that others should be more cautious with the technology forms that they adopt.

After seeing a video of Cooper speaking about his first cellphone, Matthew Dyman, a public administration graduate student, was inspired to attend his guest lecture at SDSU.

“I liked his optimism on the future for cell phone use and the ways it’s improving lives around the world,” Dyman said. “I think it’s interesting how he was saying that the negative, psychological shifts that we’re seeing in society are going to be corrected in the future like all of the people stuck on their phones and everything is going to be changing in the next generation.”