The Daily Aztec • May 2, 2018 • http://thedailyaztec.com/89740/artsandculture/new-memoir-details-personal-story-of-the-metoo-movement-in-hollywood/ 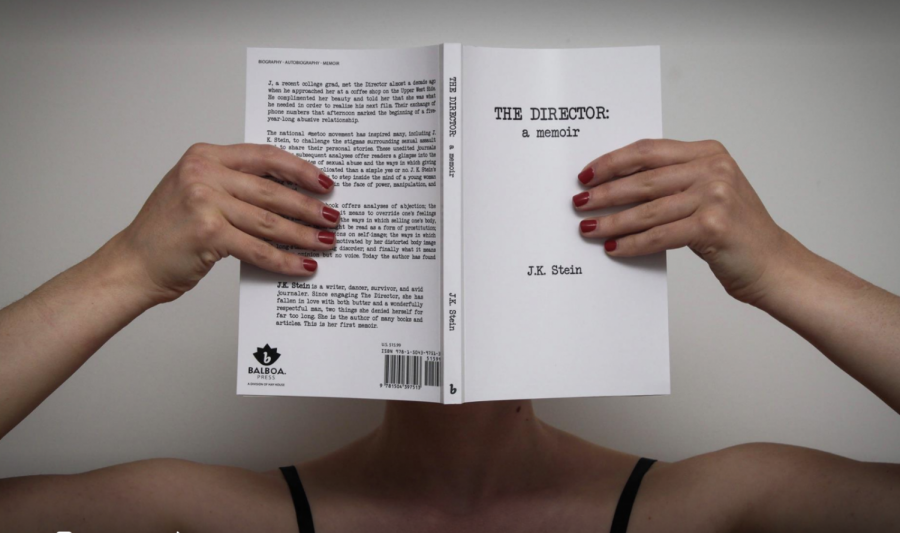 Since October 2017, a hashtag has taken over social media as one of the most viral movements against sexual assault to ever take place. It is comprised of two words.

Women began posting #MeToo to break the stigma around sexual assault, and many were astonished by the amount of friends, coworkers and peers to share stories of abuse, especially by powerful figures.

Author J.K. Stein is part of the #MeToo movement, and after witnessing the magnitude of women that had been abused by her very own assailant, she felt compelled to share her story.

“It felt like some sort of sisterhood even though I hadn’t met any of the women,” Stein said.

Stein documents her raw accounts of abuse and manipulation throughout “The Director: A Memoir.” The book is comprised entirely of unedited journal entries that she kept during her five-year-long relationship with an influential Hollywood director.

His real name is never stated throughout the novel.

Stein decided to revisit this complicated time in her life by rereading and transcribing the journals. She knew that she needed to in order to create this memoir.

Stein was sought out by The Director while working at a coffee shop in New York City.  He approached the recent college grad, showered her with compliments and expressed his need for her to star in his new movie.

From that point forward, Stein and The Director would meet upon his false promises of prepping for the film that would never happen.

During the meetings Stein found herself in uncomfortable situations. The Director barely disclosed details of the film and pressured her to engage in sexual acts and performances.

Stein found herself in a terrifying high stakes position with a man of power, and an incredible job opportunity that she didn’t want to risk losing.

“‘Carpe diem,’ I thought. What have I got to lose other than my integrity?” a journal entry reads in the book.

During this time, Stein’s journal was her only confidant. She was alone in battling her own demons, including an eating disorder, on top of The Director’s mind-games.

“I didn’t think that I deserved better,” Stein said. “I felt like I really couldn’t say no.”

Stein describes the process of transcribing the journals as therapeutic, although painful.

“There were so many things I had blocked out of my mind,” she said. “Once I got the courage to type up these experiences, I was able to take the next step to seek therapy.”

Then, Stein could begin to heal.

She was determined to get her story out while people were still talking about the #MeToo movement. Stein began the process of writing her memoir in November 2017 and submitted the final manuscript to her publisher in the first week of January.

“Knowing that there were many, many accusations and pending court orders against (The Director),” Stein said, “I wanted to get this out before any decisions were made.”

She never intended to omit The Director’s real name, however no publisher would accept the memoir otherwise.

“I would have loved to have named him,” Stein said. “It was not about protecting my identity. I secretly want this guy to read these journals. I have not kept his identity a secret on social media, and I think that after reading the first chapter most people know (who he is).”

Stein’s memoir is not an easy read. It’s difficult to stomach the fact that The Director’s grotesque and devious actions are that of an actual person.

“To think that he had 399 other women that he played with…it’s mind-blowing that anyone could be that sick,” she said.

Coincidentally, Stein’s memoir was released around the time that the Los Angeles District Attorney’s Office dropped the allegations against The Director as they fell outside of the statute of limitations.

She now has no qualms about revealing his identity.

“The connection is out there, and if you want to find it, you can,” Stein said.

One of the most important takeaways from “The Director: a Memoir,” is that consent is complicated.

“If you are in a court scenario, the question is always, ‘Did you consent?’ and there’s not always an easy way to answer that,” Stein said. “I think these journals demonstrate how complicated it is to put that (answer) in a nice package for you.”

Stein takes responsibility for the fact that she didn’t leave the meetings, but her memoir documents the reasons why.

“Is there such a thing as ‘yes and no’ when the stakes are too high?” Stein said. “When there is such a big disparity in power and the abuser is manipulative and successful, is it fair to make consent a part of that?”

If Stein could go back in time and give advice to 22-year-old self, she would advise that she continue to ask herself if she deserves to feel comfortable. She would tell her to listen and value herself.