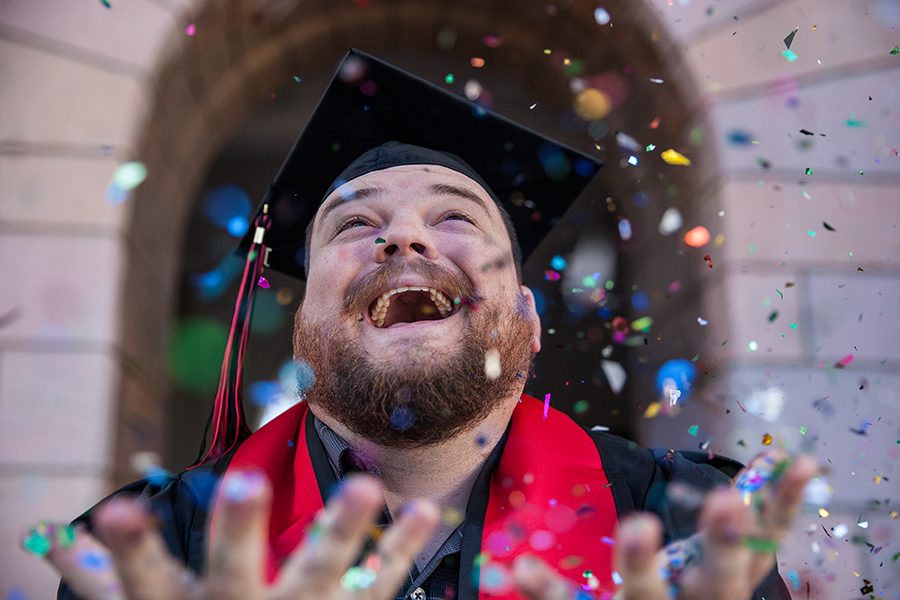 It’s difficult to say what The Daily Aztec and the people I’ve worked with here have meant to my two years at San Diego State without drifting into the dreaded waters of hyperbolic sanctimony. Doing this work changed everything about me, how I relate to people and how I perceive the world around me.

When I enrolled at Southwestern College in Chula Vista after 10 years in the U.S. Navy, I didn’t exactly know who I was or wanted to be anymore. The military indoctrinates young people in such a way it can be difficult to negotiate civilian society. Reintegration remains a challenge for returning Iraq and Afghanistan veterans.

I’d like to thank San Diego CityBeat and then-Editor Ron Donoho for giving me my first paid writing gig, and current Editor Seth Combs for being so patient as I struggled with multiple deadlines across various publications.

It was joining the newsroom at the Southwestern College Sun in 2015 that showed me where I fit in. At both SWC and SDSU, my newsroom colleagues were the most open and easy friends I have ever made, and never gave me too much of a hard time about our differences in age. It can be alienating being a non-traditional student and the people I’ve met did more for me than they can ever know.

Luz Aramburo, my first editor at The Sun, taught me how to wash my opinions out of my stories for good, and for that I will forever be grateful.

Professor Max Branscomb, my first journalism professor, gave me the green light to be a royal pain-in-the-ass to college administrators — a vital skill I hope everyone who follows me picks up.

Kelly Smiley, The Daily Aztec’s photo editor for two years, has put up with a lot from me, but she is one of the most talented and dedicated photographers I’ve had the fortune to work with. She has come through for this paper more times than I can count. Kelly, there would be no Daily Aztec without you, and I appreciate all the sacrifices you made this year to make this paper special.

Will Fritz, who I leaned on harder than most, and who always delivered, is as close to the real thing as journalism gets, and this campus is better off having him here. Be fearless next year, and remember, we’re not here to tell the “good” stories — if we were, we’d have a sustainable budget.

And, of course, Alex Piscatelli, who got me through all those anxious “what’s next” conversations when trying to imagine life after graduation, and who has a bright future as a stand-up comedian and reality TV star. Ask her about her psychic powers, it’s hilarious!

I have to thank my wife Kumiko and son Miles for being so patient as I spent so many late nights buried under newsroom deadlines. And thank you to Koji and Itsuko and for your encouragement and support four years ago when I took this crazy now-or-never leap.

Thank you to everyone who picks up, clicks on, swipes, scrolls and comments on everything published in The Daily Aztec. The students who produce this work do so out of love, and a desire to serve something greater than themselves. Student journalists, in my experience, are the most thoughtful, engaged and invested of all campus citizens.

That’s why it’s important this community understands what we’re up against.

Last week, we participated in the national #SaveStudentNewsrooms campaign. Student media nationwide is threatened by tightening budgets and overzealous administrators uncomfortable with the sometimes critical, independent adversarial journalism being practiced.

There are forces on this campus who would love nothing more than to see The Daily Aztec function as just another public relations vehicle for the SDSU brand. They want all media inquiries funneled through media relations, and too many members of the faculty and staff are all too happy to deflect reporters’ questions to official spokespersons.

Every administrator, provost, dean, professor and maintenance worker on this campus is a public employee accountable to the taxpayers and students they serve.

Daily Aztec reporters have the same first amendment rights as reporters from the Union-Tribune or New York Times, and they deserve acknowledgment and response. I encourage every student reporter who comes after me to never forget this. Students here are customers of CSU, and, when they have questions, they deserve answers. They deserve accountability from those in ivory towers with six-figure salaries. There’s an age-old adage in journalism: “Afflict the comfortable, and comfort the afflicted.” Do not forget that.