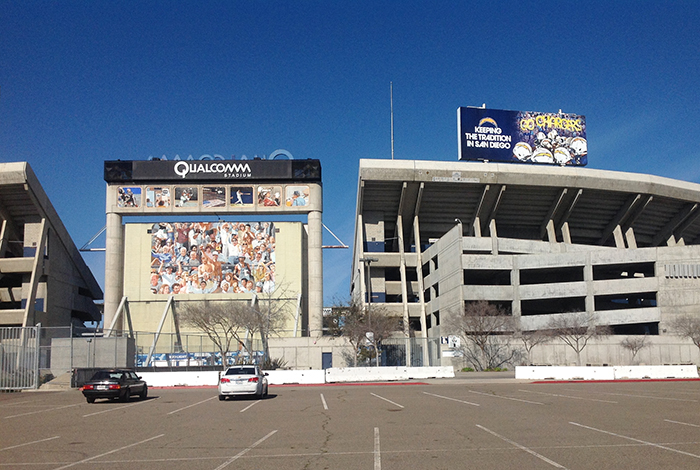 The stadium formerly known as Qualcomm in May 2017.

Following a long summer of legal drama surrounding the two ballot measures with dueling plans to redevelop the Mission Valley stadium site, an appellate court ruling on Aug. 6 affirmed the SoccerCity and SDSU West initiatives’ spots on the November ballot.

City Attorney Mara Elliott made the decision late last month to appeal a prior ruling that had affirmed the initiatives’ legality.

While the courts have made it clear they like to be liberal in their assessments of citizens’ initiatives in order to protect the democratic process, Elliott challenged that the goals these initiatives in particular were questionable enough to remove them from the ballot.

“The Soccer City and SDSU West initiatives essentially force the lease or sale of City assets
on terms set by the proponents,” Elliott said in a statement. “By filing writs with the Fourth District Court of Appeal, the City seeks clarity on whether this unprecedented use of the initiative process is legal.”

In the appellate court’s Aug. 6 decision to deny the petition, the same concern for protecting the democratic process became the grounds for upholding the prior ruling that had allowed the competing initiatives their spots on the ballot.

“Under these circumstances, and given the substantial public interest involved, we decline to eliminate the right of the public to express its views on the competing initiatives,” the ruling states.

The ruling continued to cite a 2006 case titled Costa v. Superior Court that had previously protected the right of citizens to use the initiative process to “propose statutory or constitutional changes.”

While a thorough examination of the initiatives may have been favorable, the ruling identified that pursuing such would make the initiatives unable to meet the deadline to print the ballots, thus compromising the right of the citizens to vote on the initiatives.

However, a statement from the City Attorney’s Office said the decision keep the competing initiatives on the ballot could have lasting implications.

“We did everything we could to lift the cloud of legal uncertainty over these measures so San Diego voters could participate with confidence in a decision that will impact us for generations,” the statement read.

Meanwhile, the SDSU West initiative has identified this ruling as a major win.

“With no further legal barriers in our path and overwhelming support from San Diegans, SDSU West is officially headed for the November ballot,” said Friends of SDSU Spokeswoman Katy Temple. “The Court’s decision confirms what we’ve known all along – SDSU West is in the best interests of the community.”

Both the SoccerCity and SDSU West initiatives will be voted upon on Nov. 6. Should both initiatives receive over 50 percent of the vote, the one with the higher percentage of support will be implemented.