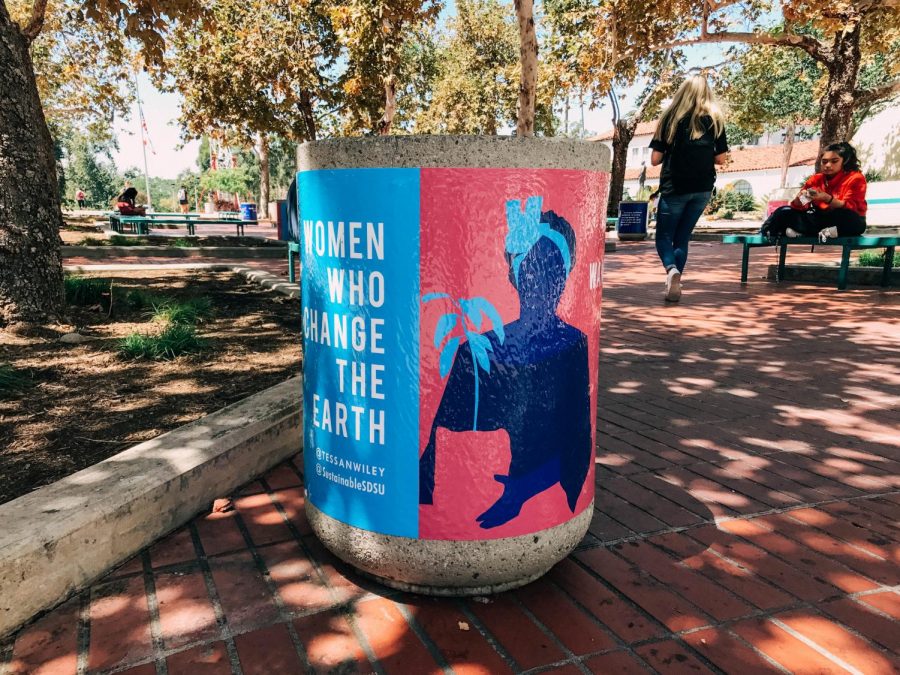 Students returning to San Diego State this semester may notice something different about the recycling bins in the quad near Love Library.

Bins featuring four women who designer Tess Wiley said are fundamental influences in sustainability now adorn the bins, with the hopes of encouraging students, faculty and staff to recycle.

Wiley, who is a sustainability alumna, said the wraps on the recycling bins were inspired by these four and other women who work in the fields of sustainability, activism, ecology, conservation and biology.

“I wanted to use it as a platform to highlight certain ideas as well as certain women, and use it as a way to empower women in science,” Wiley said.

Comparing SDSU to other universities, Wiley wanted to participate in this project not only to “draw attention to the recycling bins,” but also to increase the presence of art in public spaces on campus.

“SDSU doesn’t — at least on the main, central campus — have a lot of artwork,” Wiley said. “Other campuses tend to have student art, or murals around campus and it creates a good atmosphere on campus. It’s just as simple as making it even more beautiful of a campus and bringing some color and intrigue into the main campus area.”

“It kind of brings awareness not only to the concept of taking care of the Earth, which is very literal in the sense of recycling, but also in the sense of empowering individual women that they can be in these roles and have a profound impact on the world,” Wiley said.

Coachella’s Festival Global Inheritance program served as the inspiration to include art on the recycling bins for Travis Freeman, sustainability senior and an intern for Sustainable SDSU in Facilities Services.

“Every year, (Coachella) has their recycling bins that are designed by artists,” Freeman said. “They basically have incentives, based around art, to encourage recycling.”

Similar to the painted benches on campus, one the goals of the program is that the project would also help to improve the university’s aesthetic value, said Tom Abram, assistant director of sustainability.

Plans are currently in the works to expand the recycling art program to more bins across the campus, Abram said. This semester, School of Art and Design lecturer Gary Benzel will work with his students to develop designs to decorate additional bins.

The effort is a part of an ongoing effort to increase the college’s recycling diversion rates, said Abram.

All trash and recycled dumpsters are weighed every time they are picked up, Abram said. In doing this, the school is able to keep track of its recycling diversion rate and compare rates between specific buildings on campus.

“We have a dedicated truck on campus — in the morning, it picks up all the trash, then they take it back to the central station and weigh it,” Abram said. “They also do that with the recycling — they have a separate truck that comes to pick up our stuff and send it back to get weighed. So, we have the recycling rates from that.”

Facilities will soon be launching a dashboard online to see this progress and compare how various parts of the campus are performing, he added.

Current waste diversion rates are at about 34 percent, which includes the compost program. With demolition and construction added into the equation, the rate can be up to 70 percent, Abram said.

SDSU hopes to increase the waste diversion rates to 50 percent by 2020, Abram said. By 2050, the college aims to be carbon neutral, according to the school’s Climate Action Plan.

“Ideally, we’d like to see zero-waste — that’s what we need to go to as a society,” Abram said. “We have some interim goals on that path…we are hoping that (adding) post-consumer compost will help us to reach that goal.