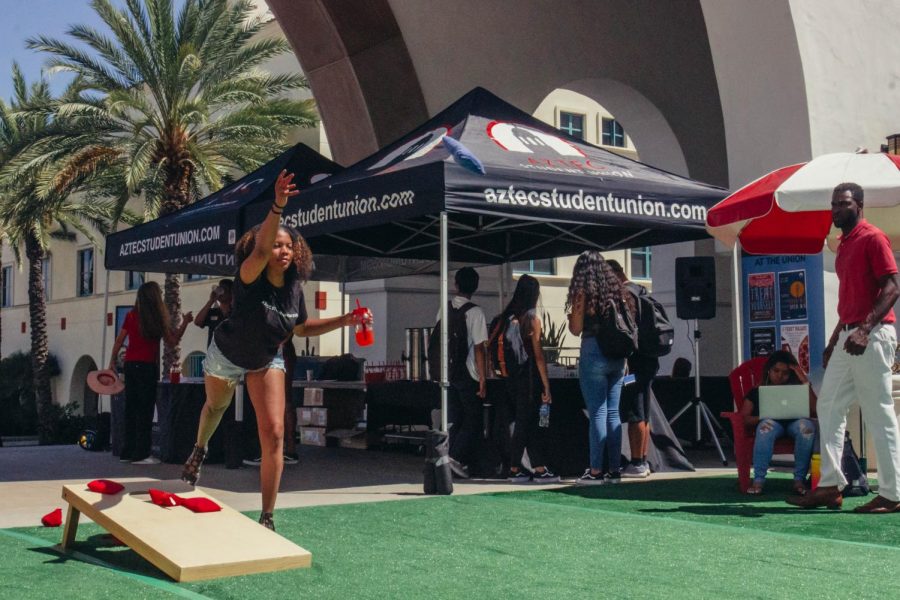 The Aztec Students Union Board brought the party to campus Wednesday, Aug. 29.

Grass replaced the cement plaza in the Conrad Prebys Aztec Student Union and games were supplied. There were bright beach chairs and umbrellas spread out for students to relax on. The Block Party was in full swing with popular music and a cardboard cutout of Zac Efron.

The board holds this event every year at the beginning of the fall semester to show students what their organization is about.

“The block party theme was probably picked because it has an inclusive vibe and it is all about a neighborhood coming together for a party,” Luke Harris, the board’s vice commissioner of internal relations, said. “The union is like our neighborhood of the school, so we get to celebrate it with this block party.”

They also had a scavenger hunt to get students familiarized with the different aspects of the union.

Other than the scavenger hunt, students could play the different games included at the party. Cornhole, spikeball and Connect Four were all set up on the grass.

“The party was pretty nice because I really liked the chairs and the music,” Madison Salmina, a freshman psychology major, said. “My favorite part was the music because it adds to the environment and puts you in a happy mood.”

The Aztec Student Union Board has a variety of other events planned for the rest of the year.   Next up is a free concert in the Student Union on Sept. 5 featuring student musicians.

Other upcoming events include a night of treating students to sweets called Treat Yourself, a showing of  “Black Panther” for Monday Movie Night and a workout session called the Fit Palooza.