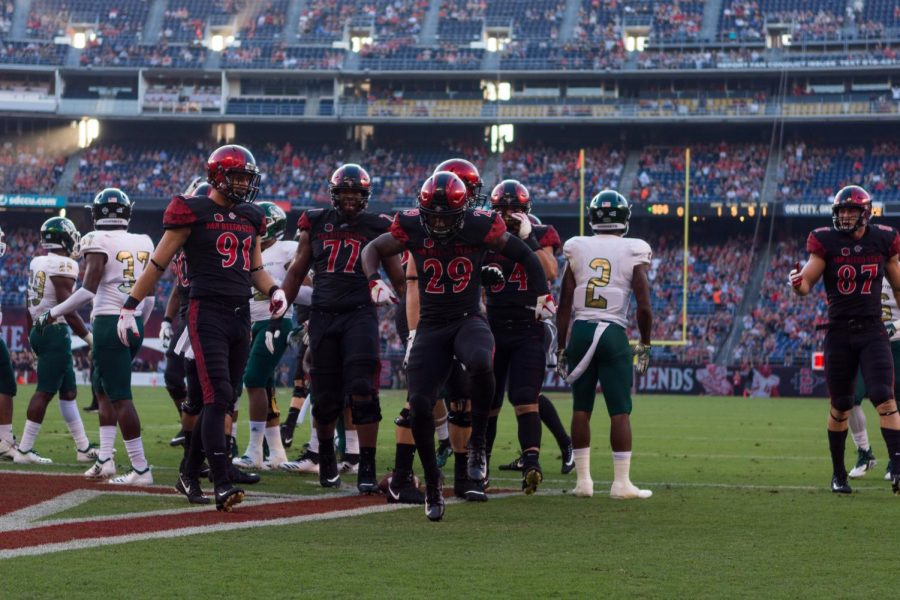 Juwan Washington celebrates after scoring the first of his career-high three touchdowns during the Aztecs 28-14 victory over Sacramento State on Sept. 8 at SDCCU Stadium.

San Diego State football ran away from Sacramento State in the final quarter of the team’s home opener on Saturday night, defeating the Hornets 28-14 at SDCCU Stadium.

SDSU (1-1) trailed 14-13 going into the final quarter, but two late rush touchdowns from junior running back Juwan Washington, including the game-winner with 4:05 to play, helped put away the visiting Hornets.

Washington, who finished with 156 yards on the ground on 36 carries along with a career-high three touchdowns, said the team was able to withstand a good effort from Sacramento State (1-1).

“They came out and played a real physical game. We tried to come back with some punches and they were throwing punches, so we just kept going the whole game,” Washington said. “I think they kind of weared down a little bit towards the end. We were able to finish.”

SDSU overcame losing senior quarterback Christian Chapman, who got knocked out of the game in the second quarter after Hornets sophomore defensive end David Perales went low on a tackle.

Head coach Rocky Long said the Aztecs fought through adversity and did not fall apart after losing their starting quarterback.

“There’s a lot of teams in this world that give in and lose,” Long said. “We didn’t give in. We lost our starting quarterback and didn’t give in. That’s a pretty good sign for the kind of character we have on the team.”

Perales was called for roughing the passer on the play, and Chapman laid on his backside for several minutes before he was helped off.

The initial diagnosis that evening was a left knee sprain.

After an MRI Sunday, the injury was found to be a sprain.

“The good news is that (doctors) think ge’s going to be three to six weeks (out) and he’ll be able to play again,” Long said. “There’s not significant damage to his knee.”

Despite not playing in the second half, Chapman was credited for a win as the starting quarterback, allowing him to pass Ryan Lindley for the winningest quarterback in school history with 24.

Junior quarterback Ryan Agnew was inserted in the game, and finished with 159 yards and two interceptions.

Long said that Agnew did a good job coming in fresh off the bench.

“I think he was ready to play,” Long said. “It’s nice when a guy can come in a play pretty well when he’s called upon. That was really good.”

Agnew said seeing his throws completed feels good, but that it is frustrating to see them negated by penalties.

“Right when you complete it, you think it’s awesome,” Agnew said. “Then, you turn around and hear the whistle and see the flag. It’s pretty frustrating, but that’s the game of football.”

The Aztecs committed eight penalties for 53 yards, but Agnew said that the team fought through their mistakes.

“We shot ourselves on the foot a couple times tonight,” Agnew said. “We just kept bouncing back… eventually prevailed.”

Offensively, the Aztecs struck first on a five-yard touchdown run by Washington in their second drive of the game to give SDSU the 7-0 lead in the first quarter.

The drive looked to be stalling with the Aztecs facing a 2nd-and-26 from the Hornets 48 yard line, before Washington broke a 30-yard run to get SDSU into the red zone for the first time.

SDSU finished the game with 429 yards of total offense, while the Hornets finished with 234 total yards.

Running back Bryant Perkinson scored both of the Hornets touchdowns, including a one-yard touchdown run and a 64-yard catch and run from senior quarterback Kevin Thomson.

The long touchdown pass was the lone of the night for Sacramento State, and gave the visitors a 14-13 lead with 8:54 left in the third quarter.

SDSU senior safety Parker Baldwin said that the secondary made strides from their performance last week against Stanford, when they gave up four passing touchdowns.

Editor’s note: The status of Chapman’s injury was updated once the report of the MRI came out Monday.