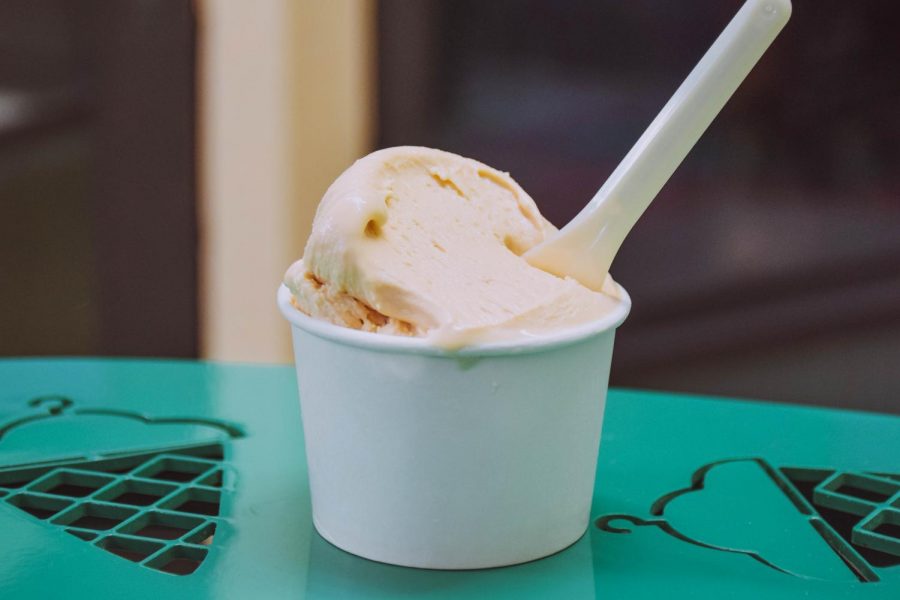 Ever think about what fabrics like cotton, plaid or silk might taste like? The owners of An’s Dry Cleaning in San Diego do, and as a result, they have designed a gelato and sorbet menu to reflect that concept.

Prior to opening as a gelateria on June 1, An’s was an actual dry cleaning business on Adams Avenue for more than a decade. In wanting to seamlessly merge the restaurant into this space, the owners decided to keep the original name as a homage to the previous shop.

“We had originally planned to change the name, but we decided to keep it after doing a little research,” said co-owner Travis Bailey. “We didn’t want to really change the neighborhood that much. Spending time there, we found that it was kind of like a tight-knit community with good vibes.”

A laundry theme has been carried throughout An’s interior design and branding, starting with the logo — an ice cream cone with a hanger incorporated into the scoop.

“Ironing board” tables topped with iron-shaped napkin holders protrude from one wall of the shop, and a clothing rack acts as a room divider at the service counter. Wall art made from fluorescent light bulbs of various sizes and colors along with art deco adornments between menu items complete the classic dry cleaner aesthetic.

“I don’t think you’re going to find any other ice cream or gelato shop anywhere themed as a dry cleaning shop,” Bailey said.

Co-owners Kris Warren, Jimmy Blalock and Travis Bailey have continued the theme by naming all of the flavors after different types of fabric. Together with collaborating Chef David Aguilera, the team takes great care into designing each flavor, Kris said.

“We try to reinvent flavors,” Warren said. “We have a nod to the classics, so it’s not really funky sea urchin gelato, but at the same time, it’s not your standard pineapple — it’s pineapple with basil. We try to make all the flavors almost like each flavor has its own little angle.”

Like the silk that their almond-sage gelato is named after, the offerings at An’s have a distinctly smooth mouthfeel, highlighting the slow churning pace in comparison to ice cream.

Beginning with an off-menu sorbet palate cleanser, guests are led through a carefully-designed tasting that optimizes the ability to taste each flavor without overwhelming the taste buds.

Some of their most creative pairings include the lustring (a carrot and orange sorbet with hints of ginger and mint), felt (ricotta, fig and balsamic gelato) and plaid (a Mexican hot chocolate-inspired gelato with pepper, cinnamon and honey).

“Since we opened, one of the most popular flavors is what we call ‘cotton,’” Bailey said. “Cotton is basically milk, rice and cinnamon — it’s pretty similar to a horchata.”

Though some people have lugged their laundry into the shop thinking it is still an actual dry cleaners, most of those who do find the mix-up funny and end up buying a scoop of gelato.

“I think anytime you’re going to a place called ‘the dry cleaner’ and you’re getting gelato, it’s a cool, fun thing,” Warren said. “It’s a cool thing to tell your friends.”

Taking the theme of a dry cleaner even further, the shop has options to enjoy their flavors like one might shop for pants: short, tall or with “starch” — the house-made, gluten-free waffle cone. Despite being made from a non-traditional batter, the cones do not lose any flavor value with the omittance of gluten.

An’s will be launching a collaboration menu with Paru Tea Bar on Sept. 22, using their teas to create a new palette of gelato flavors.

“We’re always kind of on a swivel looking out for kind of cool, smaller companies that aren’t big brands that are doing interesting stuff in the (food and beverage) world,” Warren said. “I remember I went into their tasting room and they had all their teas kind of laid out almost in a progressive tasting, similar to how we do it.”

Though the two businesses serve different products, similarities between the two brands made collaborating together a natural fit. Both brands were honored by San Diego Magazine as the best of their dining categories in this year’s “The Best of San Diego” list, and both are small, boutique shops serving high-quality products.

As part of the new laundry list of flavors, the new menu reboot will feature a mango sticky rice-inspired gelato, made with Paru’s genmaicha brown rice tea, and a Thai iced tea-inspired flavor.

“Their Thai tea blend is super flavorful  — it’s not just a regular Thai tea, they do their own custom blend,” Warren said. “Similar to how you get it in a restaurant with condensed milk, we’re doing a really straightforward Thai tea and condensed milk gelato.”

Until the end of October, An’s is offering buy one get one free servings Mondays through Fridays until 6 p.m. to customers who show their student ID. Even at full price, the dynamic flavors and adorable concept make this shop worth visiting.