SDSU campus and nearby neighborhoods hit with water outage 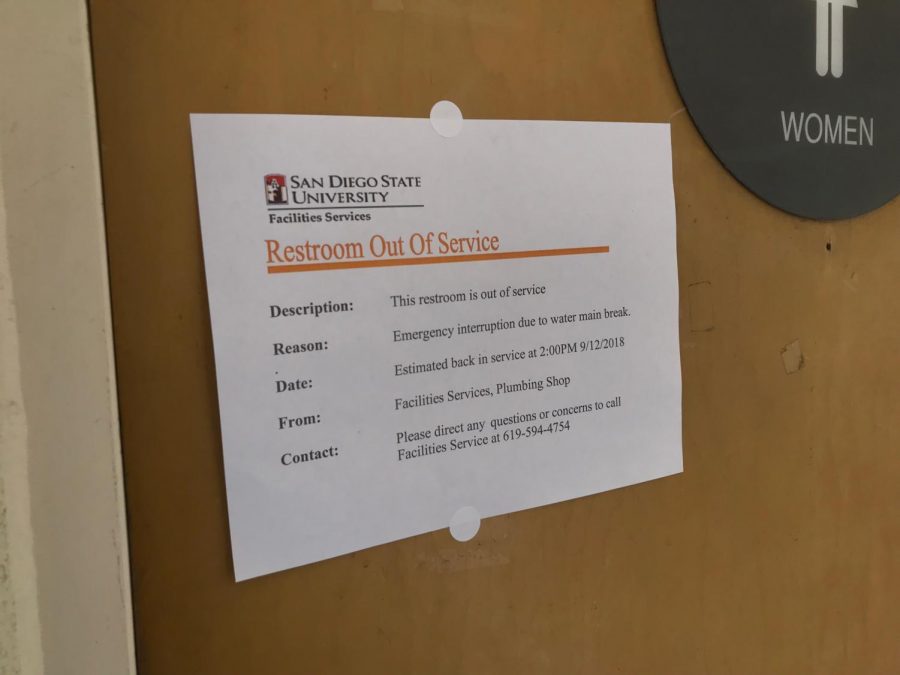 Restooms on campus closed due to College Area water outage.

UPDATED 3:55 p.m.: Updates from the City of San Diego indicate there will likely be fluctuations in water pressure around San Diego State’s campus through at least 10 p.m. tonight, according to SDSU Newscenter.

Portable restrooms and hand washing stations have been made available throughout campus as a result of fluctuating water pressure. These can be found at Cuicacalli, the Fowler Athletics Center, Campanile Walkway near Hepner Hall, Centennial Walkway, South Campus Green, University Towers and Chapultepec.

UPDATED 2:30 p.m.: Classes scheduled for after 3:30 p.m. will resume as normal, according to a university press release.

While many dining facilities are still closed, Aztec Market locations remain open. Students can purchase prepackaged food at these locations.

UPDATED 12:30 p.m.: Water service has been restored in the Conrad Prebys Aztec Student Union, East Commons, West Commons and the University Towers buildings, according to a university press release.

Dining facilities and restrooms are now open in those buildings.

Restrooms are now operating in all residence halls as well.

The College Area, including the entire San Diego State campus, was experiencing a water outage from a broken water main in the area on Wednesday, according to a campus-wide email from Associate Vice President Jessica Rentto.

Facilities Services Manager Chad Dragan said the outage has led to the closure of all restrooms and most dining facilities on campus. All air conditioning on campus is out of operation as well.

Rentto said campus will remain open but classes were cancelled through 3:15 p.m., with additional information to be provided at a later point regarding classes that occur after 3:30 p.m. She said non-essential personnel were free to leave at any point were are encouraged to take the trolley to avoid traffic.

Rentto said it is currently unclear when the water will be turned back on. City of San Diego utilities workers were working to resolve the issue.