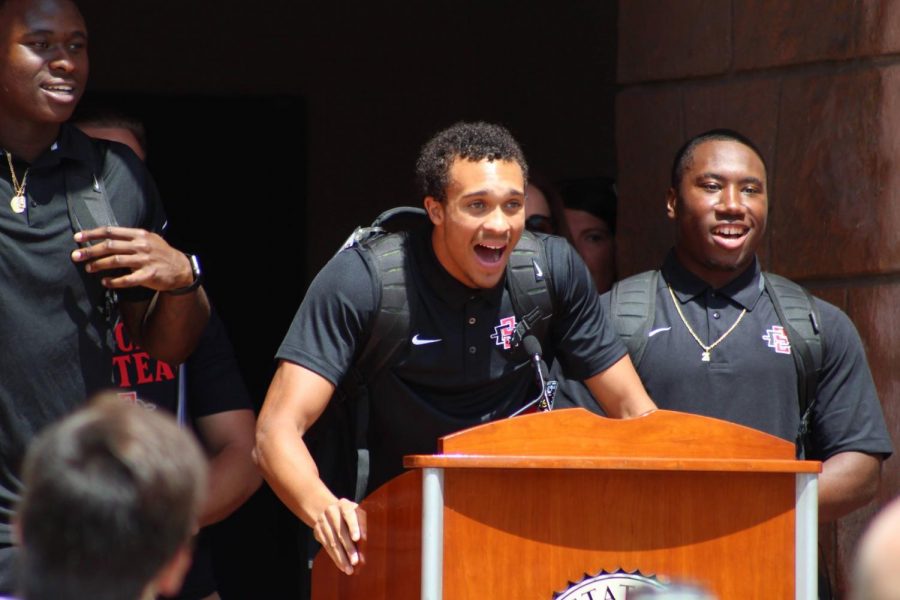 New university President Adela de la Torre put her words to actions on her promise of connecting with the student body by kicking off a new “I am SDSU” campaign, aimed at raising student involvement during athletic and university-wide events.

Students gathered around Hepner Hall on the afternoon of Sept. 6 at San Diego State for a pep rally to kick off the new campaign. The goal was to get more SDSU students involved and excited about being an Aztec and representing athletics as well as academics.

The speakers included de la Torre herself, welcoming all new SDSU students, faculty and staff, Associated Students President Chris Thomas, discussing his goals for this year and former basketball coach Steve Fisher talking about SDSU’s goals as both an athletic and academic school.

The crowd also enjoyed appearances from the cheer and dance team and performances by the Diamond Dancers to live music from the pep band.

“We like to keep our talents hidden here at San Diego State,” Thomas said.

Thomas said de la Torre came up with the idea of the campaign as a way to start her first year at SDSU by highlighting all of the talents SDSU has and the impact it has both on a national and local level.

“Through our actions, we will show students that AS is here for them, cares about them and advocates for them,” Thomas said.

Fisher said it will be the responsibility of SDSU students to be present in the campus community to contribute to the success of the university.

“We need you at events across campus,” Fisher said. “Be proud to be a part of the winning success and great tradition of San Diego State.”

SDSU football players Chibu Onyeukwu, Ron Smith and Juwan Washington were also present at the rally. Ron Smith taught the crowd a new SDSU chant relating to the “I am SDSU” theme.

Washington said the most important thing the students at SDSU can offer the team is their support.

“We really appreciate the support and every time someone comes out and supports us,” Washington said. “It’s good for our team.”

“There is such great pride on campus and we just want to make sure that everyone feels a part of that right away–especially the freshman–the first week they step foot on campus,” Dutcher said. “I think it’s important they feel that they’re apart of something special.”

The Aztec football team beat Sacramento State on Saturday, Sept. 8, 28-14 in their first home game of the season and they will be facing off Arizona State University this weekend.