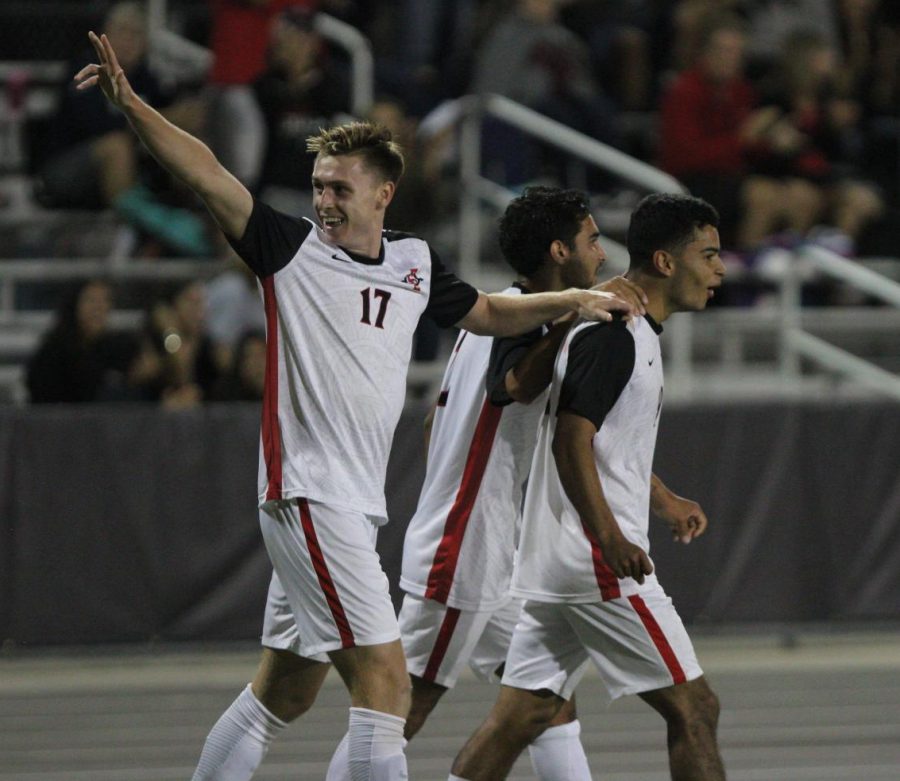 SDSU head coach Lev Kirshner said he was pleased with the team’s play on the night.

“The team is starting to hit some stride…we’re getting better and better each game,” Kirshner said. “This has been our best performance of the year.”

The Aztecs (3-2-1) had an advantage in the attack, landing 18 shots compared to three for Brown.

SDSU also managed to rack up 11 corner kicks, while limiting the Bears (2-2) to just two.

Kelly said the team had a very well rounded performance.

“It was definitely a complete performance,” Kelly said. “It was our first of the year for sure.”

The goal was the first of the season for German, who said he was able to execute perfectly on the play.

“I was able to do a turn and created some space for myself…I thought one more touch and I’ll shoot…it turned out exactly how it was in my mind,” German said.

German scored again only three minutes into the second half.

The opportunity was created when junior midfielder AJ Valenzuela lobbed a ball into the middle of the field, leading to a one-on-one chance for German to slice a right footed shot past Swomley.

Both Valenzuela and German built up chemistry with one another prior to the season while playing for FC Tucson in the summer.

“Once I saw (Valenzuela) on the ball with time and space…I thought it’s going to get to me somehow,” German said. “I was just able to make that run.”

Kirshner said he was content with how well German performed.

“(German) was special tonight,” Kushner said. “He finally hit the back of the net, and for goal scorers’ that’s a really important thing.”

The Aztecs held the ball efficiently throughout the match, which Kirshner said attributed to the team’s success.

SDSU now has ten days of rest until their next match against UNLV, hosting the Rebels on Sept. 24 at the SDSU Sports Deck.