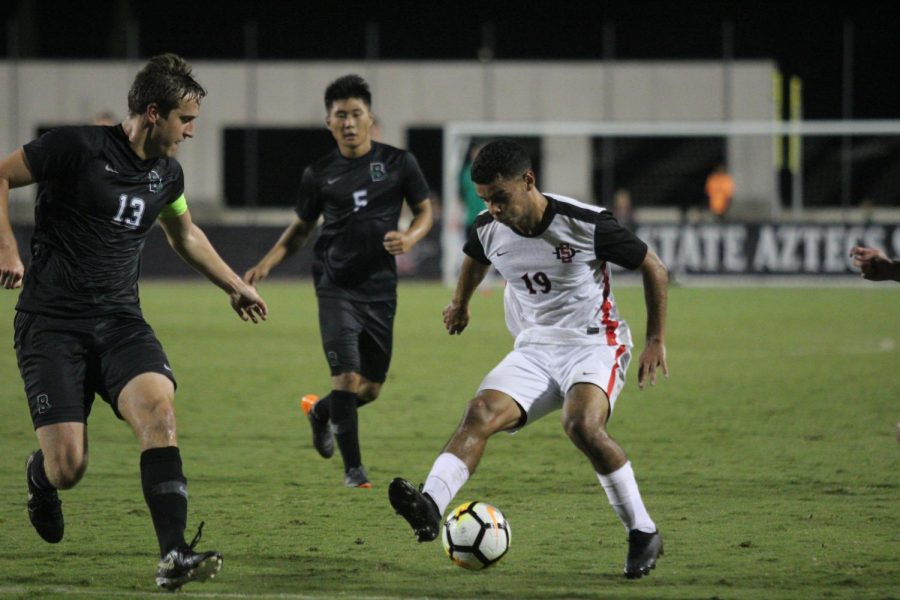 Senior forward Damian German dribbles the ball during the Aztecs 2-0 victory over Brown University on Sept. 14 at the SDSU Sports Deck. German had two goals in the game.

The first five games of the season had not been ideal for San Diego State men’s soccer senior forward Damian German.

German had a combined five shots, and of those five, none had been on target.

The transfer from Grand Canyon University was once named Western Athletic Conference (WAC) player of the week, and he left his former school with 11 career goals in three years.

Before that, German scored 31 goals during his senior year at Maryvale High School in Phoenix.

At SDSU, though, things didn’t go according to plan.

“The first few games, it was a little frustrating,” German said.

German said he believed his luck would eventually change, and the support from his teammates kept him motivated.

“The team was always encouraging me,” he said. “Throughout the games they’d always tell me, ‘get the goals, keep your head up and keep working.’”

As German kept working over the five game stretch, he realized the one thing that wasn’t — his jersey number.

“I’ve never worn a high number before like 28. I just felt like it was kind of cursed for me,” German said.

So, on the night that he changed his jersey number from 28 to 19, the senior scored his first two goals as an Aztec, giving his team a 2-0 victory over Brown University, their third win in a row.

Following his performance, German said the new number is something he’ll stick with.

“Damian was special tonight,” Kirshner said. “Tonight he finally hit the back of the net, and for goal scorers that’s really an important thing.”

Kirshner said German’s slow start may have resulted from the senior’s preseason unavailability.

“When you don’t have him all  preseason camp and he doesn’t get cleared for the preseason games, it’s hard for strikers to get in the fold,” Kirshner said.

German’s first goal was set up for him by junior midfielder Emil Kjelker. Kjelker passed to German, and after one look at the defense and the goalkeeper, German turned, separated from his defender and found the back of the left side of the goal.

“I was able to do that turn and  I created some space for myself and I realized it,” German said. “(I thought) ‘oh another defender was coming in hard, (so) one more touch and I’ll shoot.  I’ll have the whole near post open because the keepers going to cheat.’”

14 minutes later the forward netted his second goal of the night. This one assisted by junior midfielder AJ Valenzuela. German was able to get behind the Brown defense for a one-on-one chance against the opposing goalkeeper.

The goal was a callback for German, as he said he scored one like it before with Valenzuela during a summer league match with FC Tucson.

“Me and (Valenzula) played in the summer together and he slipped me a lot of balls, German said. “I had a lot of success with him.”

German will get his first chance to build on his strong play when the Aztecs face off against UNLV on Sept. 24 at the SDSU Sports Deck.