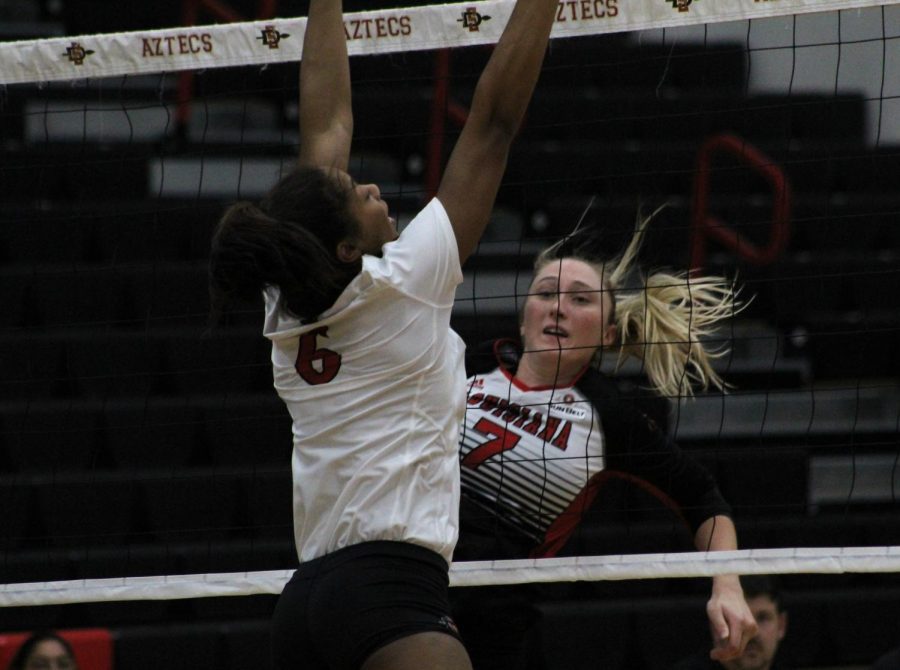 SDSU junior outside hitter Ashlynn Dunbar attempts to block a spike attempt while Louisiana senior outside hitter Hanna Rovira looks through the net during the Aztecs five-set loss to the Ragin' Cajuns on Sept. 15 at Peterson Gym.

San Diego State volleyball lost in five sets to the University of Louisiana at Lafayette on Sept. 15 at Peterson Gym.

During the three games over the weekend, the Aztecs (1-11) lost to Oregon State on Sept. 14 in four sets and UTEP in five sets earlier in the day.

One major bright spot for the Aztecs was senior outside hitter Deja Harris, who set her career high in kills earlier in the day with 20 against UTEP. Against Louisiana, she got 26.

“I am very ecstatic,” Harris said. “Passing did a phenomenal job today…it starts with them”

Harris said she tries to lead the team with confidence and that her teammates should be reassured she has their back.

“If I can have confidence and drill confidence on (the team), they will know not to worry because Deja is on their same side,” Harris said.

The Aztecs were able to force a fifth set after setting the pace with leads of 9-6 and 20-15.

Louisiana (8-6) jumped out to a three-point lead in the fifth set before freshman outside hitter Victoria O’Sullivan delivered a big spike to briefly keep the Aztecs’ hopes alive.

The Aztecs will officially kick off their conference season on Sept. 21, with a home matchup against Fresno State at Peterson Gym.