Songs of ice and fire come to Viejas Arena 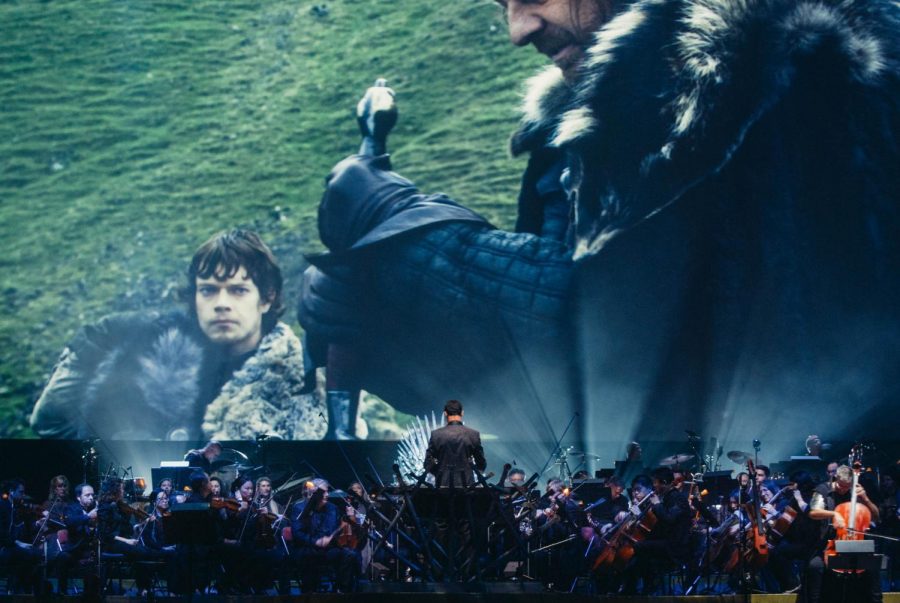 The “Game of Thrones” concert experience came to San Diego State last Tuesday, complete with a live orchestra, and was welcomed by a packed Viejas Arena.

This was the second tour for the “Game of Thrones” concert experience and the first time it had been brought to San Diego.

The blockbuster TV show’s main composer, Ramin Djawadi, conducted the large orchestra and performed many instruments himself, from a sunburst Les Paul electric guitar, to a piano with a pipe organ.

“One of the things I love about writing music for ‘Game of Thrones’ is I get to use a lot of different instruments,” Djawadi told the crowd.

The audience was enthusiastic, with fans dressed up as characters ranging from one of the show’s stars, Daenerys Targaryen, to more minor characters, like Olenna Tyrell.

Communications senior Alicia Hoole said that the “Game of Thrones” score is a vital aspect of the show, and she’s not surprised that the live concert was greeted with such enthusiasm.

“The music adds a layer of emotion and tone to the stories to completely captivate the audience,” she said. “It emphasizes the drama and without it the show would be missing a giant piece of what makes it as epic as it is.”

At the beginning of the show, shown across the big screen was a montage of every “Game of Thrones” character, and Djawadi encouraged the crowd to get involved.

“If you happen to see your favorite character, or a character you do not like at all, we want to hear you,” Djawadi said.

The show had a great deal of theatrics to accompany the music and TV show.

Near the beginning of the performance, the violinist rose up to the ceiling with rose petal confetti surrounding the audience. White confetti fell, too, during scenes in which snow was falling.

Every time Daenerys rode her dragons into battle, pyrotechnics would explode from the stage to simulate the dragons breathing fire.

The most exhilarating effect came when Djawadi got to the pipe organ and used green strobe lights and smoke machines to simulate the memorable “Game of Thrones” scene in which Cersei utilizes wildfire, a fictional explosive, to destroy a tower.

The orchestra also performed other pivotal scenes from the show, like Hardhome, the battle for Winterfell, and the infamous Red Wedding.

Djawadi remarked that the song “Rains of Castamere” has become synonymous with one of the shows’ central families.

“That song basically became the theme for the Lannisters,” he said.

The show was split by an intermission, and the second half heavily featured the most recent “Game of Thrones” season.

The show seemed to have ended with an intense performance of the antagonistic white walkers theme, when Djawadi and the orchestra suddenly played a reprised version of the show’s iconic main theme that opened up the concert. The crowd was once again asked to join in.

“If you recognize the melody, sing as loud as you can,” he said.

As the lights came on and the orchestra walked off, an in-memoriam proceeded to play, featuring the many characters who have died over the show’s seven seasons.

The “Game of Thrones” concert experience was satisfying for any fan of the show who’s waiting for the HBO series to return for its final season in April.