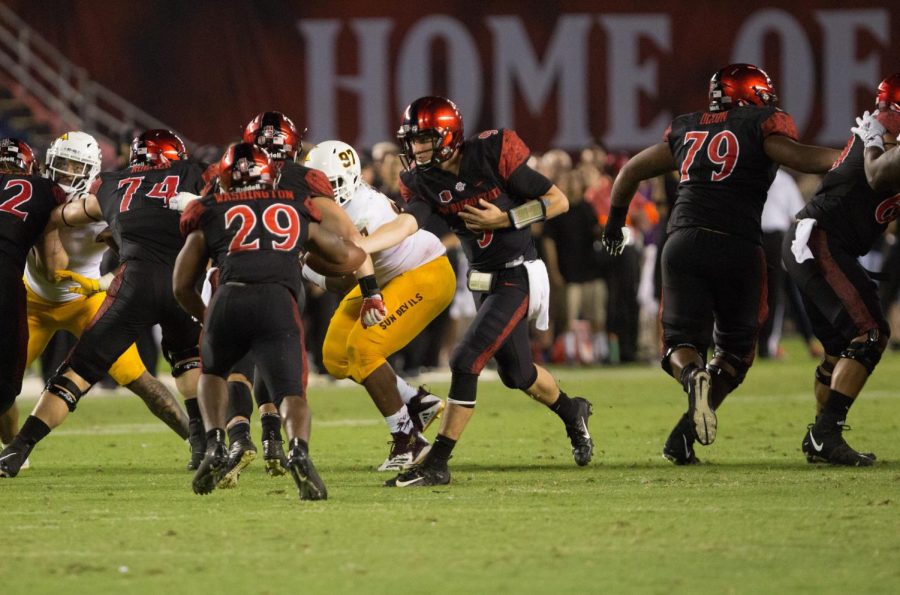 Redshirt junior quarterback Ryan Agnew hands off to junior running back Juwan Washington during the Aztecs 28-21 victory over Arizona State on Sept. 15 at SDCCU Stadium.

The Aztecs (2-1) are fresh off of a home victory that was filled with late-game drama and controversial calls in their 28-21 upset victory against then-ranked No. 23 Arizona State University.

The SDSU ground attack put up 311 yards against an ASU defense that came into that game ranked first in the FBS in rushing yards allowed at 32.5 yards per game.

On the other hand, EMU (2-1) has struggled against the run after three games, allowing 230.7 yards per game on the ground.

Despite EMU’s difficulty stopping the run, SDSU head coach Rocky Long said the Eagles have struggled against spread offenses, which is not the style the Aztecs’ run game uses.

“They’ve been going against the spread,” Long said. “People have a numbers advantage on them in the box, so to speak. We don’t provide that kind of challenge. They can put as many in the box as they want to because we’re all in there, too. We don’t have them spread from sideline to sideline.”

SDSU junior running back Juwan Washington has been battling a turf toe injury from the ASU game.

Washington said the injury isn’t serious and he’ll be available to play against EMU.

“Just recovering,” he said. “Got a little turf toe at the end of the (ASU) game but I’m fine right now. I’ll be ready to go on Saturday.”

Washington heads into Saturday atop many leaderboards among running backs across the nation.

Luckily for the Aztecs, if Washington is not at 100 percent, they can rely on backup sophomore running back Chase Jasmin who rushed for 112 yards on 19 carries and added a touchdown against the Sun Devils last week.

Long said it’s a luxury to have both a starting and backup running back who can produce.

“(Jasmin) proved it to everybody else that he’s a quality running back,” Long said. “The tradition continues, which is a good deal where you have a starter and a backup who both can play.  That’s a great tradition to have.”

On defense, the Aztecs will look to stop EMU’s dual-quarterback system of junior Mike Glass III and senior Tyler Wiegers who are both expect to see snaps against the Aztecs.

Glass III is EMU’s running quarterback and Wiegers is the pocket-passer, so SDSU will gameplan to stop both styles of play.

Aztecs junior linebacker Kyahva Tezino said he is confident Long has a game plan that will do just that.

EMU will play a game in California for the first time in 28 years, and Eagles defensive lineman Ville Valasti said that the team will arrive in San Diego on Thursday for the team to better adjust to the time difference and late start time on Saturday.

“We’re going to get one day ahead,” Valasti said over the phone. “Just trying to get adjusted to the time difference.”

Long said that the time difference means nothing to these young, in-shape football players.

“I’ve been around a long time, that’s all made-up stuff,” Long said. “Scientifically that’s good reasoning, but as a football player (time difference) means nothing.”