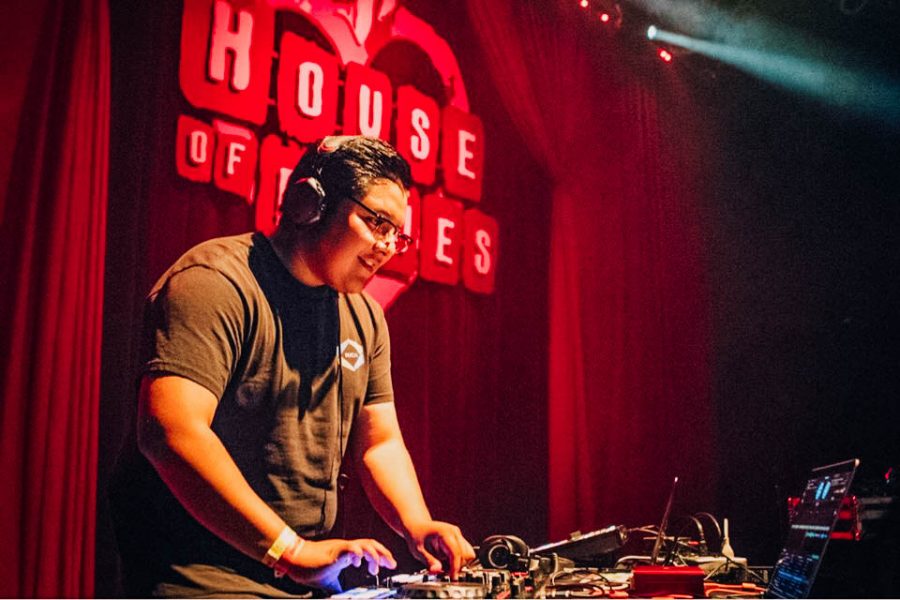 Journalism senior Gustavo Cristobal has only been mixing for three years and is still learning how to produce his own EDM music, yet he’s already experienced notable success.

Since he didn’t become an EDM fan until his senior year of high school. This discovery, however, turned his life around completely, after he had to drop out of Arizona State University.

“I discovered this music and I feel like it made me happy,” Cristobal said, “Some of it is meaningless, some of it actually has meaning to it, and that’s one reason why I love this so much and feel like pursuing it more. Once I get to producing I feel like I’ll become even more happy to express myself.”

At Aztec Music Group’s San Diego State vs. UC San Diego DJ battle, hosted at House of Blues in April, Cristobal came out on top in a competition between the most talented DJs at the two schools.

With sounds that energized the crowd and amazed the judges, his ability to mix music is something that sets him apart from the rest. It’s led him to perform at venues like Bassmnt in San Diego and Avalon in Hollywood.

Journalism senior Sarah Anderson, who watched Cristobal’s victory at the DJ battle back in April, found that he delivered the infectious grooves the crowds was looking for.

“(Cristobal) is such a crowd pleaser,” she said. “He knows what the people want and he delivers. It was really clear that he had won the DJ battle before it was over.”

Cristobal recalls a big moment in his life was when he went to the EDM festival Electric Daisy Carnival in Las Vegas and was able to see his favorite artists.

“I wanted to go to (EDC) in 2016, all of my friends dipped out. I didn’t let them stop me so I decided to go out there alone,” Cristobal said. “It made me realize how you need to be more open and actually talk to people. I feel like that’s really influenced who I am now, just because I’m not afraid to do a lot of things anymore.”

This moment was not only a big moment for his passion in music but also a turning point in his well-being.

“That was like the most happy I’ve ever been, and just to get to experience a whole vibe like that, it’s amazing and I’ve been going for the last three years,” Cristobal said.

One of the DJs he saw at EDC, Deorro, is a big inspiration for Cristobal. Deorro is Mexican-American and mixes cultural music with EDM, something he admires. Raised in Temecula, California, Cristobal recognizes his Mexican heritage as a big part of his life.

“(Deorro)’s Mexican like I am, and he started DJing because he wanted to, and he makes Mexican mashups and whatnot,” he said. “He gets Mexican music and mashes it up with some EDM, maybe I’ll eventually get to that too when I learn how to make mashups.”

Although Cristobal has ambitions to play at EDC himself one day, at the moment he’s focused on his academics at SDSU, and plans to graduate by the end of his senior year. He will continue pursuing his future as a DJ as well and is optimistic about the future.

“Everyone’s telling me I somehow stand out compared to everyone else,” he said. “I’m just doing what I like, and if it goes somewhere, cool. If it doesn’t, I’m not tripping. For the most part, I just want to influence people in some type of way, whether it’s my music or my field of study. I just want to make an impact on someone’s world.”