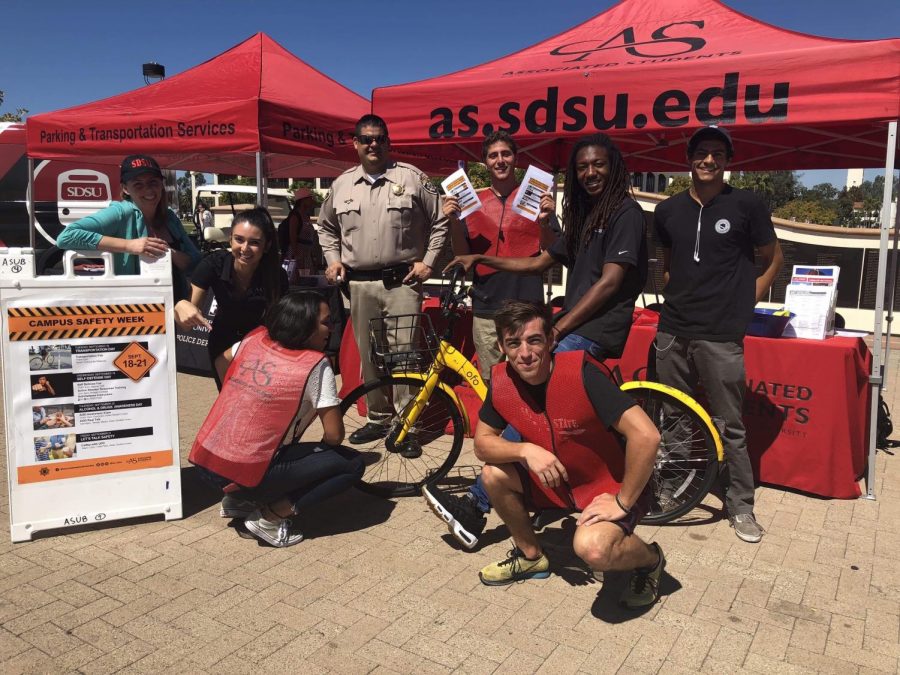 SDSU students gathered with SDSUPD and Associated Students for Campus Safety Week from Sept. 18 to 21.

Associated Students hosted the second ever Campus Safety Week from Sept. 18 to 21 in an attempt to raise awareness of campus safety procedures ranging from transportation safety, self-defense and even the potential threat of an on-campus shooter.

“We want students to know their voices are heard and we are providing various resources for them,” Good Neighbor Vice Chair of A.S. Campus Community Commission Parnaz Boroon said, “We started it last year, and we thought we needed it because we needed to raise awareness about safety on campus.”

Each day of the four-day event focused on a different aspect of campus safety.

“Our goal is to increase awareness about safety resources and options on campus and draw attention to certain topics that students might be interested in, whether it’s transportation, self-defense, alcohol and other drugs,” university police spokesperson Raquel Herriott said.

Some of the week’s interactive events, like “Drug and Alcohol Awareness Day” and “Coffee with UPD,” allowed students and attendants to interact and get to know SDSUPD officers. This interaction is something that SDSUPD police Lt. Matt Conlon said he believes is important to students and community members.

“(Campus Safety Week) is an opportunity to be out here in the public to meet people and get some exposure to the students so that we are more approachable,” Conlon said. “Any opportunities we have to come out and meet people and talk to people is time well spent.”

Mathematics teaching sophomore Alex Welch said informational expositions like “Drug and Alcohol Awareness Day,” were good lessons in being safer in the community.

“I learned that the potency of alcohol and drugs is the same,” Welch said. “The amount you have doesn’t matter, it’s the potency. If you think you’re good, you might not be. Just get an Uber home.”

Political science graduate student Casper Andersen saw the information from the events as knowledge students may already know, but felt like it was a good idea for A.S. and SDSUPD to reinforce the safety procedures.

For the future, Boroon said she hopes the event will become more notable and attract more people.

“I think it’s really important for people to know about,” Boroon said. “I know it’s been really hard for us to get the word of Campus Safety Week out, especially since school just started. So, the goal is that by next year, we’ll have the word out so we have more people attending.”