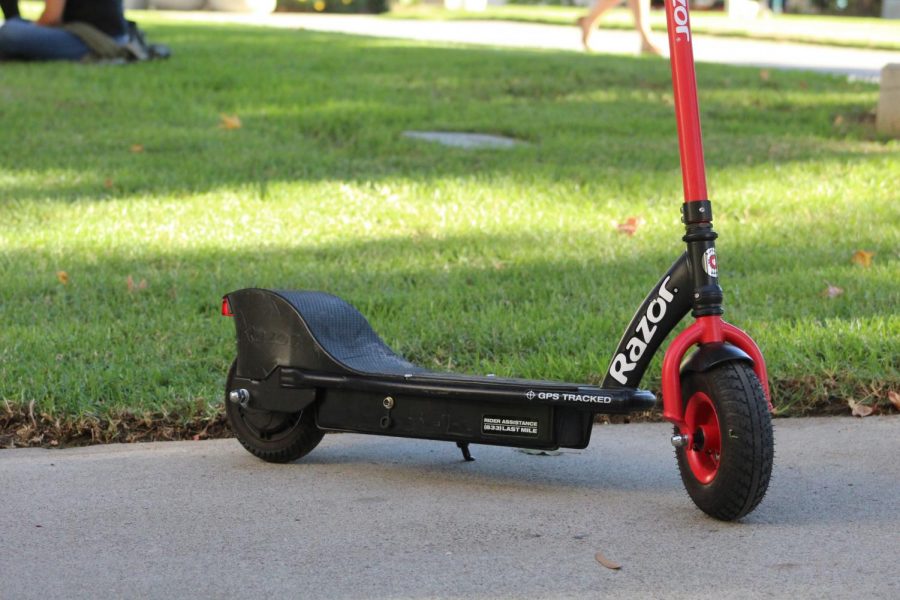 The presence of dockless Razor scooters on campus has increased in the past month, despite not being regulated by the university.

Electric Razor scooters are the latest addition to the list of dockless transportation options that have been introduced to San Diego State’s campus.

Razor’s electric scooters launched in San Diego in late August to compete with other popular electric scooter companies, such as Bird. San Diego was Razor’s second launch location, and the scooters have quickly made their way onto campus in the past month, despite the university not having a partnership with the company.

“They came out of nowhere,” Associated Students Green Love and Sustainability Commissioner Cassie Weinberg said. “All of the sudden, there are a lot of them.”

SDSU does not have a partnership with any electric scooter company on campus, but the scooters are a popular form of transportation for many students. Currently, the university only has a relationship with the bike sharing company Ofo that began earlier this year and reported more than 40,000 rides and 5,000 users in the beginning two months of the partnership.

“The purpose is to make students have their on-campus commute a little bit more attainable,” Weinberg said. “If they live right off campus, it will make things a little bit easier than driving to school and causing more traffic congestion and carbon emissions.”

According to Razor’s website, the scooters are different from other companies’ scooters because they feature air-filled front tires, a steel frame and a deck wide enough for two feet to stand side-by-side. Razor also has local team members committed to charging, inspecting and maintaining the scooters every night, similar to the competing dockless scooter company Bird.

“They are the most reliable,” Johnson said. “They go quicker than all the scooters that I’ve been on and the charge lasts the longest.”

Johnson also said he uses the Razor scooters frequently to get to and from campus.

“I use the scooters to get from my apartment to class,” Johnson said. “I live super far away, and I don’t have my car with me, so it’s pretty economical and saves a lot of money.”

However, some students, like nursing junior Frederick Dillon, are opposed to the electric scooters.

“They are great alternatives,” Dillon said. “But what I’ve noticed is that students often park the scooters in ridiculous places. Sometimes the sidewalks are really small – they would park it on the sidewalks, and as a result, they block the way and make it more congested.”

While Bird scooters remain the more popular choice for students, aerospace engineering freshman Jonathan Morales said if he needed to, he would give Razor scooters a try.

“Yeah I would try it,” Morales said. “Bird was the first one that I got the app for, and they are pretty much everywhere so I didn’t feel the need to get the Razor app. But, I’m not opposed to Razors.”

As of now, Weinberg said the university has no plans to partner with an electric scooter company due to security problems and need for strict regulations.