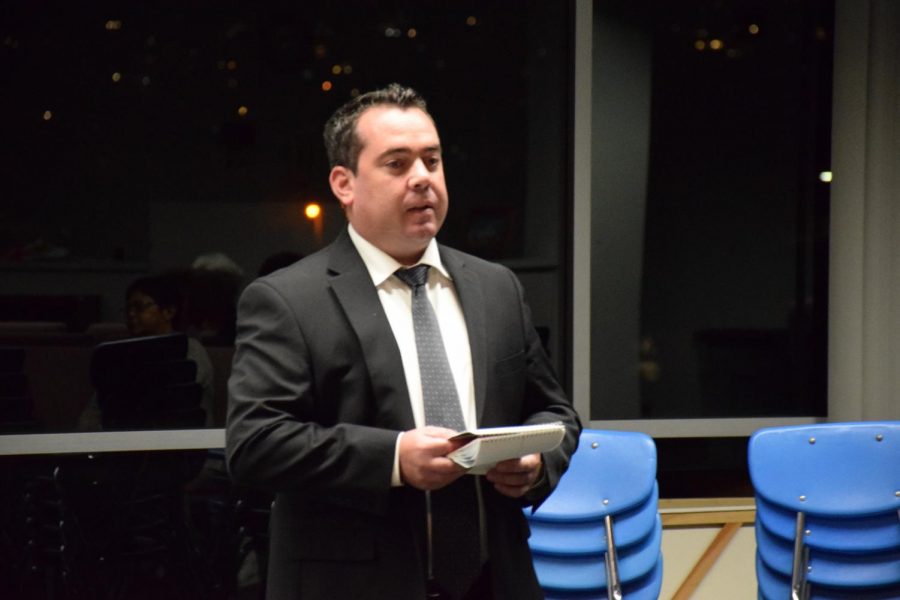 Corporal Mark Peterson from the San Diego State Police Department speaks to the College Area community during an event on Oct. 16.

Grievances from local residences and updates from local police units were shared during a College Area Community Council meeting at College Avenue Baptist Church on Oct. 16.

In light of recent criminal events on campus and in the College Area, Cpl. Mark Peterson from the San Diego State University Police Department said security checks are currently being conducted in the residence halls at SDSU.

“We’re currently in the process of conducting physical security assessments in all of our residence halls to make sure our residents are safe in their homes while they’re on campus,” Peterson said.

Laws regarding electric scooters, such as those available from dockless vehicle companies like Bird and Lime, are being increasingly enforced by San Diego Police Department officers, SDPD Eastern Division Lt. Ricky Radasa said.

To receive updates on any local health or safety concerns, Peterson said local residents can sign up for SDSU alerts.

In response to criticism from community members regarding the actions of police on duty, Radasa said recruitment for the San Diego Police Department continues to be a struggle.

“It’s tough because, when you see the media, anytime an officer does something that’s teeter-tottering (on force) — force never looks good, even if it’s justified,” Radasa said. “It’s tough and a lot of people don’t want to take the risk. There’s a lot of other careers that they can do that are safer, easier and pay a bit better with better hours.”

Representatives from SDPD are recruiting on military bases and college campuses, as well as using Instagram and Facebook as recruitment tools.

Despite difficulties with obtaining new officers, seven officers will be added to the SDPD Eastern Division, all of whom have college degrees, Radasa said.

“Our qualifications have not gone down — that’s one thing that they do not want to happen,” Radasa said.

Peterson also responded to a complaint that had been filed about a lack of crosswalk visibility at a construction site on Remington Road at SDSU.

“We have worked with our housing department to increase the visibility there and get higher compliance with people using the crosswalk,” Peterson said.