Hockey takes down USC with 7-2 victory 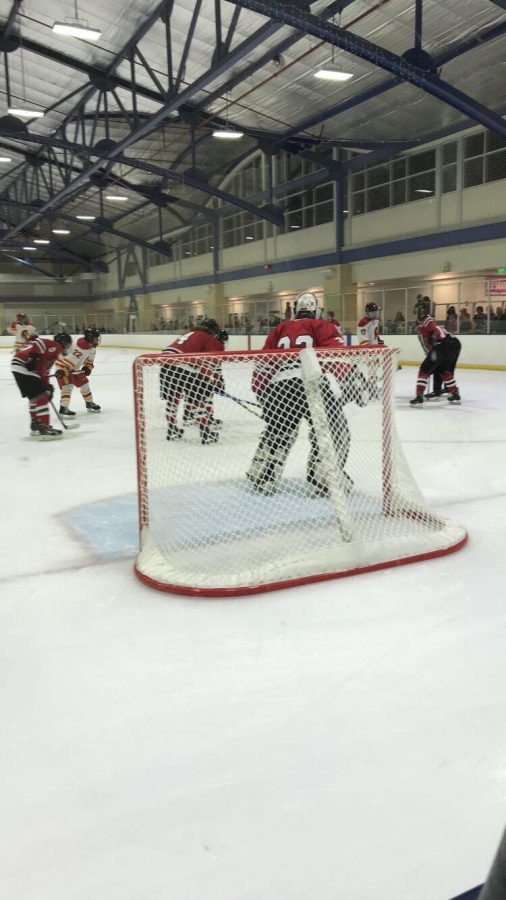 The Aztecs prepare for a faceoff in their zone during a 7-2 victory over USC on Nov. 2 at the Joan Kroc Center.

“I think for the overall aspect of the trip it made us better,” left winger Patrick Miller said. “Now we play a lower caliber team and we came out and did this to them, we felt good.”

The Aztecs are 3-0 at home, as the home crowd seems to elevate their performance.

“Personally I love the crowd,” right winger Derian Theberge said. “It’s super cool having people cheer for you. I think it helps me a lot.”

The game started fast, with both teams delivering shot after shot with no results. The first period was a battle between the goalies, with both teams marching back into the locker room praising their respective goalie with the plethora of saves made.

Before the start of the second period, head coach Phil Bateman told the players they “were working a bit too singular… were trying to do it all themselves.”

Bateman instructed them to move the puck more, work off puck more, and stick to the game plan. The Aztecs came firing out of the intermission and finally broke the deadlock in the eighth minute.

Instantly after the goal, the Aztecs regained control of the puck at face off, and center Aaron Mayer snuck the puck past the goalie just 13 seconds later to make the score 2-0.

With the rapid change of score, right winger Derian Theberge used the newfound momentum to make the game 3-0 with help from a USC tripping penalty.

USC got a goal back after a SDSU defensive gaff made the score 3-1 at the end of the second period.

Confident with their dominant second period, the Aztecs had a blazing start to the third period as defenseman Tyler Smith, Derian Theberge, Aaron Mayer, and Patrick Miller all scored a goals to prevent any further comeback and improve the score to 7-1.

USC capitalized on a 5 on 3 powerplay late in the third period to finalize the score 7-2.

Tomorrow night, SDSU and USC will play again, and Bateman cautioned his team that “it’s always a bit of a trap when you play the same team back to back. After you do that to them on game one, because human nature or not, you take it a little bit easier. It’s gonna be our red flag tomorrow. We got to caution that.”