Senior goalkeeper coming up clutch for the Aztecs 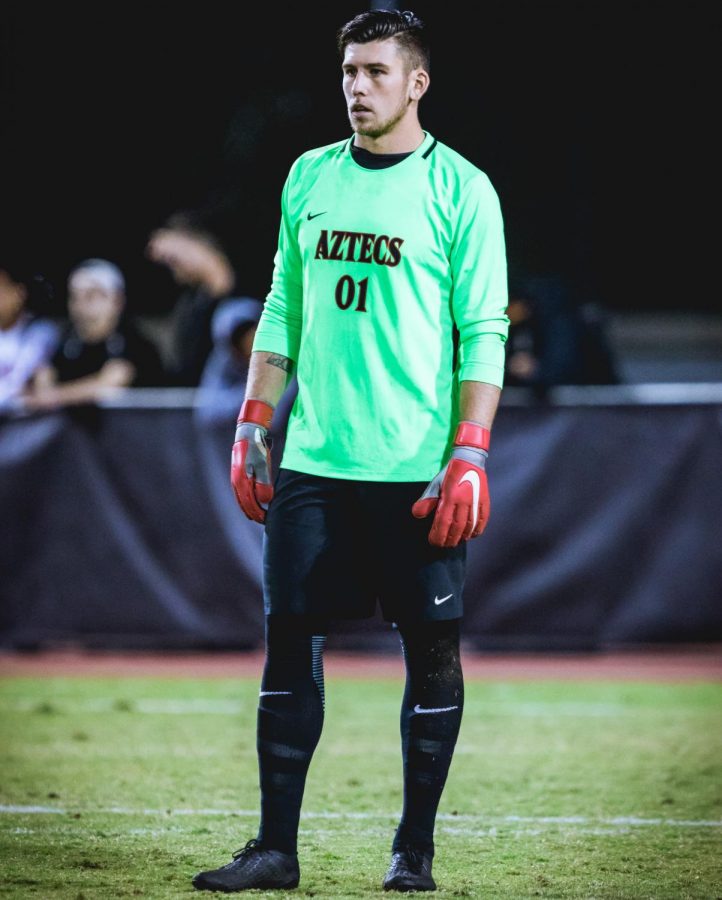 Redshirt senior goalkeeper Cameron Hogg during the Aztecs 2-0 loss to Stanford on Nov. 1 at the SDSU Sports Deck.

The redshirt senior goalkeeper is part of the reason why opposing teams struggle to score against SDSU.

The 6-foot-2, 200 pound New Zealand native is just one of many international pieces that the Aztecs have on their roster.

In ten matches Hogg has tallied a season high 28 saves defending in goal.

Hogg’s latest performance for SDSU was against No. 6 ranked Stanford on Nov. 1 at the SDSU Sports Deck.

Despite the night ending in a 2-0 loss, Hogg finished with a season high five saves in the match. He said it was nice to be back on the field after spending time on the sideline.

“It did feel fantastic to be back out on the pitch,” he said. “You wouldn’t be a footballer if you didn’t hate being on the bench.”

Hogg enjoys playing goalkeeper for SDSU, but disliked being placed in the lineup due to redshirt junior goalkeeper Max Watkin suffering an injury.

“I thoroughly dislike winning a position on an injury,” Hogg said. “That for me is not true. I would rather win a position on my work ethic, commitment and performances.”

Hogg leads the way amongst all goalkeepers for SDSU with a total of 963 minutes played this season.

“From the day that he lost the job he never stopped being a great teammate,” Kirshner said. “He never stopped training hard and got himself fully prepared for his moment.”

Hogg’s leadership and seniority is what every soccer team needs to dish out competitiveness every day on the grass.

Hogg is thankful for having someone like assistant head coach Matt Hall to push him and fellow teammate Max Watkin reach their highest potential.

“With the help of Matt Hall both of us are now the best goalkeepers we have ever been,” he said.

Prior to joining SDSU, Hogg played two seasons at the University of Buffalo in New York. He finished with a 4-6-2 overall record while averaging about 23 saves each year.

During high school, Hogg led Mt. Albert Grammar School to an 11-1-2 record in his senior year.

Hogg excelled in other sports such as track and field where he competed in the long jump, 400 meters sprint and 4×400 relay races.

There are just a few games left to play this season. Hogg said he plans to finish his senior year strong and help the team end on a high note.

“We need two wins out of this,” he said. “We need to be sent out properly. The lads need to understand that there is everything to play for.”

The next game for Hogg and the Aztecs will be against Cal. State Berkeley on Nov. 4 at the SDSU Sports Deck.