Hockey cruises to 6-2 victory over Trojans 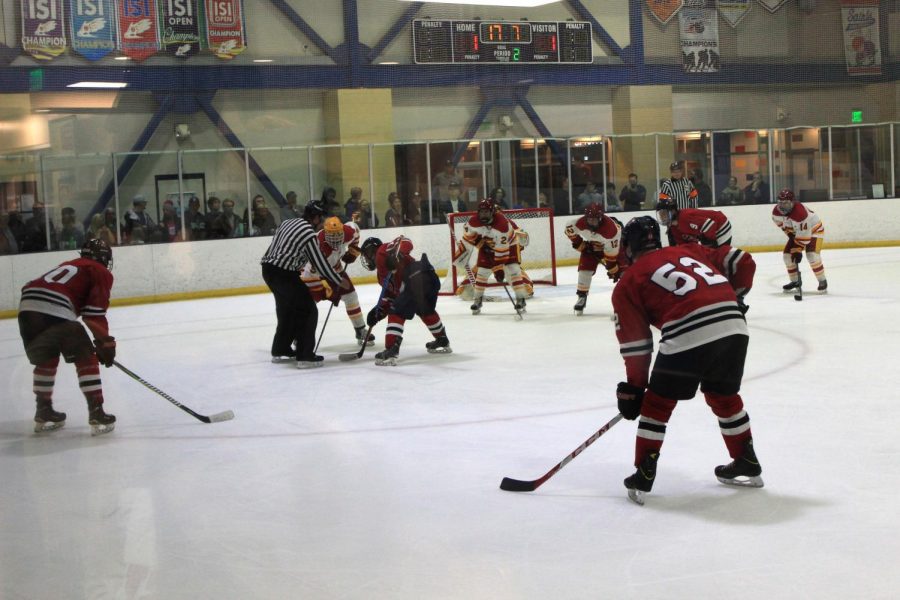 The Aztecs prepare for a face off against USC in the second period of a 6-2 victory over the Trojans on Nov. 3 at the Joan Kroc Center.

San Diego State hockey exploded on offense late during a 6-2 win over University of Southern California on Saturday night at the Joan Kroc Center.

The Aztecs took on the Trojans for the second time in as many days, and looked to build on their momentum coming off a 7-2 victory.

Head coach Phil Bateman said his team was not at its best to start.

“They were flat,” he said. “I think ultimately, if anything, physically they just didn’t have what we are accustomed to, but also mentally we weren’t as sharp.”

The Trojans strategy seemed to spark the Aztecs, however, and the home team began to fight back.  Both side were guilty of multiple penalties in the first period.

After a scrum in front of the USC net, the teams were forced to play 4-on-4 hockey.

“I got (the puck) and remember putting it once through the defenseman’s stick, and then next thing I know, I put it on net over the goalie’s glove,” Smith said.

There was another brawl in front of the Trojans’ net toward the end of the first period. SDSU was given a penalty and USC took advantage of an ensuing power play to tie the score at 1-1 with 1:51 left.

The Aztecs appeared to struggle maintaining their discipline during the second period, committing another three penalties, which allowed USC to control the flow of the game.

SDSU had several chances, however, but were not able to connect on any of them as the period ended the same way it started, 1-1.

The Aztecs were finally able to break the tie in the third period, after Devyn Taras notched two quick goals to make the score 3-1.

USC answered back with a goal of their own, but the Aztecs’ offense exploded with two more goals, including one off a penalty shot, to make the score 5-2.

Taras secured a hat trick by scoring on an empty net for the final goal of the game.

“It was incredible,” Taras said. “I was right where I like to be.  In front of the net. I was just in the right spot at the right time.”