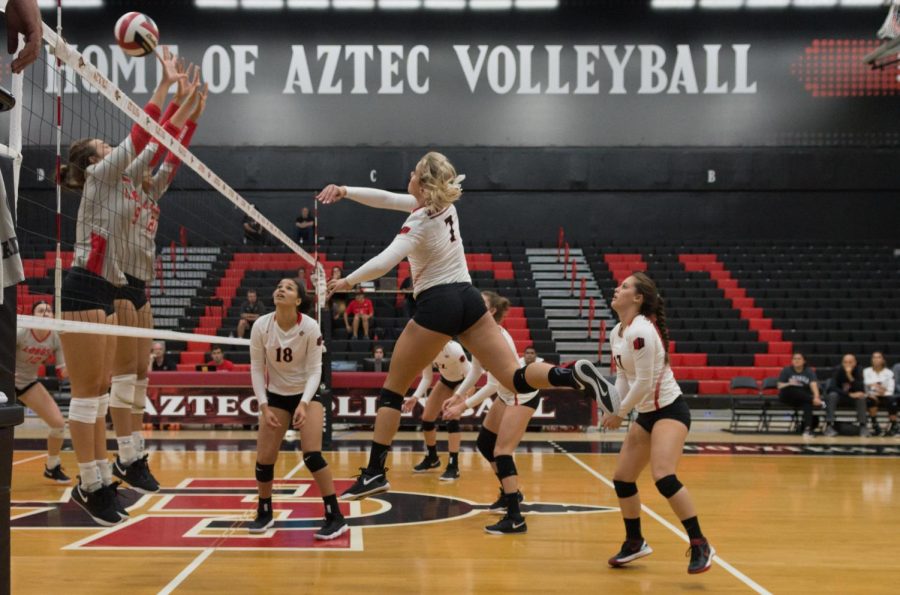 Junior outside hitter Hannah Turnlund spikes a ball over the outstretched arms of the Lobos defenders during the Aztecs four-set victory on Oct. 11 at Peterson Gym.

“We played at times well,” said head coach Deitre Collins-Parker. “Boise came in for revenge. They’re a good team, coming off a really big win (at Fresno State), so they played with confidence.”

The Aztecs started out the game fast going out on a 4-0 run. However, the Broncos would come back to tie things up at 11. The points would increase evenly on both sides, but the Broncos would go on a mini 3-0 run to take the set, 25-22.

“We came together in the huddle (heading into the third set). We said that we were going to make changes,” Harris said. “Our coach decided to make a different lineup (that) were used to.”

In a crucial third set for the Scarlet and Black, Harris scored three straight points, two via the kill and the other due to a block, in the midst of a 5-0 run for the Aztecs. The run would be key as it forced a fourth set and kept the game alive.

“That goes back to my craft as a middle (blocker), so that was…super exciting,” Harris said. “I love my middle position and I love what my coaches given me the opportunities to hit on the opposite end, the outside.”

In the fourth, a 5-1 run put the Aztecs out in front, 17-13, before a timeout was called by Boise State. Despite a small Bronco comeback, the Aztecs were able to come back and tie things up at 21. However, the run would come up short, and the Broncos would win the point and the match.

“(The intensity) was really high, we came into this game expecting a great game and expecting to have to play hard in order to get a win,” said junior outside hitter Hannah Turnlund, who led the way for the Aztecs, with 13 kills.

“We got Emily back in the game and going and she did some really good things,” Collins-Parker said. “We just keep continuing to figure out options that we have.”

The Aztecs now hit the road one final time, playing at UNLV on Nov. 8 and at New Mexico on Nov. 10.