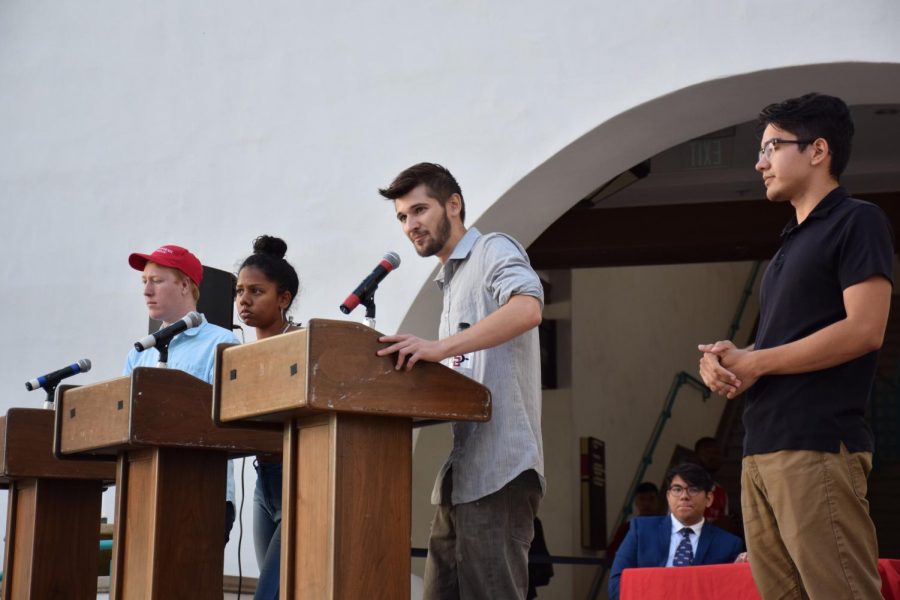 Ryan Orozco, Divya Sriharan, Jake Siewertsen and Anthony Delgado (left to right) and Armando Sepulveda II (back). Representatives from student political organizations met in the student union on Nov. 5 to discuss political issues, including many that will be on the midterms ballot.

Each organization endorsed a California gubernatorial candidate during the debate. The College Republicans and Turning Point both endorsed Republican candidate John Cox for governor.

“John Cox’s platform traditionally consists of a large variety of fiscal responsibility,” College Republicans representative Oliver Krvaric said. “(He) is running on opposition to rent control, pension reform that is actually skyrocketing California’s costs. We are making a surplus, and John Cox seems to take that surplus even farther.”

Represented by Anthony Delgado, the IYSSE declined to endorse any candidate in the gubernatorial race, stating that both political parties are opposed to the organization’s ideology.

“We believe that the Democratic and Republican party candidates are both parties of the financial oligarchy, and they’re both parties that support war, social inequality and attacking immigrants across the nation,” Delgado said.

Another topic debated regarding the 2018 midterm elections was the issue of gun control. Almost nine months after the Feb. 14 mass shooting at Marjory Stoneman Douglas High School in Parkland, Fla., gun control continues to be a hot button issue.

“As individuals, we have the right to bear arms — you should not give that power away to the police or to the military if you think they’re going to protect you,” Turning Point USA representative Jake Siewertsen said. “As individuals, we all have that right and responsibility to use weapons.”

Though he doesn’t support a full repeal of the Second Amendment, College Republican Ryan Orozco said he agreed with the College Democrats’ position of creating restrictions to prevent those suffering from mental illnesses from obtaining guns.

During the debate, panelists were also asked how the federal government should address the caravan of Central Americans currently migrating through Mexico toward the southern border of the U.S.

Sepulveda said those who are coming to the border are doing so because they see the U.S. as the most powerful and generous country available to them.

“There needs to be a necessary process to determine asylum seekers,” Sepulveda said. “But, I believe that sending troops to the border as a campaign stunt is wrong. It’s time we respect our military.”

A previous version of this story misattributed a quote about immigration to Jake Siewertsen when it was actually stated by the Republican representative. The Daily Aztec regrets this error.