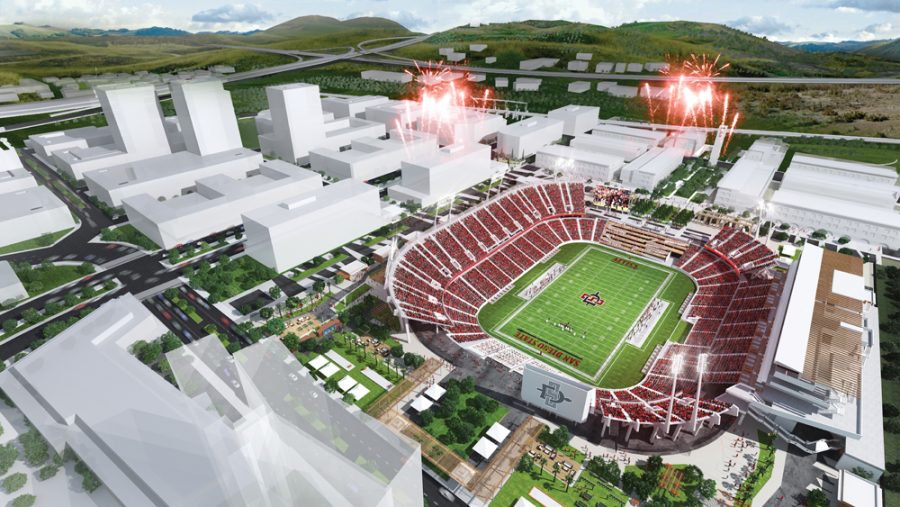 After months of debate over who will take over the SDCCU Stadium site in Mission Valley, San Diegans have cast their votes in support of the SDSU West initiative, or Measure G.

In a statement, Friends of SDSU said this victory is the start of a long process to make the vision of the SDSU West initiative a reality.

“With the overwhelming approval of Measure G today, San Diego State University will now have an opportunity to grow through an open and transparent process that will benefit our economy long-term,” the statement said. “Even more importantly, this vibrant campus expansion will increase access to higher education for generations of San Diegans to come. Tonight may be the end of our campaign, but the work is far from over. Now, it’s time for SDSU and the City of San Diego to work together to make this vision a reality.”

SDSU West supporter Seth Patton said the choice between giving the land to a public institution versus a group of private investors had a clear answer for him.

“When you look at who has the most trusted record for serving the region and for serving our constituents here, it’s SDSU over private, out-of-the-region investors,” Patton said.

This decision gives resolution to the long-standing question of what will happen to the stadium site, something that has been up in the air ever since the Chargers packed their bags and moved North to Los Angeles in January 2017.

The SDSU West initiative was placed on the ballot through signature collection by the group Friends of SDSU, which has no affiliation with the university but is largely made up of SDSU alumni and stakeholders. The initiative permits the sale of the SDCCU Stadium site in Mission Valley to San Diego State or any SDSU auxiliary organization.

Now that the measure has been approved, the San Diego Municipal Code will be amended to allow the property to be sold to the university. The land will be priced according to a price the City Council deems fair and equitable, a figure that will consider the public interest and will be determined in a public meeting.

Under this plan, the stadium will be demolished and replaced by a new stadium. The city would not be responsible for the cost of demolition or construction.

If the university is able to purchase the property, specifics of the development of the site will be subject to the SDSU Campus Master Plan, which does not require city approval.

SDSU’s preliminary plans for the property in the case of acquisition include a 35,000-seat joint-use stadium, which could be expanded should an NFL franchise choose to return to San Diego. SDSU also has plans for a 50-acre river park, 75 acres of open space, 4 miles of public trails, about 1.6 million sq. ft. of campus space, two hotels, 4,600 housing units, approximately 95,000 sq. ft. of retail space and transportation improvements.

“It just made sense that (SDSU) should come and have the first rights to that land and bring us something to be proud of as a community,” Jack Schaeffer, SDSU West supporter said. “Education is far more important than special interests.”