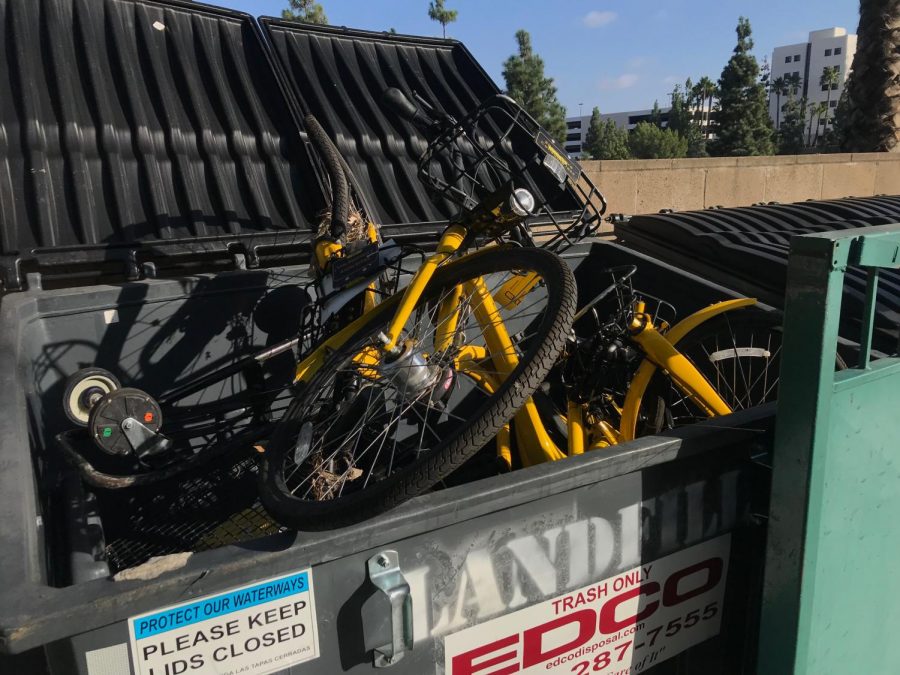 Ofo bikes are often found damaged around campus, something Associated Students Sustainability Commissioner Cassie Weinberg said has contributed to the end of the university's partnership with the company.

A pilot program with Ofo rental bikes and San Diego State has been cut short due to unfulfilled promises and dissatisfaction with the bikes, university administration and student leaders said Tuesday, opening possibilities for new partnerships with different transportation companies in San Diego.

According to an email sent to San Diego State faculty and staff, the bikes will start being removed from campus almost a month and a half earlier than intended. The initial email sent to students said the program was initially intended to last through Dec. 31. The end of the partnership does not prevent Ofo bikes from being brought on campus from outside locations.

Associated Students Sustainability Commissioner Cassie Weinberg said the company didn’t follow through with many of their agreements when the program was first established across campus.

“(Ofo) promised a lot of things,” Weinberg said. “They said they would be the ones in charge of getting (bikes) to bike racks and getting (bikes) out of ravines and whatever kind of things may happen to them. They said that they were the ones who would be responsible and doing all that stuff, but they have not followed through with any of that and that’s why there have been bikes in trees, (being thrown) off parking garages and stuff and they’ve just stayed there.”

Weinberg said conversations have started regarding different options for company partnerships with the university, but SDSU has not made any final decisions, said Weinberg.

Among those options are companies like Lime, which Weinberg said is beneficial because the company provide numerous transportation options. However, she said this does not yet indicate an official partnership.

“The original thought was to have bike sharing as the main thing but it seems like students are more receptive to scooters, so I think that’s why something like Lime would be cool because they do bikes and scooters,” said Weinberg. “I’m sure we’ll explore whatever options are out there in San Diego, but right now, Lime works.”

Some students said they believe the university’s decision to end their partnership with Ofo could possibly help to decrease traffic on campus. Despite not using the Ofo bikes, computer science graduate student Rodney Alacon said fewer vehicles on campus could be safer for students.

“It doesn’t really affect me,” Alacon said. “The only way it affects me is that it’d clear up any chance of collision because I skate around campus with my (skateboard). That just means less chance to get hit by someone else.”

Electrical engineering freshmen Brandon Owens said, with the reckless behavior and lack of rules on dockless bikes, removing them from campus could have definite benefits in increasing student safety.

“I feel indifferent because I always walk on campus and if anything, I feel like the campus would be I guess, in a sense, more safe because there is less people biking,” Owens said. “And, not everyone follows the bike rules so sometimes you have someone biking right next to where someone is walking and that can get dangerous if someone is not paying attention.”

The final removal of Ofo bikes is still being arranged with the company, but Weinberg said the company has been unresponsive to the university’s emails.

Weinberg said it is important to remember there is still a large variety of other sustainable transportation options for students on campus aside from Ofo bikes.

“Trolley, buses and even just either having your own bike (are some options),” Weinberg said. “Or, you can still use Ofo. They’re still bikes. They’re just not the bikes that are best for our school.”

Weinberg said students who continue to bring Ofo bikes on campus are asked to use them responsibly.