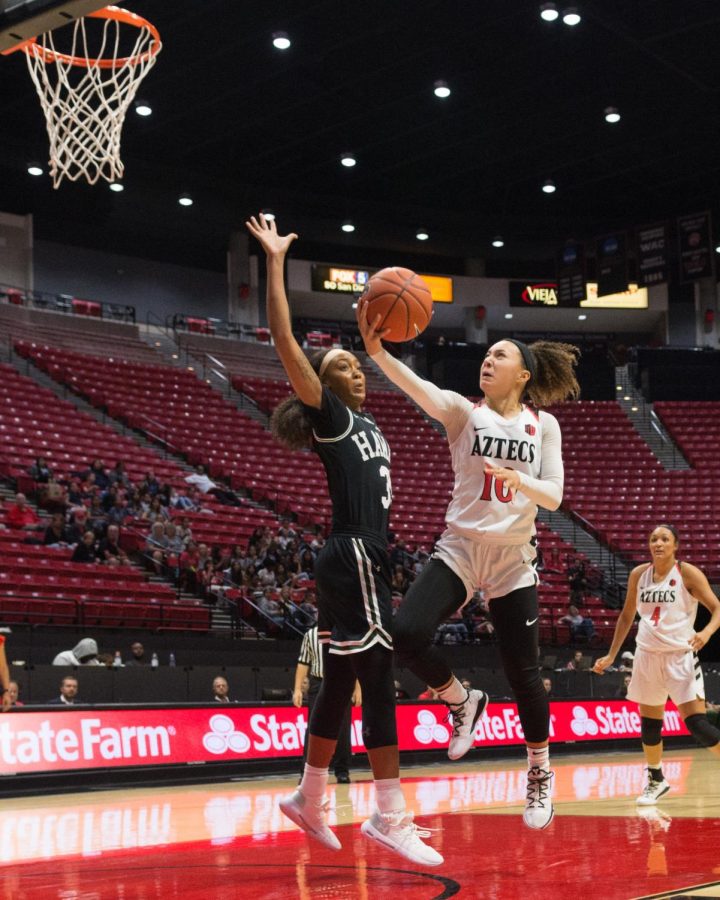 Sophomore guard Naje Murray goes up for a layup during the Aztecs 58-57 victory over Hawaii on Nov. 9 at Viejas Arena.

San Diego State women’s basketball tipped off its season with a 58-57 win against University of Hawaii on Friday afternoon at Viejas arena.

The Aztecs led for over 30 minutes, but found themselves down by one with less than a minute remaining after Hawaii’s senior forward Leah Salanoa got fouled and hit two free throws to capture a 57-56 lead.

“It felt pretty good,” Adams said. “I missed five [shots] before that, but I made that one that counts so that’s all that matters.”

Head coach Stacie Terry said being in a close game this early on will help the team moving forward.

“To be able to win a game early on, tight like this, it’s only gonna help us grow,” Terry said. “Now we can go back and say okay we’ve been in these situations and this is what we like to do.”

In the fourth, Hawaii tied the game 53-53 with 6:10 left. Then, SDSU sophomore guard Naje Murray ripped the ball away from sophomore guard Courtney Middap, passing the ball to Adams, who converted a layup to give the Aztecs a two point lead with just over five minutes remaining.

Murray, who nailed one of her team-high four threes at the first-half buzzer,  has been asked to take on a larger role this season.

“There is a role change from last year to this year to last year. I think that’s important knowing that,” Murray said. “Having to be more of a leader.”

The Aztecs had a 7-0 run in the latter stages of the second quarter snapped by sophomore guard Julissa Tago, who led the Rainbow Wahine with 12 points in the first half.

The Aztecs, however, held Tago to only one point in the second half.

“The adjustment that we made with (Tago) was we were just staying connected,” Terry said. “She comes in and she’s instant offense, so we just were focusing on the second half and making sure we were there to contest.”

Sophomore forward Makenna Woodfolk had sixteen points for Hawaii, but left points at the free-throw line, connecting on only 4-of-9 attempts.

The Aztecs went into the final quarter with a 49-40 lead, but were outscored 17-9 in the period.

SDSU shot poorly in the final quarter, converting on only 30 percent of their shots.

Adams said she would like to see the team play more to its strengths.

“We really need to get to the paint, our offense is really surrounded by that,” Adams said.

Next up for the Aztecs is a road meeting with Santa Clara on Nov. 13.